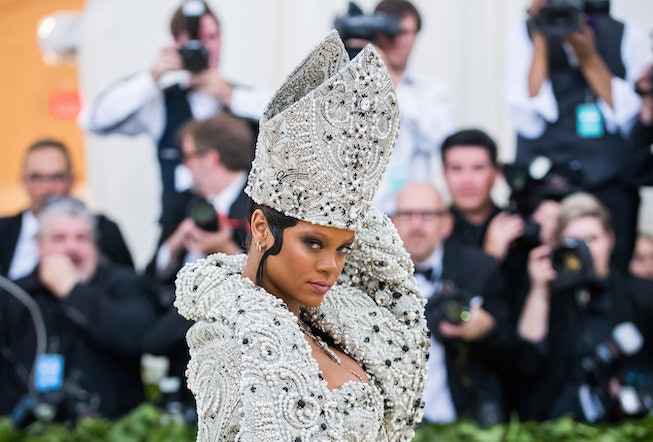 The Met Gala — otherwise known as the Super Bowl of Fashion, or where celebrities finally get to let loose their inner weird theater kid for the evening, is back on for 2021 — which means we can look forward to a smorgasbord of memes and at least one major cultural moment that will be cited for years to come.

The Met Gala is typically held in May, but was canceled last year and this year due to obvious safety concerns — though there was a virtual Met Gala, but God, that’s depressing. The upside: We get two Met Galas back to back, one on September 13 and one in May, both with the same theme. The Met’s Costume Institute is holding a two-part show that will last until late 2021. The first part “In America: A Lexicon of Fashion,” while the second part of the exhibition “In America: An Anthology of Fashion” will explore the history of American fashion from the 18th century to the present.

The Met is pulling out the stops for this year’s hosts, welcoming a slew of Gen Z elites to co-chair this year’s gala: Timothée Chalamet, Billie Eilish, Naomi Osaka, and Amanda Gorman who together probably hit every subsection that exists of the Gen Z population. This year’s theme is American Independence, which is just begging for performance art.

To prepare for what will hopefully be a Met Gala for the ages, we celebrate 10 of the Met Gala’s most iconic cultural moments — including everything from big entrances to fabulous gowns to an the “fall” that launched 1,000 memes. You can watch the 2021 Met Gala stream on Vogue starting at 5:30pm on September 13.

At the 2019 Met Gala celebrating all things camp, Lady Gaga did the most. She blew up the whole idea of an entrance — more so than she already did by wearing a meat dress — by stripping into four different looks, complete with five backup dancers holding her train and carrying umbrellas before stripping to reveal three more layers of outfits that culminated in black sequin lingerie. Did Gaga know a life-altering virus was coming and wanted to leave us with two years worth of entrances? Stefani Joanne Angelina Germanotta, please tell the truth.

The Mysterious Case of Kanye’s Pants

As a noted avant-garde artist, it wasn’t that surprising when Kanye West showed up to the Manus x Machina: Fashion in an Age of Technology themed Met Gala in 2016 in a hyper casual fit of tattered denim jeans, a $2,600 embellished Balmain trucker jacket, and icy blue contacts. Tortured genius thinking (and shock value) works in its own unique ways! There was, however, another accessory on West’s body: an unidentified brown stain smack dab in the middle of his ass. Photos of the aforementioned stained pants are few and far between, which could mean it was either photoshopped — or that it was scrubbed from the internet by affected parties. Secure your tin foil hat!

In the same vein as Gaga, Pharaoh Porter turned his entrance into a stage for performance art, first being carried on a chaise by six shirtless attendants draped in gold before unfurling his wings. (Was Porter was one of those kids who was weirdly obsessed with ancient Egypt as a child? You know the ones.) He told Variety: “Camp means irreverence. Camp means as hugely over-the-top and grand and what some may feel is ridiculous and silly, and embracing all of those creative impulses inside us that very often are squelched.” He should have given Kim K and everyone else who didn’t “get” camp the lowdown.

Instagram has given us no greater gift than getting to see celebrities spill their own tea. Which is exactly what Riccardo Tisci (then-creative director for Givenchy for the uninitiated) did after the 2013 Met Gala, when he posted a photo of him hugging the notoriously private Frank Ocean, followed by a photo of Frank’s bowtie with the caption “Please don’t go.....” next to an unmade bed. This was before Instagram Stories were a thing, so this was all posted to the grid. 2013 was a different time!

Grimes and Elon made their relationship debut at the 2018 Met Gala: Heavenly Bodies: Fashion & The Catholic Imagination, looking awfully like a 17-year-old going through her goth phase with her awkward uncle at a party nobody wanted to go to in the first place. It’s too on the nose for a man hellbent on living on Mars and an intergalactic princess to make their debut at such a celestially-oriented event, but nothing broke the spirits of alt kids worldwide as Grimes wearing a Tesla choker.

Zendaya dazzled on the pink carpet in a light-up Tommy Hilfiger dress at the 2019 Met Gala, serving us full Cinderella cosplay that likely satiated the desire to play a Disney princess in the near future and therefore spared her from getting anywhere near the recent and indisputably cursed reboot film. She even had a fairy godmother — her longtime stylist, Law Roach — who carried a wand that illuminated the dress with a magical wave, along with a bag shaped like Cinderella’s carriage. Corny can be cute, if Zendaya’s doing it.

Seeing Rihanna as Pope at the 2018 Met Gala did more to heal my issues from attending six years of my Catholic school than half a decade of therapy. In Catholicism, you don’t mess with the Pope, who’s basically a saint. Rihanna blew all of that up, wearing a diamond encrusted mitre (Pope hat re: six years of Catholic school), anointing herself as the well-deserved sartorial leader of the Gala. Amen to that.

I’m not one for public proposals (though watching failed ones on YouTube never gets old), but then again, I’ve never been to the Met Gala. The romantic at heart 2 Chainz got down on one knee at the 2018 Met Gala, to celebrate the holy sacrament of matrimony, and propose to Kesha Ward. Thankfully, she said yes.

Jason Derulo Falling Down The Stairs (Kind Of)

Okay, so maybe he didn’t actually fall down the stairs at the Met Gala, but at this point, he may as well have. A much-debunked photo shows someone falling headfirst on a pink carpet, which actually apparently happened at the 2011 Cannes Film Festival, according to Know Your Meme. In 2015, the photo circulated after someone on Twitter spread a rumor that the man was Derulo. Now, every Met Gala, Oscars, Golden Globes, or any photographed event, the meme recirculates. It’s to the point where Derulo should probably just fall down the stairs.