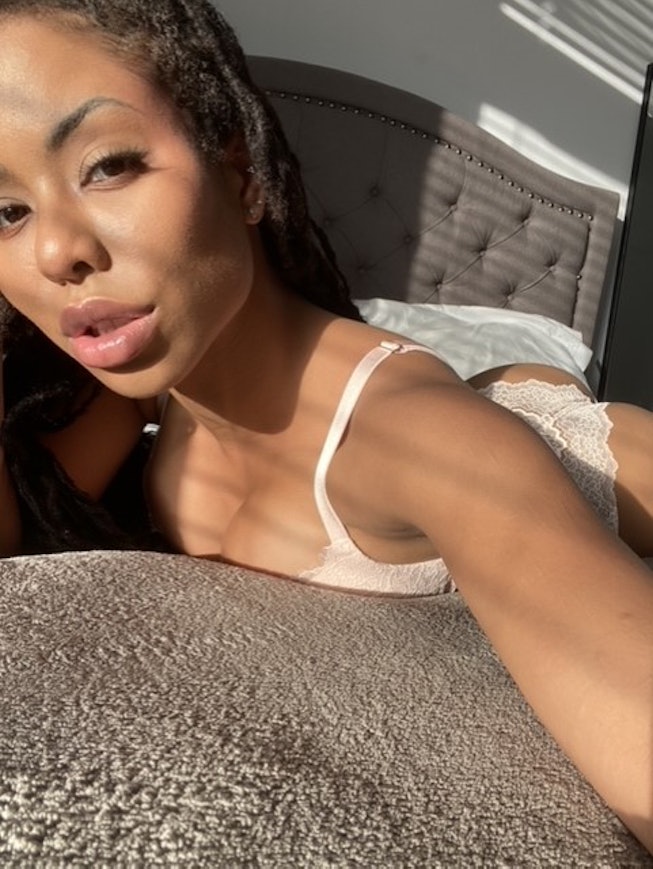 “There’s a good reason why the kink community has had these kinds of conversations for a long time,” Noir tells NYLON over Zoom. “They've had a lot more experience doing more risky kind of sex acts, so it's very, very, very important to make sure that everybody's on the same page.” Oftentimes, the conversation around consent in those cases is recorded and even included in the video. On what she calls “vanilla sets,” this wasn’t always the case.

“Sometimes you would have this kind of fear that if you were a little bit too aggressive with asserting your boundaries, that you would be labeled a diva and people wouldn't want to have you back,” Noir says. “A lot of people were letting stuff slide out of fear. And when OnlyFans exploded, a lot of performers realized they could entirely support themselves with their own content, it became less of a necessity to coddle performers that weren't that great with checking in with their partners or directors that were a little bit too pushy.”

The moment led to “a bit of a Me Too movement,” in the industry, Noir says. “Everyone was calling out the sh*tty people who were repeat violators of boundaries.”

“If you just look at it on the surface, consent is absolutely necessary to any sort of good sex act,” Noir says. “This is what we mean, we say, ‘consent is sexy’ because if you are enthusiastically consenting to everything that's happening to you, and if your partner is enthusiastically consenting to everything that you're doing to them, then everyone gets to have a great time.”

“You don't need to print out a consent checklist before you hook up with somebody. But it is helpful to just say, “This is what I like. What do you like?”

Can you talk a little bit about the “consent checklist” you go through before a scene?

Having these conversations on set has really helped me in my personal life with being more comfortable speaking up with my partners and telling them what I'm comfortable with and asking them questions of what they're comfortable with. The more we have these conversations, the better the sex will be. It doesn't always have to be as clinical as it is on set. We're doing it that way because it is a business, so we're just trying to make sure that we're doing it as cut and dry as possible.

That’s so cool. People aren't used to bringing that kind of stuff up beforehand, I feel like it often happens more in the moment.

“I would say that if you are too uncomfortable to talk about sex, maybe you shouldn't be having sex.”

I want people to feel more comfortable with those awkward conversations and also think about how to integrate it into actual sex. Like I said before, it doesn't need to be exactly how we do it on porn sex. You don't need to print out a consent checklist before you hook up with somebody. But it is helpful to just say, “This is what I like. What do you like?” And then during sex, be like, ‘I really like this,’ ‘are you having a good time?’ Still checking in with your partner. I think you can do that same kind of communication in real time, off camera, normal sex. And keep that idea of being open to criticism, being open to hearing what your partner wants, and being confident enough to be very clear on what you want.

Are there signals you use during shoots to indicate when you don’t feel comfortable?

What would you say to people who are uncomfortable with these kinds of conversations?

I have two answers to that. The first one is not very fun. I would say that if you are too uncomfortable to talk about sex, maybe you shouldn't be having sex.

It's always going to be a little bit scary, opening yourself up in that way, saying that you want your p*ssy licked a certain way can feel very vulnerable. But it's one of those things where once you do it with somebody who is going to be open to that kind of communication and will be able to take that and apply it, it's going to be great. So have your heart beat a little faster for a little bit and continue on to your awesome sex.

We do exit interviews a lot with porn where they'll ask us, “What was your favorite part, is there anything that you thought was really difficult or you wouldn't want to do again?” You could do that with your partners off-camera too, where you can say, “I really liked it when you did blank,” or, “I really liked that we tried this sex act, but I think that maybe it's not really my thing.” A consent can be checked on before, during, and after the entire sex act. I think that whenever you do that kind of thing, it gives you cheat codes to what your partner likes instead of just assuming or trying to guess, and then feeling bad if you don't get it exactly right. If you have the conversations, then you get to have amazing sex. They'll tell you what they want, you get to tell them what you want.

It doesn't have to be super formal like we do on porn sets. I like to try to encourage people to talk a lot about what they like. If you were trying to be gentle about it, you can say, like I said earlier, “I like that we tried this, but I think maybe it's not my thing.” I would also encourage people to not take criticism personally. Instead, if somebody tells you, “I don't really like what you just did there,” go ahead and accept that and be happy that they felt comfortable enough to share that with you. Because again, you don't want to be doing something that somebody doesn't like. Instead of taking it personally and thinking you’re so bad at sex, think to yourself, “Thank God they told me now before I kept doing it.”