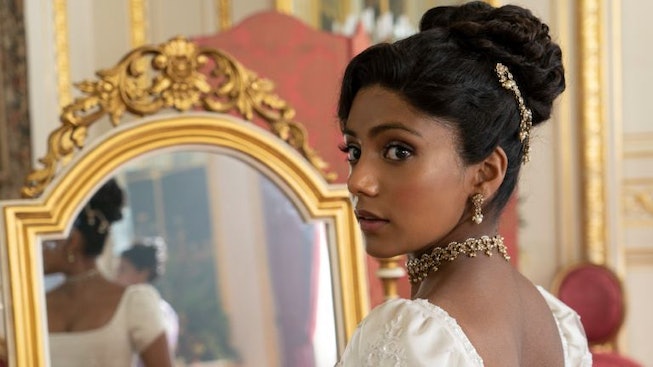 Charithra Chandran is the diamond of the season — both of Bridgerton’s fictional social season, and of the hit Netflix show itself. This season might have less physical touching, but it has more moments that are emotionally touching, one of which happened to be Chandran’s favorite of the season.

Bridgerton is known for its orchestral arrangements of contemporary songs that help to give the show the highbrow-lowbrow quality that makes it so fun. This season promised classical string renditions of classics like “Stay Away,” by Nirvana, “Material Girl,” by Madonna, Rihanna’s “Diamonds,” Robyn’s “Dancing On My Own,” Alanis Morissette’s “You Oughta Know,” Harry Styles’ “Sign of the Times,” and, of course, “Wrecking Ball,” by Miley Cyrus.

But the moment that brought Chandran to tears was the string cover of “Kabhi Khushi Kabhie Gham,” one of the most popular Bollywood songs of all time from the Bollywood film of the same name, that plays at the beginning of Episode 6. “I didn’t cry at any other point except hearing that [song],” Chandran told Teen Vogue.

The song accompanies another major moment in the show in which her character Edwina, along with her sister Kate and their mother, have a haldi ceremony, a South Asian tradition done before weddings where the bride and groom are covered in turmeric to signify their blessings. “I was so taken with the depiction of the whole ceremony. We have literally never seen that in a show like Bridgerton or in this kind of era, and it’s just so amazing and deeply personal,” Chandran said, a sentiment Bridgerton writer Geetika Lizardi and other South Asian writers echoed.

Chandran went on to talk about the significance of her character, and what she hopes Indian viewers will gain from watching. “I know that many young Indian women are brought up with the idea that their priority is to be a wife and a mother and a sister and a daughter. And so for me, Edwina was incredibly personal because I could see a lot of people that looked like her in that position,” she said. “And if they can get anything from this season, it’s that you are much more in control of your own life than you imagine.”

Bridgerton Season 2 is now streaming on Netflix. And for those obsessed with the Ton’s sumptuous gowns, NYLON has you covered with the most fun regency-core fashion.