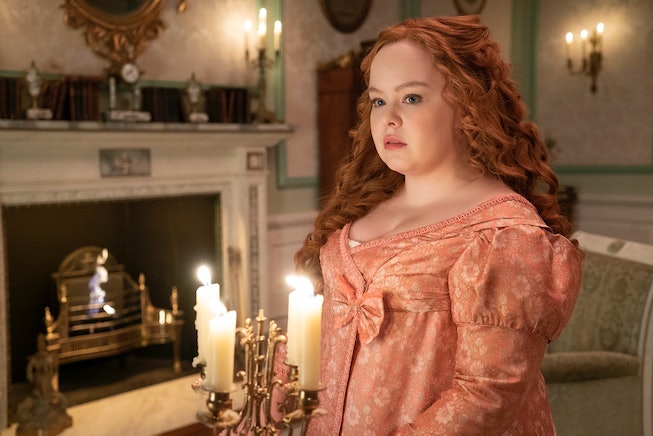 There comes a time in any great book to screen adaptation series when it diverges from the source material. That time has finally come for Bridgerton Season 3. But chances are fans won’t care: Season 2 of the show was Netflix’s most-watched English-language series ever. (It still can’t touch the mania that is Squid Game.)

While Season 1 followed the romantic and NSFW sexual relationship between Daphne Bridgerton (Phoebe Dynevor) and Simon Basset (Regé-Jean Page), Season 2 focused on the love story and tamer carnal relationship between Anthony Bridgerton's (Jonathon Bailey) and Kate Sharma (Simone Ashley). In the books, the third installment focuses on Benedict Bridgerton (Luke Thompson), but the series will diverge, instead focusing on the love story between Colin Bridgerton (Luke Newton) and Penelope Featherington (Nicola Coughlin.)

But that’s not the other Season 3 surprise. The show will also bring on a new showrunner: Jess Brownell, a writer on the show’s first two seasons who has also written for Scandal and Inventing Anna.

There’s no word yet on when the series will air — but Coughlin, aka Lady Whistledown herself, told Women’s Wear Daily she expects to starting shooting this summer, which could mean new episodes in spring or summer 2023. Here’s everything else we know so far about Bridgerton Season 3.

Season 3 will focus on Colin and Penelope’s love story

Coughlin shared the update on Instagram on Monday, writing: "Like Lady Whistledown I've been keeping quite a big secret for quite a long time... but I can finally tell you that @bridgertonnetflix Season Three is Colin and Penelope's Story," she wrote.

“I really feel like it’s Colin and Penelope’s time,” Brownell told Variety. “Because we’ve been watching both of these actors on our screens since Season 1, we’ve already invested in them a little bit. We know who they are as people.”

Season 3 will have a new showrunner

For Season 3, showrunner Chris Van Dusen is exiting and Jess Brownell — a veteran of Shonda Rhimes’ Shondaland, who has been with the company for 14 years — will be taking over.

“I’ve been with the show since Season 1, and it’s my dream show,” she told Variety. “This would be top of my list of shows I would watch if I weren’t working on it. So I’m thrilled that I get to step into this role on this particular show.”

Eight seasons of the show are planned

Bridgerton Seasons 3 and 4 were renewed back in April 2021, following the record-breaking release of Season 1 — but Shondaland has ambitious plans for the series.

“I think Shonda Rhimes has said publicly before that she wants to have eight seasons. We hope to get to tell every sibling’s love story and they will always be in each season,” Brownell told Variety.

Get ready to see a new, recast face

Hannah Dodd will play Francesca Bridgerton in Season 3, taking over for Ruby Stokes who is leaving to star in her own Netflix thriller series Lockwood & Co. Francesca was already somewhat of a fleeting presence in the show, but hopefully we’ll get to see more of her this season. The sixth Bridgerton book follows her love story closely. Dodd has been around Netflix already, most recently in David E. Kelley’s six-part Netflix anthology series Anatomy of a Scandal.

And get ready for even more new faces

In a delightful announcement video from Netflix, Bridgerton cast members welcome three new members to the ball. In the video, former and new cast members hold up three fingers to connote the series’ third season. “You coming in?” Coughlin asks as she escorts James Phoon, who plays the handsome yet dim-witted Harry Dankworth, into a carriage.

Also joining the cast are Daniel Francis, who plays Marcus Anderson, a “charismatic presence who lights up any room he enters,” and Sam Phillips of The Crown as Lord Debling, a “genial lord with unusual interests” and “no shortage of interest from young ladies this season.”

The first episode title and lines of season 3 have dropped

Episode 301, titled Out of the Shadows, was written by Bridgerton new showrunner Jess Brownell, and begins with the following juicy, yet vague Lady Whistledown dispatch:

We’ve been apart for far too long. At last, London’s smart set has made its return, and so too has this author. As the season begins, the question on everyone’s mind, of course, is, which newly minted debutante will shine the brightest. The crop this year proves to be rather dazzling indeed. Unfortunately, not every young lady can attract the light.

You can watch the full feature here:

This article was originally published on May 17, 2022