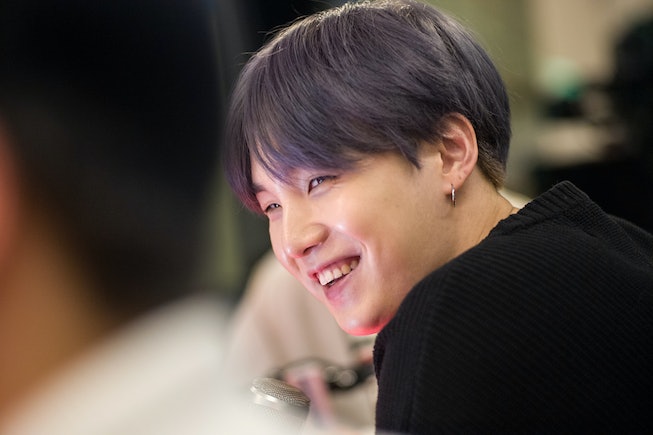 BTS is taking over the pop world — and one member says he’s determined to ride the wave for as long as possible. In a recent interview with Vogue Korea, BTS member Suga shared his long-term musical aspirations. “I think I’ll be in BTS until I die,” he said, without elaborating further, according to Soompi’s translations. “I just like BTS.”

Why make it more complicated than that? Suga has been producing and writing hits for BTS, and it’s clearly been working for him. He also shared that he wouldn’t consider writing or producing for any other K-pop group, even behind the scenes. “I’m often asked how I’d like to try producing [a group],” he said. “But I don’t think I’d be able to. I don’t have that much responsibility to be responsible for someone else.”

BTS was recently nominated for a Grammy for Best Pop Duo/Group Performance, alongside Tony Bennett & Lady Gaga, Justin Bieber & benny blanco, Coldplay, and Doja Cat ft. SZA. But if their sweep at the American Music Awards — where they won every category for which they were nominated: Favorite Pop Duo or Group, Favorite Pop Song for “Butter” and Artist of the Year — give any indication, they’re probably going to take home the prize.

“I have a humble version and a confident version so which one should I do? Honestly, I don’t have high expectations,” he said of the Grammy nomination, before eventually adding, “But I do think we’ll receive it!”

Amidst this landfall success, the group recently announced they’re going on hiatus — because breaks, as it turns out, are essential for creativity! In early December, they tweeted: "We would like to inform you that BTS is planning to take a second official extended period of rest since their first in 2019, after they complete their official scheduled events of ‘BTS PERMISSION TO DANCE ON STAGE — LA’ and the ‘2021 Jingle Ball Tour,'" the statement from management group BIGHIT MUSIC reads.

The break is intended to allow the group a have a chance to get "re-inspired and recharged with creative energy." They also teased a new album and a concert in Seoul. While we eagerly await a BTS appearance at the Grammys, you can check out the photos from BTS' Permission To Dance On Stage, where NYLON spoke to the ARMY about why they love BTS. (Though nobody probably loves BTS as much as Suga.)