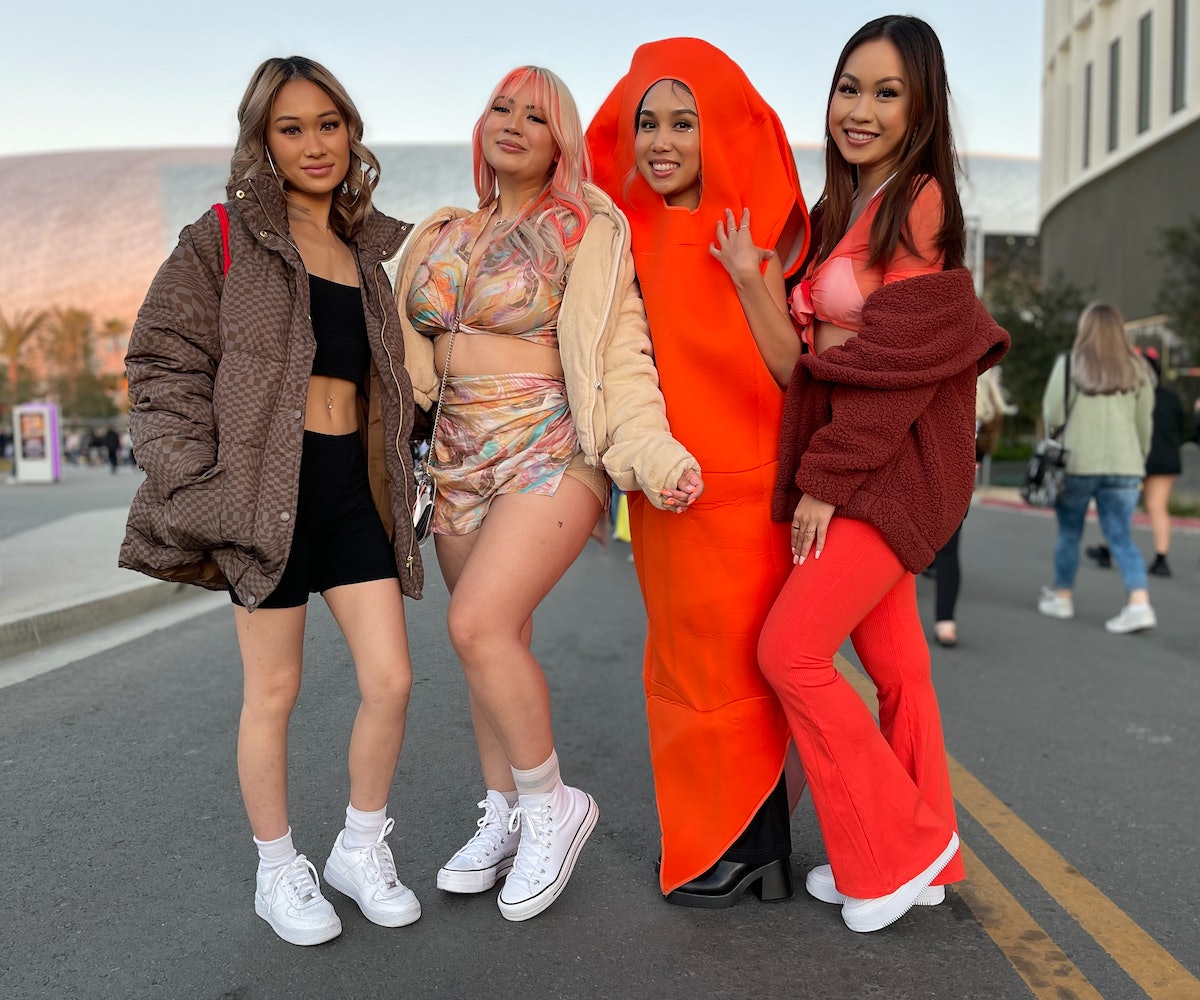 On Thanksgiving weekend 2021, the BTS ARMY couldn't have been more grateful or excited to see the global pop sensations live in concert for the first time since 2019’s “Love Yourself: Speak Yourself” world tour. Sunday night, Nov. 29, marked the second of four sold-out BTS shows at SoFi Stadium in Inglewood, California, where the beloved K-pop 7-piece finally brought Permission To Dance On Stage to the stage, after the pandemic forced them to cancel their Map of the Soul world tour last year. Though the revered boy band wasn’t scheduled to hit the stage until the early evening, hundreds of BTS fans were already filling the massive grounds of the Los Angeles stadium, buying official merchandise, by noon.

Ardent ARMY from far and wide began flying into Los Angeles from as early as Wednesday, even trending #ArmysinLA and #BTSArmy on Twitter as they posted photos from airports and airplanes to catch the only scheduled BTS live performances over the last two years. But the BTS jubilance extends beyond just the show. On Tuesday, the group was nominated for a Grammy in “Best Pop/Duo Group Performance” for their 2021 single “Butter,” making it their second nomination following last year’s nomination in the same category for “Dynamite,” which they performed on the high profile music awards show in March.

Outside Sofi Stadium, NYLON caught up with ARMY — many of whom were carrying their “ARMY bombs” (light sticks) and wearing purple (symbolizing love and trust) and orange (the color of “Permission To Dance On Stage”) — to talk about their passion for the beloved boy group whose devoted following loves its music as much as its message.

Akiya Roy, 23, from Virginia Beach, Virginia: “This is my first concert ever. I really love the boys, so I really wanted to see them and I'd been wanting to see them for a while. I had tickets for the last tour before it got canceled.”Pamela Chelin
Tisha Petersen, 44, from Meridien, Idaho: “I came in with my daughter and friend and we’ve been hanging out in LA and running into ARMY everywhere and it’s been the best vibes. I love Jimin. I love his passion when he dances and the way that he’s so sweet, too. I watch all the shows about them and I feel like I kind of got to know him. He’s very talented and his voice is beautiful and he’s so cute.”Pamela Chelin
Christine Alcala, 56, from Riverside, California: “I’m a fan because my daughter made me a fan. I love their music and positivity and they inspire people to be good. I’m excited to hear their music and just dance and sing along.” Antoinette Alcala, 37, from Riverside, California: “I just love BTS. I’ve been a fan since 2016. I love the message to love yourself and the positivity in the music and they make all their fans feel so loved.”Pamela Chelin
Timothy Nguyen, 23, from Moreno Valley, California: “This is my fifth time seeing BTS. I got the tickets last night as a surprise from my wife. They bring so many different messages that actually help the world. They always try their hardest in every single performance and if there’s a slight little mistake you can see that they’re very upset about it which is pretty sad.”Pamela Chelin