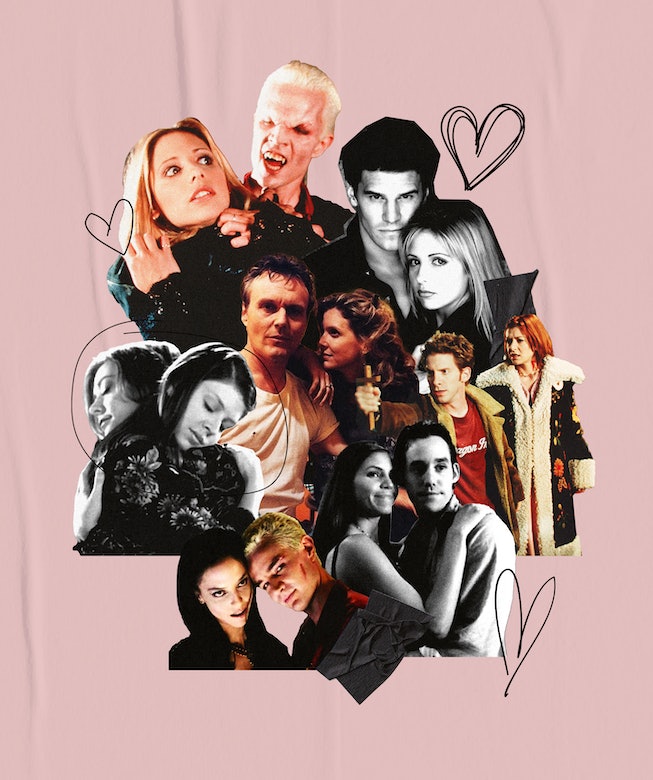 In the epic saga of Buffy the Vampire Slayer and Angel, love is always a battlefield. Nothing triggers an apocalypse like losing your soulmate, or your virginity. The writers of the Buffyverse never gave viewers the happy endings they so desperately desired for their favorite couples, honoring the core tenet of both series: Life rarely goes the way you want it to. No Slayer, witch, or vampire made it out of the Hellmouth with their hearts unbroken, and we're the better for it.

Across the lines of human and demon, good and evil, Sunnydale’s lovers found liminal solace in one another, and had the kind of sex that literally brought down buildings. Some love affairs lasted centuries, others were quickies inspired by love spells gone awry, and a chosen few would change television history forever. Willow & Tara, Buffy & Angel, Giles & Jenny Calendar: The courtships make for the best comfort food, and the downfalls, ever-heart breaking, trigger tears with every rewatch. Though we couldn’t cover every coupling in the Buffyverse — Spike and Harmony deserve a separate article, frankly — we rank the most enduring and iconic affairs from the combined twelve seasons. A word of advice for the local Hellmouth romantic? Don't get too attached.

This was Buffy’s last attempt at a life as a normal girl. Nice try. Riley stood at the gate of Buffy’s transition from blurry teen to individuated adult, like an albatross from the last millennium, when Buffy still believed that being the Slayer was an inconvenience, and not destiny. But as Buffy fully answers her calling, and readies herself for her greatest trials, the lure of conventional love slips away, and Riley has no place in town. To become the greatest Slayer of them all, she’d have to face her nature, in the dark, and she’d need a lover who could handle her power. And he needed to wear a lot more leather.

We should be celebrating Giles’ love for the dearly departed Jenny Calendar, but admit it: you were really rooting for these two. Sure, they only shared one night together, under the false auspices of Ethan Rayne’s chaos magic, but they looked damn good doing it. We all knew that Giles would be like “a stevedore during sex,” as Joyce put it. After a divorce, a deadbeat Slayer daughter, and a broken engagement to an evil John Ritter android, doesn’t a working mom deserve a good time?

Like Buffy and Spike, this one wasn’t necessarily built for the long run, but it was hot while it lasted. After being abandoned and left for dead, Wesley is a shell of his old chipper self, and he finds passion, kink and pleasure in the dark with Wolfram & Hart’s stone-cold HBIC, Lilah. After three seasons of corporate malice, Lilah gets to let her hair down, and the Buffyverse is treated to a love far outside the realms of standard propriety. Inevitably, Wesley would return to his pitiful pining for Fred. But after Lilah rocks your world, can you really ever go back?

While Buffy fought to the death with the love of her life, these two were making out in the janitor’s closet. Not every love story is forever, and, on a show with apocalyptic high stakes in every episode, it’s often a pleasure to indulge in pure hormonal rapture. Cordelia treated Xander like a dog, until she found herself smitten — and then it was too late to escape with a heart intact. By Season Three’s heartbreaking prom night, they’d be split up, but they’d both have proven that they could and would stick up for the ones they cared about, even if it wasn’t meant to be. Before they met their real soulmates, these two had a lot of growing up to do. Might as well do it before the school blows up.

A first love from a more innocent period in Sunnydale’s history. Oz could never survive the dark years to come, nor would we want him to impede Willow’s awakening to wicca, queerness, and Tara. But in the sweet period from high school to university, Oz gave Willow a safe and lovely launching point, and a chance to grow beyond her wallflower crush on Xander. The parting was hard, but, as they go in Sunnydale, it was at least complete. “I feel like some part of me will always be waiting for you,” Willow says, at their last goodbye. “Because you're with me, you know?”

The usually ice-cold Gunn melted for Fred upon first sight, until he realized that he’d fallen for his own manic pixie fantasy. But Fred is no airhead ingenue; she’s survived through traumas he can’t imagine, and doesn’t need to be rescued, especially if he’s in the way of her own revenge. For a time, this couple was the sole bright spot in Angel’s saga of Shakespearan downfalls, but like everyone else in Los Angeles, they’d have to face reality, and come to a hard sobriety.

For a sheer abundance of joy, nobody can top this couple. Over five seasons, Emma Caulfield made Anya into a layered, surprising character, sparkling with fire and joie de vivre. And for all the spectacle of their courtship and romance, as immortalized in “Once More With Feeling,” the questions raised by their breakup would rock Anya to her core. Even after a thousand years, how well can you really know yourself? What do you lose when you give your heart to someone? In loving and losing such a powerhouse, Xander evolved far beyond his initial role as comic relief. Anya didn’t deserve such a brutal ending, and her fans will be demanding justice for years to come. And why shouldn’t we? She made us believe that we could change, and be loved for it.

Long before your quarantine pod started getting freaky, this foursome was tearing the old world apart! Though the two core couples — Darla and Angel, Drusilla and Spike — would endure epoch-spanning romances, it’s when the group mixes it up that things get really interesting. Just how did Darla, the arch-sire of this foursome, share in her brood? And how often did the girls sit back and watch as Spike and Angel release their pent up animosity on each other? Contrary to Lestat & Louis in Interview with the Vampire, and to the dreary old farts of True Blood, eternal love doesn’t have to be a drag.

It’s not just that their union was historic — the first depiction of lesbians in bed on broadcast television — it’s that it felt real. From the moment Willow and Tara shared hands in “Hush,” we knew this was a different kind of connection, one which Buffy’s writers would have to thread subtly and creatively to get past homophobic network censorship. The result is something that feels uniquely sweet, kind and empathically grounded. Nothing this pure could last long in Sunnydale, but this time, the heartbreak had real consequences, leading to a Dark Willow we were all rooting for. “The only thing Willow was ever good for,” the newly-crowned villain says to Buffy, “...were those moments...just moments...where Tara would look at me and I was wonderful. And that will never happen again.” If she’s going to end the world over Tara, can you really blame her?

Don’t act like this didn’t kill you. David Boreanaz may have gone on to a long and prolific TV career, but for a generation of viewers, he’ll always be the one with the angelic face, wearing a white tank and a blazer, sneaking through Buffy’s window. This was, and is, true love, and, when it culminated in a betrayal nobody saw coming, nothing would ever be the same — for the Slayer, her universe, and the history of storytelling on TV. “A vampire in love with the Slayer,” Giles observes. “It’s rather poetic.” This is a poem left unfinished, a possibility of a love completed after the world has been saved once and for all. But for the scope of these shows, it’s still first love, and it’s enough to change you forever.

What Buffy and Angel had was definitive, but marked forever in the passion of adolescence. But this slow-burn, ever-simmering union was based on the growth of two adults. As Cordelia came into a place of responsibility, strength, and divine power, she found herself supported by a fellow champion. Though they never consummated their love, and it all ended in one of Joss Whedon’s traditional Oedipal freakshows, Angel and Cordelia demonstrated a romance of grace; two people seeing each other while waiting in the wings for their lives to start. “Were we in love?” Angel asks. “We were,” Cordelia responds. Angel and Cordelia never get what they want, but that doesn’t mean it wasn’t real.

Stacey Abrams knows what’s up. What Buffy and Spike share, meeting in a dark space of doom and depression, is not aspirational, shippable, or necessarily acceptable. Both characters abuse the other — verbally, emotionally, and physically. But in the embrace of the dark side, Buffy finds herself, and finally crawls out of the grave. Spike, meanwhile, reconciling love without a soul, blows the show’s moral boundaries apart. The chemistry is smoking hot, with sex scenes that could never be aired on the WB. Call it problematic, but it’s likely we’ll be debating this one for years, and that few depictions of a heroine’s desire will ever allow for this much complexity.