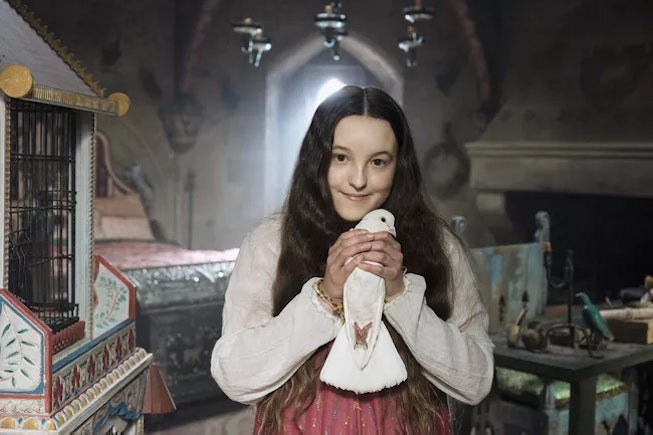 Lena Dunham has always made TV shows and films about smart, difficult women. They’ve usually been women in this century, but now, she’s taking it back all the way to the 1290s. Dunham’s latest film Catherine, Called Birdy is a Medieval coming of age story about a rambunctious 14-year-old who wards off potential male suitors. It’s based off a 1994 YA novel of the same title that Dunham says she’s been obsessed with since she was a kid.

A far cry from the 2012 Williamsburg setting of Dunham’s Girls, Catherine, Called Birdy takes place in 1290 in a Medieval English village and follows Lady Catherine (known as Birdy), the youngest child of a greedy Lord who wants to marry her off for money and land, but Birdy is determined to scare off any suitor. “Her imagination, defiance, and deep belief in her own right to independence put her on a collision course with her parents,” the logline reads. “When the vilest suitor of all arrives, they are presented with the ultimate test of love for their daughter.” It stars Bella Ramsey, best known for Game of Thrones, Dr. Who’s Billie Piper, Conversations With Friends hottie Joe Alwyn, and Andrew Scott of Fleabag hot priest fame.

Dunham has been talking about adapting the book since 2014.

“[She] gets her period and her father basically says, ‘Well, it’s time for you to get married,’ and she’s like, ‘Uh, no.’ But it’s hyper realistic and really pretty and it’s full of incest and beatings, but it’s a child’s story. I’ve been obsessed with it since I was a kid,” Dunham said at a New Yorker festival nearly eight years ago.

“I wanted to highlight this girl who was living in the wrong time,” Dunham recently told Teen Vogue. “If she was living in 2022, she would be a pretty classic tomboy or able to explore the gender binary, she’d be able to play all the sports she wanted. All of her dreams, which in 1290 are to go to a hanging and run around without a skirt on, would be achievable. But there are still as we know, huge challenges to being a woman in this day and age, and a teenage girl.”

Catherine Called Birdy will premiere in theaters on September 23 before being released on Amazon Prime on October 7. In the meantime, you can watch the trailer here:

This article was originally published on May 19, 2022