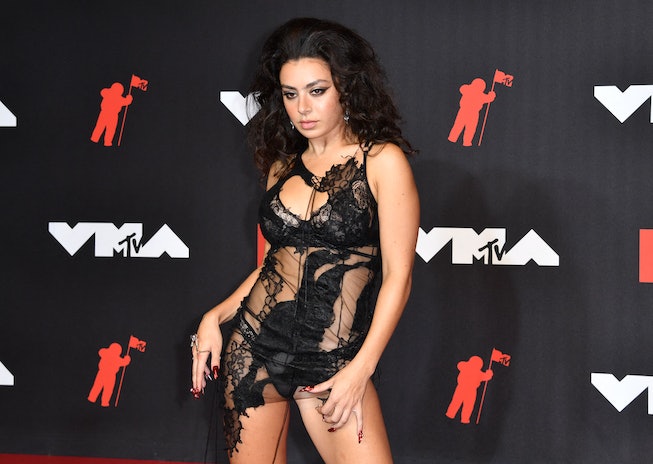 For some, lockdown was intensely productive, while for others we mostly just tried to wait it out with as much mental sanity intact as possible. For Charli XCX, it was a combination of both. A few days after the singer released her glitchy pop lockdown album How I’m Feeling Now — the album whose cover art inspired thousands of Hanes cotton tank and underwear purchases — she announced Alone Together, a feature-length documentary capturing the making of the album from Charli’s house, along with how she was feeling at different points during the lockdown.

We’ll get to see a raw behind the scenes look at her life and work during that period, from choosing lyrics and album art to her living with her boyfriend Huck Kwong (and eventually producers) and dealing with all the emotions that came with lockdown. Charli took a maximalist approach to filming; the doc was edited down from more than 5000 clips from different cameras and formats. Alone Together makes the feature-length directorial debut for the duo Bradley & Pablo, who directed Charli and Troye Sivan’s “2099” video.

Initially, the film was set to be called Six Feet Apart, (too close to Six Feet Under, IMO) but the words Alone Together, which comes from an early slogan from ill-fated Governor Cuomo to get Americans to stay inside, is like a time capsule to March 2020.

“It felt only natural to document myself making this album,” Charli told Variety last year when she announced the film. “I don’t think I’ve ever made music in such a unique situation: being so logistically far apart from my collaborators, but going through exactly the same thing, writing songs about my relationship with my boyfriend sitting in the next room, and being so connected to my fans in such an intense and creative way, it felt quite overwhelming and heartwarming all at the same time. So I wanted to film it all.” She added: “Why not add to the pressure of making an extremely personal album within a five-week timeline by putting a load of cameras in my face and zooming in on my personality and insecurities too??! You know???”

But it’s that personality and those insecurities that fans want. Of course, there’s no shortage of music documentaries about current pop stars — looking at you Gaga: Five Foot Two, Miss Americana and Billie Eilish: The World’s A Little Blurry — but this one is made by Charli herself, capturing an intimacy and level of access that a crew could never. It’s more art project than PR project.

Alone Together premiered virtually as the headliner at SXSW last year, and will finally be available for wider public consumption in theaters starting January 28. In the meantime, listen to How I’m Feeling Now again, and read NYLON’s review of Alone Together.