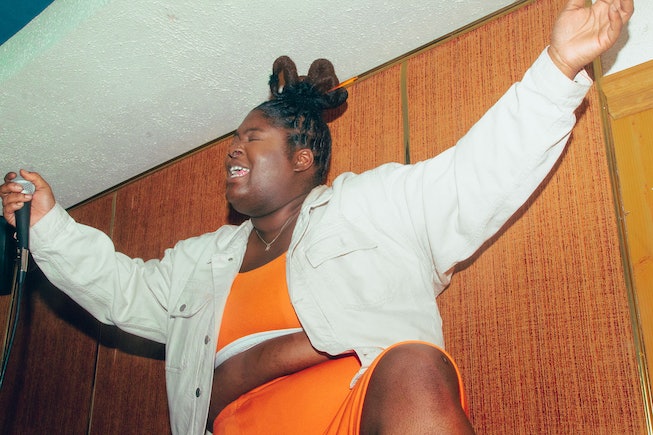 On the first track of Chika’s EP, Industry Games, she raps: "Call it intuition, but I’m about to change the world, it’s been my only mission,” closing the song with, “I hope this music make you think.” Over the last four years, the 24-year-old rapper has done exactly that: creating music that makes an audience and an industry open their mind.

Chika’s rise to fame was meteoric. She went viral in 2017 where she remade Ed Sheeran’s “Shape of You” into a Pride anthem. In 2018, she made a freestyle addressed to Kanye West over “Jesus Walks,” and by 2021, was nominated for a Grammy for Best New Artist and won a GLAAD award for her EP Industry Games. Fame like that is enough to give anyone whiplash, and Chika has been vocal about the effect the music industry has had on her mental health, even tweeting in April that she was retiring from the industry. She’s since come out of her brief retirement, but has taken breaks from social media to focus on mental health. Industry Games also takes the music industry to task, and Chika’s been vocal about the mental toll the industry has had on her.

Chika was set to headline Calvin Klein’s Moments of Pride event in New York City last week, hosted by Bowen Yang, and featuring performances from Haus of Tisci and NYC-based art collective Papi Juice; unfortunately, the event was cancelled due to inclement weather, but event performers ended up gathering instead at the Lower East Side haunt The Flower Shop, where Chika, Haus of Tisci, and Kandy Muse gave impromptu performances. Below, NYLON spoke with Chika over the phone about why it’s important to celebrate Pride beyond the month of June, how the music industry can better support artists’ mental health, and the number one way the industry needs to change.

You were part of Calvin Klein’s 2019 viral “Speak My Truth” campaign. Tell me about your involvement with the brand and how you first got connected with them?

Calvin was one of the first, if not the first brand, to hit me up for any kind of sponsorship or endorsement. It was significant to me because I didn't have any music out at the time. I was in the 2019 Speak My Truth campaign with a lot of artists who did have music and were pretty notable people and people I looked up to. It was cool, it was Kevin Abstract and Billie Eilish and people I think are super dope and change makers in their way, and here I am, little old me, no music yet and they still saw the potential. So when we did the campaign and it ended up yielding the results it did and the response it did, it was cool to me.

I’m the type of person who sticks with the people who show support early on. When I make connections with people, it’s family at a certain point and with Calvin, it’s like that. If they tap me for something and I'm able to make it happen, it’s giving back to the people who saw the value and potential in me before any commercial success. They just saw a kid on Instagram and put me amongst this group of dope individuals who had already established themselves and gave me that opportunity, so doing this is full circle.

Why is it important to celebrate Pride beyond June?

Because, LGBTQ+, all of us exist far past the month of June and beyond the month of June. I think that pride is so much more than a celebration, it's more of a declaration: “We’re not going to apologize for taking us space as everyone else does.” [Celebrating] past June is an important thing because you're holding space for humanity and other’s humanity, even when it’s not the designated month to do so, when it’s not the corporate “slap a rainbow on everything,” when you’re still able to support the community outside of what is expected or the norm or designated time, that’s when it matters the most. Because the violence and marginalization doesn’t stop once July hits. It’s always a thing. It’s ever-changing and ever-constant and we need to continue to be there for each other and to show up for each other not just in June.

What are some ways brands can show their allyship throughout the year and not just during Pride season?

I feel like it comes with mostly stopping the performative part of Pride anyway. There’s a certain aspect of corporate Pride that is all about performing the act of acceptance, which is such a weird concept in and of itself because you shouldn’t have to practice accepting something. None of us have asked to be accepted. That’s a human thing to do for one another. When you see brands trying to integrate Pride into their résumé, they have to do it in a way that goes beyond just saying, “We know y'all exist and because of that were going to make our things rainbow and are going to make money off the fact that you all exist and will buy things that represent you in a way.” They have to show up in ways that don’t benefit them for it to really matter. Donate to causes. Stop donating to causes that hate us.

“You have to show up in a way that means something and will be long-lasting. Selling me a shirt that shows I exist is not that.”

You have to do things that are far beyond making merch or including us in campaigns that are meant to show inclusivity that will ultimately just benefit your brand and make money. You have to show up in ways that literally might not ever translate, not like. “Oh look, we have partnered with the gays and the trans people and nonbinary people.” It’s not a thing where you have to perform it. You have to show up in a way that means something and will be long-lasting. Selling me a shirt that shows I exist is not that.

You’ve been vocal about mental health. How can the industry better support artists when it comes to mental health?

They need to listen to artists when artists are telling them about the workload, how tough it can be, what they need, what they do not like, and the boundaries and limits of what people have. Artists are not entities to be milked until they have whatever content they need. If you want to support artists’ mental health, you need to hear them when they say they aren't doing good and hold space for them. Not often do artists get the space to hold space for themselves. We’re looked as as selfish or lazy, but a lot of mental health issues translate differently or read differently to those who don’t understand what it is or what it feels like. I mean, if you can’t understand when someone is trying to communicate — that’s the only request we can truly make, because there’s no overnight change that’s gonna happen.

“Artists are not entities to be milked until they have whatever content they need. If you want to support artists’ mental health, you need to hear them when they say they aren't doing good and hold space for them.”

On Industry Games, you really take the music industry to task. What are some of the ways the industry needs to change?

There’s so many. I feel like ultimately everything boils down to we need to return to what music has always been. It’s been a form of expression, and yes, there's a way for that to be marketable and monetizable and lucrative. But if our main goal as musicians is to compete commercially for the opportunity to have space, to have a platform, that means we’re putting more value on the money we make than the art we create and that’s the industry’s biggest sickness right now: It’s greed. I could go into a list of things that need to happen, but at the root of it, it is always going to be and always has been greed. There are easier ways to make music and make money and get famous quickly because of virality. The culture surrounding creating art in that way has been corrupted and it's not necessarily fun, but can be if you create a safe space to make music and be within your fan group, but the main way the industry has to get back to itself is by cutting the BS when it comes to this greed.