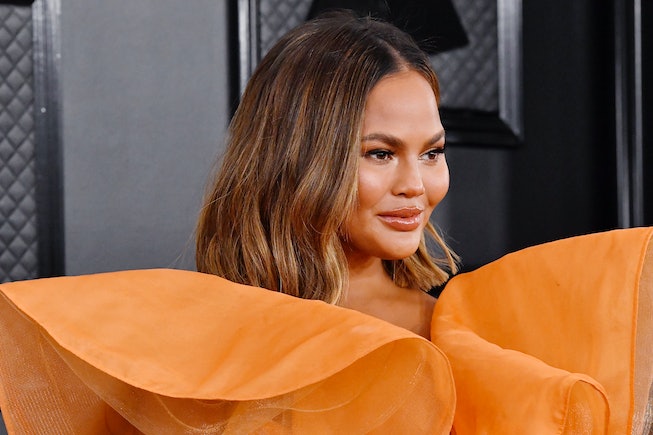 Once hailed as the clapback queen of Twitter, Chrissy Teigen is now pretty much only using her feed to apologize to people she’s bullied — a list that feels like is rising as fast as summer short inseams.

In June, the model and cookbook author shared a Medium post apologizing for bullying people, including Courtney Stodden, the reality TV personality who, at age 16, married 51-year-old actor Doug Hutchison in 2011, in a relationship Stodden has since described as abusive.

Then, on June 14, Project Runway’s Michael Costello said in an Instagram post that he is still traumatized and has thoughts of suicide after Teigen allegedly bullied him on Instagram in 2014. Teigen has not yet commented on those allegations.

Since celebrity bullying scandals and subsequent apologies are harder to track than moon cycles, below is a breakdown of the current bullying accusations against Teigen.

Does any of this have to do with Teigen quitting Twitter for a few months?

Kind of. On March 24, to much fanfare, Teigen announced she was quitting Twitter because it serves her “negatively.”

In response, according to TMZ, Stodden called Teigen a hypocrite in an Instagram video. That video is no long available, but according to Buzzfeed, the video said: "It was just so hypocritical of her ... I think, for me, because I experienced so much harassment and bullying from her when I was just 16 years old, just 17 years old, just 18 years old, at a time when I needed help. Like, I was being abused."

Wait, so Teigen bullied a 16-year-old?

TMZ posted screenshots of Teigen’s alleged tweets to Stodden, which included: “i hate you,” “go. to sleep. forever.,” and “my Friday fantasy: you. dirt nap. mmmmmm baby.”

And in an interview with The Daily Beast in May, Stodden said of Teigen:

She wouldn’t just publicly tweet about wanting me to take “a dirt nap” but would privately DM me and tell me to kill myself. Things like, “I can’t wait for you to die.”

Did Teigen apologize? How did that go?

On May 12, Teigen apologized to Stodden in a Twitter thread, writing:

“I’m mortified and sad at who I used to be. I was an insecure, attention seeking troll. I am ashamed and completely embarrassed at my behavior but that is nothing compared to how I made Courtney feel.”

I have tried to connect with Courtney privately but since I publicly fueled all this, I want to also publicly apologize. I’m so sorry, Courtney. I hope you can heal now knowing how deeply sorry I am. And I am so sorry I let you guys down. I will forever work on being better than I was 10 years ago, 1 year ago, 6 months ago.

Stodden, who uses they/them pronouns, wrote that they accepted the apology on Instagram and included a screenshot that Teigen had blocked them on Twitter.

“I accept her apology and forgive her. But the truth remains the same, I have never heard from her or her camp in private,” Stodden wrote on Instagram on May 12. “In fact, she blocked me on Twitter. All of me wants to believe this is a sincere apology, but it feels like a public attempt to save her partnerships with Target and other brands who are realizing her ‘wokeness’ is a broken record.”

And then Teigen apologized again?

On June 14, she apologized again for bullying Stodden and others in a lengthy Medium post, writing:

There is simply no excuse for my past horrible tweets. My targets didn’t deserve them. No one does. Many of them needed empathy, kindness, understanding and support, not my meanness masquerading as a kind of casual, edgy humor.

I was a troll, full stop. And I am so sorry.

Now, confronted with some of the things that I said, I cringe to my core. I’ll honestly get sharp, stabbing pains in my body, randomly remembering my asshole past, and I deserve it. Words have consequences and there are real people behind the Twitter handles I went after. I wasn’t just attacking some random avatar, but hurting young women — some who were still girls — who had feelings. How could I not stop and think of that? Why did I think there was some invisible psycho-celebrity formula that prevents anyone with more followers from experiencing pain? How did I not realize my words were cruel? What gave me the right to say these things?

Who else did Teigen bully?

Last month, Project Runway contestant Michael Costello posted on Instagram that he had suicidal thoughts after Teigen bullied him. He says that in 2014, Teigen posted on his Instagram accusing him of being racist, after Teigen saw an allegedly Photoshopped comment from Costello that Instagram has since taken down. Costello says that when he reached out to Teigen asking her to take the comment down, she said Costello’s career was over and that “racist people like you deserve to suffer and die.”

According to Page Six, Teigen also bullied Lindsay Lohan in 2011, allegedly tweeting in January 201: “Lindsay adds a few more slits to her wrists when she sees emma stone.”

Jess Simms, a freelance writer, tweeted that they were surprised nobody has looked into Costello’s story, and posted a series of tweets explaining some background on the alleged 2014 incident he referred to.

According to the tweets, apparently in 2014, one of Costello’s employees purchased a dress from Maxine James, a Black designer, and then posted a photo of a dress on Instagram without crediting her. Costello’s sister and creative partner then accused the designer of basing the dress off an early Costello design. Costello’s followers then apparently started commenting on the designer’s Instagram criticizing him, to which Costello appears to have responded with a racial slur.

So far, Teigen has reportedly stepped down from her voiceover role in season 2 of the Mindy Kaling-produced comedy Never Have I Ever. And in May, Teigen’s “Cravings” product line disappeared from the Macy’s website.

According to the Medium post, Teigen is making the apology rounds. She wrote:

I’ve apologized publicly to one person, but there are others — and more than just a few — who I need to say I’m sorry to. I’m in the process of privately reaching out to the people I insulted. It’s like my own version of that show My Name is Earl!

Has Chrissy said anything since this all went down? Is she still posting?

Teigen has been relatively silent (for her standards) since the scandals came to light, save for writing a Medium post titled “Hi again” on June 14. One month later on July 14, Teigen took to Instagram to share that she feels like “utter sh*t” and essentially misses being extremely online in a lengthy caption on a photo of her sitting on a couch wearing ripped jeans. The caption reads:

“Iiiii don’t really know what to say here...just feels so weird to pretend nothing happened in this online world but feel like utter shit in real life. Going outside sucks and doesn’t feel right, being at home alone with my mind makes my depressed head race. But I do know that however I’m handling this now isn’t the right answer. I feel lost and need to find my place again,I need to snap out of this, I desperately wanna communicate with you guys instead of pretending everything is okay.”

“Cancel club is a fascinating thing and I have learned a whollllle lot. Only a few understand it and it’s impossible to know til you’re in it. And it’s hard to talk about it in that sense because obviously you sound whiney when you’ve clearly done something wrong. It just sucks. There is no winning. But there never is here anyhow. All I know is I love you guys, I miss you guys, and I just needed an honest moment with you because I’m just...tired of being sick with myself all day.”