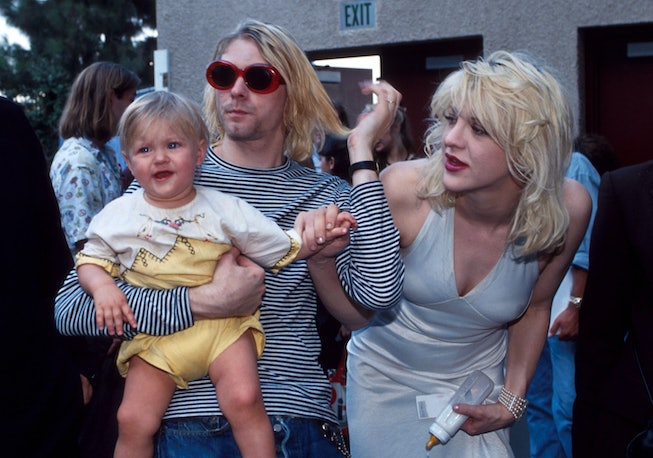 Courtney Love Cobain may not be happy over Olivia Rodrigo paying homage to Hole, and she might be a little wishy washy about a reunion, but she is absolutely obsessed with the use of the Nirvana song “Rape Me” in the new season of the HBO hit satire Succession, saying her late husband and Nirvana frontman Kurt Cobain be “proud.”

Love only had good things to say about how the song was used the show, and tweeted her support. “succession.. I’ve never felt so good about approving a usage of a song of Kurt’s,” she wrote. “You understood this: him, it’s beautiful. I’m sure he’s proud.” She even hinted at some untold lore behind the song, writing, “Ask me who it’s about one day. I might even tell you,” adding a flame and teapot emoji for good measure.

She echoed her feelings on her Instagram Story, writing, “I was in the room watching (agog) as this song was written in about an hour, and I’ve never been so proud of approving one of Kurt’s songs, this cue in @succession is as if they truly understood kc what he was screaming his heart out … without specifics … about. I’m sure wherever he is he’s proud of this.”But back up for a minute: Love might even tell us who the song is about? That’s a new level of terrifying and juicy industry gossip, even for her!

As Cobain’s window, Love has the right to approve his songs for different uses (and apparently the right to tell us who all of them are about.) The song, released in 1993 on on In Utuero was Cobain’s attempt at an anti-rape anthem and was the last single he released before dying from a self-inflicted gunshot wound to the head in 1994.

In Succession, Siobhan “Shiv” Roy, the only female sibling and newly promoted president of the company, is speaking at a town hall trying to smooth over sexual assault allegations and extreme misconduct that the media conglomerate Waystar Royco (owned by her father) has covered up for decades, when Nirvana’s “Rape Me” starts blaring in the room to sabotage the event, presumably by her brother-turned-nemesis, Kendall. We love the idea of Courtney freaking out over a Succession musical moment as much as the rest of us — as well as a powerful Nirvana moment in a show that’s so...un-Nirvana.