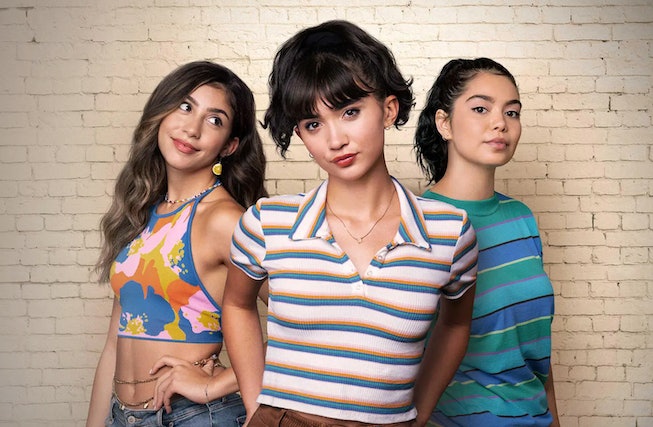 I’ve recently been rewatching classic rom-coms (and by watching I mean having on as ambient noise while I play on my phone). Uptown Girls, Maid In Manhattan, and 10 Things I Hate About You have all been in my Recently Watched list, but lately I’ve been hungry for something more contemporary, something that incorporates texting, or the perils of seeing if someone has viewed your Instagram story, you know?

Luckily, a cute new rom-com is coming to Hulu later this month. Crush is a high school queer love story that follows Rowan Blanchard as Paige, an artist obsessed with getting into CalArts who’s forced to join her school’s track team. She uses it as an opportunity to pursue the girl she’s long had a crush on, but instead finds herself falling for an unexpected teammate — learning about love, life and art along the way. To come of age!

Based on the trailer, the film has all the classic rom-com elements: a quirky, lovesick protagonist with a dorky friend, people in their 20s playing stylish 16-year-olds, flirty hallway banter, longing looks across quads, and Big Life Lessons. The trailer promises a very 2022 universe where Paige’s sex-positive mom tells her not to eat edibles before school, where parties are donned in Phillips Hue lights, where a classmate is saging her locker, and where Paige’s crush is wearing a body chain. In high school? Inspiring!

One such hallway banter moments includes Paige’s crush asking her if she’s going to “come out today,” to which Paige replies, “I’ve actually been out for a really long time, I’m extremely gay.” Her crush responds, “I was actually talking about track tryouts.” Ugh, to be 17 again. Everything is so embarrassing and inconsequential.

Crush premieres on Hulu on April 29. In the meantime, watch the trailer, below.

NEXT UP
Culture
Phoebe Dynevor Will Not Return for Bridgerton Season 3
Culture
Succession Season 4 Trailer Explodes With Family Drama
Culture
The Madonna Biopic Is Being Scrapped
Culture
Kaia Gerber Won’t Stop Until She’s Cast As Patti Smith In A Biopic
Style + Culture, delivered straight to your inbox.