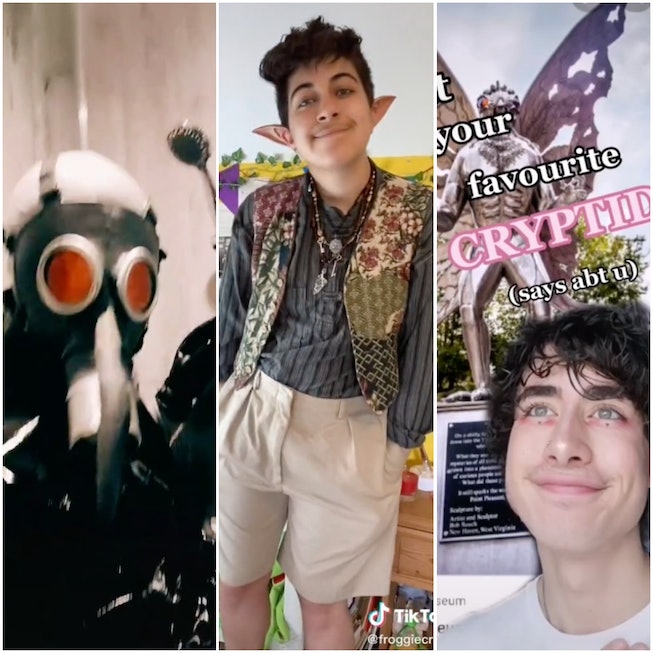 Cryptidcore has made its way to TikTok, where a growing number of users are talking about witches, burning incense, and everyone has a fatty crush on a fictional character named Mothman from West Virginian folklore.

Cryptidcore is an aesthetic adjacent to anime and 2014 Tumblr culture that could maybe bump elbows with astrology. The crew who is into it now are probably the same kids who constructed fairy houses out of tree branches, read King Arthur spinoffs, and were into palm reading pretty early on. According to WikiAesthetic, cryptidcore takes its inspiration from the fashion of the 1970s to the 1990s, a perplexingly long period that includes everything from peasant blouses to crushed velvet. On TikTok, cryptidcore fashion is generally expressed as elfin hats, vests, and long, twiney necklaces.

Cryptidcore is named, of course, for cryptids, mythical creatures like Bigfoot, Mothman and the Loch Ness monster. It’s a booming community: The hashtag #cryptidcore currently has 15.2 million views on TikTok. A good introduction to the vibe is this pseudo cryptidcore recruitment video featuring a girl in a Bo Peep dress with a parasol, showing images of celestial skies, firefly-laden forests, a close-up of a bug in a jar and, for some reason, a photo of traffic at sunset. The video, made by the user @cabin.noctis, a popular cryptidcore TikTok account, has 183,000 likes.

The account has an online community, which, according to its Tumblr, is an online community for people who like “dark Academia, trying to make up for your lost childhood by watching cartoons, collecting bones,” “Harry Potter but NOT transphobic and icky, MOTHMAN, or “any of the edgy fairy books,” among other things.

Another aspect of cryptidcore TikTok is a (sometimes sexual) reverence for Mothman, like the user @yourfriendcryptid, who pretends that her boyfriend is Mothman, or a slew of oddly soothing videos where people simply draw or paint Mothman to a song that is the “Y.M.C.A.” except it changes the lyrics from “young man,” to “Mothman.” The hashtag #mothman art has 4 million views, while #sexymothman has 1.5 million views.