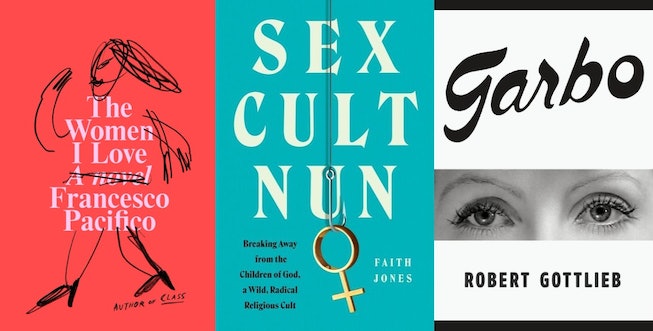 While December is scientifically the fastest month on record for everything else, it is a notoriously slow month for publishing, with this year’s predictable bestseller celebrity memoirs and coffee table books already released in time for Christmas shopping. (This year? A new novel from Big Little Lies author Liane Moriarty, an Anthony Bourdain oral history biography, and a Beatles coffee table book about the making of Let It Be, I’m predicting.) But don’t sleep on the books that are getting released this month — especially as most are being released in the first two weeks, which make the perfect of-the-moment gifts.

This month, get excited about The Ballerinas, a thriller novel that fills the Black Swan-shaped hole in your heart, and a collection of poems by Amanda Gorman who was still the highlight of the Inauguration. (Other than Gaga’s bulletproof dress. Also, remember how that was this year?) Also on the publishing horizon is a new biography about starlet Greta Garbo that goes into the public’s and paparazzi’s obsession with her long after she retired, and a novel set in “vivid, alcoholic Italy,” if you can’t get enough of House of Gucci. Read on for more December 2021 books to read this month.

Faith Jones wrote a memoir about leaving the Children of God, the notorious religious cult founded by her grandfather that’s famous for their staunch preparation for End Times and abusive sexual practices. At 23, she broke free and had to figure out how to live a “normal” life after such a wild upbringing, which she eventually pieces together.

A darkly funny, heartbreaking sports memoir about getting older, from the novelist Scarlett Thompson, who is pretty successful and well-adjusted until her entire life falls apart at age 41. She emotionally regresses into playing tennis, which she loved as a child and had abandoned, and an obsession with winning.

Call Us What We Carry by Amanda Gorman - Penguin Random House, December 7

It’s been more than a year since the inauguration, and America’s youngest-ever Inaugural poet’s debut poetry collection is still just as hyped. Which is big, because her books were so hyped that they debuted at no. 1 and 2 on Amazon months before they were even out. Gorman, who counts Obama and Oprah has fans, can expect a big check from holiday sales for this bad boy — and we support any living poet getting paid! Expect Big Themes like collective grief and reckoning.

The word icon gets thrown around a lot these days, but Greta Garbo was undoubtedly one of the original American icons of glamor. In a new biography, Robert Gottlieb looks at both her life starting as a peasant girl from Sweden who barely spoke English when she came to Hollywood at the age of 19, along with the culture that worshipped her. In a time when we’re reconsidering our treatment, scrutiny, and obsession of women celebs, it could be useful to revisit one of the original stars who had to spend too much time and money dodging paparazzi.

The Women I Love by Francesco Pacifico - Farrar, Straus and Giroux, December 7

Set in “vivid, alcoholic Italy,” which is an incredible descriptor of a scene in three words, writer and poet Marcello is trying to write a novel about the women in his life, from his former protegeé to his estranged gay sister. They defy all easy categorization so he ends up writing about — gasp! — their complexities in a novel about modern masculinity that questions the male gaze.

Give me a psychological thriller ballet novel any day, anywhere. Blame Black Swan but there’s something so tantalizing about the combo of the pristine nature of ballet mixed with the messy drama of a thriller; having to be so precise about anything would make anyone go a little nuts. The novel centers around Delphine, who 13 years ago, abandoned a prestigious spot at the Paris Opera Ballet with a dark secret that could ruin the lives of her fellow dancers. Now, she’s returned to the Paris Opera House as a choreographer but learns her secret can’t stay buried. Dun dun dun!

I’m usually wary of an Addiction Story, but this debut novel by Lisa Harding seems to have enough dry humor and self-effacement to make it more dynamic and complex than alcohol = bad, sober = good. It also has the praise of Three Women author Lisa Taddeo who famously explores the moral ambiguity of people dealing with big problems. The book follows Sonya, a washed-up performer whose glamorous life turned to alcoholism that she was forced to contend with in order to raise her son.