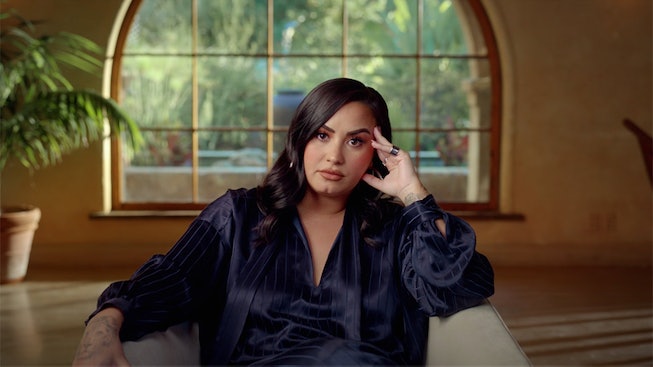 In her upcoming YouTube documentary series, Demi Lovato: Dancing With the Devil, the star reveals she was sexually assaulted, Variety reports. The four-part documentary series officially premieres on YouTube on March 23, but early press reports and reviews from the film’s SXSW premiere have started to come in.

A previous trailer for the series detailed some of what the project would touch upon, and along with exploring her recovery following an overdose, Lovato shares that she was sexually assaulted as a teenager.

The incident occurred when she was 15, Variety reports. As Lovato speaks of what happened, the documentary shows footage from Camp Rock and Sonny With A Chance, which possibly signal that it happened while she was an active member of the Disney Channel team.

Lovato explains that she had previously chosen not to talk about the assault, saying, “I really beat myself up for years — which is also why I had a really hard time coming to terms with the fact that it was a rape when it happened. We were hooking up but I said — hey, this is not going any farther, I’m a virgin, and I don’t want to lose it this way. And that didn’t matter to them, they did it anyways. And I internalized it and I told myself it was my fault because I still went in the room with him. I still hooked up with him.”

She later attempted to contact the person after what happened, saying, “I called that person back a month later and tried to make it right by being in control and all it did was make me feel worse.”

Lovato reports that she had to continue to see this person, and the situation was made worse because there was continued attention surrounding Disney Channel stars and those that had chosen to wear purity rings. “Women are typically more repressed than men, especially at 15 years old, and especially as a little child star role model who’s supposed to be perfect, who had a promise ring! So what — I’m supposed to come out to the public after saying I have a promise ring? Six months later, I’m supposed to say, well I had sex — even though it was rape! Some people aren’t going to see it that way,” she said.

She goes on to reveal that despite telling someone about what happened, her rapist “never got in trouble.” She says, “They never got taken out of the movie they were in. But I’ve just kept it quiet because I’ve always had something to say, and I’m tired of opening my mouth, so there’s the tea.”

Along with the documentary’s debut on March 23, Lovato announced that’s releasing a new album. Set for release on April 2, the album, Dancing With the Devil… The Art of Starting Over, coincides with her life story, Lovato said.

If you or someone you know has been sexually assaulted, you can call the National Sexual Assault Telephone Hotline at 800-656-HOPE (4673) or visit hotline.rainn.org.