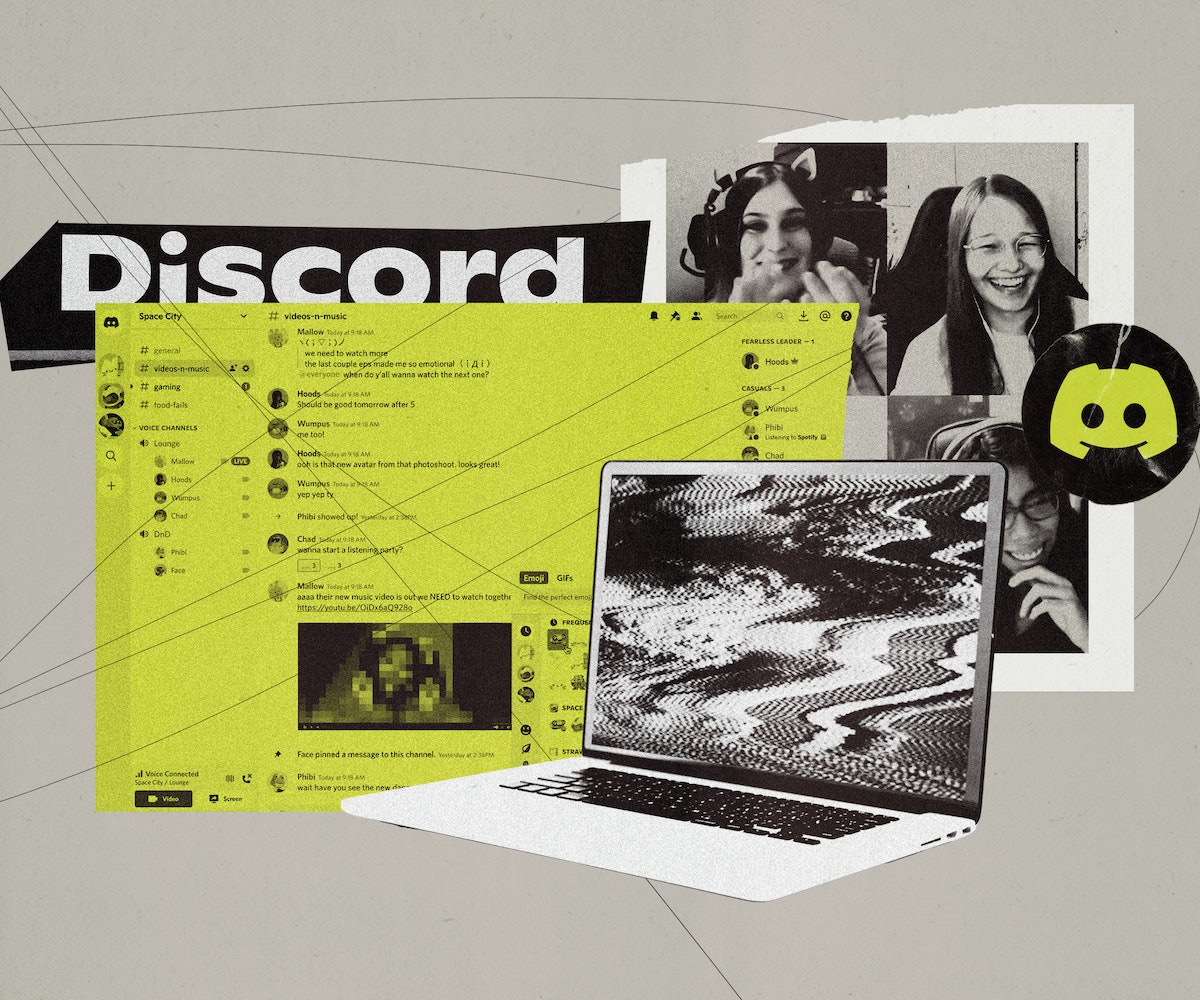 Kate Wolf has a pretty typical teenage existence — go to class, come home, log on. She spends the after-school hours alone in her bedroom, avoiding her family. “I don’t really like being home because my parents and I don’t have the best relationship. We don’t talk much,” Wolf tells me on the phone. The best part about her room is her portal, the computer where she can access people who really understand her. Wolf, who uses both she and they pronouns, is 16 years old and lives in Long Island. But on Discord, she’s represented by an ageless, serene Buddha cartoon, her persona fittingly named “WhoIsKateIdkHer.”

Wolf initially joined the messaging platform in 2017 to chat with friends but quickly began exploring servers and meeting new people. She participates in roughly 35 Discord servers for topics ranging from video games to the trans experience. Last February, she joined a server that combined everything she wanted to chat about. The server is billed for fans of the hyperpop duo 100 Gecs, but the community has built its own subculture that spans beyond their music. Members shift focus back to 100 Gecs when the band drops a new song or announces a tour, but mainly use the server to share the thoughts and images that fill their days. They discuss gaming, post pictures of their cats and outfits, send egg salad recipes, laugh at memes, collaborate on song lyrics, and debate the merits of the metaverse. A lot of the people Wolf has met on the server also identify as trans, which has allowed her to form deeper connections than she’s found in real life.

“The friends I meet on the server are some of the closest people in my life. I can talk to them about anything, and I won’t have any fear of being misunderstood or made fun of. People on the server are generally more understanding than people that I meet elsewhere,” Wolf reflects. “We have a lot more commonalities than just 100 Gecs.”

Online fandom has transformed beyond dissecting songs and celebrating superhero franchises on forums and message boards. The modern internet fan group fosters a sense of community that so many young people lack in a tech-addled age. This fandom spreads beyond its source material to create a shared digital world — a place that’s open for business and busy with patrons whenever you need somewhere to go — and it lives on Discord.

Breaking Bad has been off the air for almost 10 years, but the 17,287-member strong “Breaking Bad Universe” Discord floods with messages about anime and fitness. The Star Wars server hosts a monthly book club; Fleet Foxes fans chat about diplomacy; the official New York Knicks Discord has a music channel. According to Discord, 50% of active users are part of at least three servers, and 25% of active users are in eight or more. “It might sound absurd, how something can be so important to you that’s just people talking online,” Wolf explains. “But for a lot of us, Discord is the only thing we have.”

Community can’t exist online without some form of fandom, whether it’s followers of an Instagram influencer’s aspirational lifestyle or a demographic that reads the same entertainment website, Marvel Cinematic Universe nerds or Charli XCX stans. But Discord ups the fandom ante. What draws users in, and raises the stakes, is the constant chatroom flow. For example, you might post in the Red Hot Chili Peppers subreddit about the band’s comeback, go back and forth with strangers in the comments for a few minutes, and close out of the browser tab. On Discord, the conversation never ends.

Discord’s emphasis on common ground has fueled its popularity, surrounded by social media networks that thrive on conflict and chaos. People are sick of posting into the fiery void, and there’s something to be said about preserving enclosed digital corners.

George Civeris and Sam Taggart initially introduced a Discord server for their comedy podcast Straightiolab as a low-stakes experiment, and to incentivize listeners to pay for their Patreon, about two years after their first episode. They made the server a perk for the lowest payment tier Patreon membership. “It only works if people are on it, and we didn’t want to make it too exclusive,” Taggart reasons.

Straightiolab began as a show about dissecting straight culture but has transformed into a sort of anti-podcast with a language of its own, a self-aware breakdown of the medium where they often talk about the podcast as they record it, and then talk about talking about it. Listening to the hosts and their guests feels like being in on a joke, and their Discord server is an extension of the gag. “The Discord kind of solidifies them as fans,” Taggart continues. Server members weigh in on episode topics and riff about their day-to-day lives. There are running bits and references to the show. I Now Pronounce You Chuck and Larry, a 2007 buddy comedy and Straightiolab motif, has a custom emoji.

The hosts occasionally do ask-me-anything hours in the server, but the Discord is mainly a by-fans-for-fans situation. “We leave them to their own devices, and it’s interesting to watch them become friends. I see their convos referencing each other’s personal lives,” Taggart says. Listeners become fans, fans become familial. “There’s always a conversation happening,” Civeris adds. “It’s more of a community than a fan community. Because they have this one common interest, they’re probably similar in other ways. I see it as a way to make friends and talk to people you wouldn’t otherwise meet.”

Discord’s emphasis on common ground has fueled its popularity, surrounded by social media networks that thrive on conflict and chaos. People are sick of posting into the fiery void, and there’s something to be said about preserving enclosed digital corners. As Max Read pointed out in a recent Substack, sites like Twitter have such low barriers to entry that it leads to lawless echo chambers and battlegrounds. By contrast, Discord servers, “which can maintain message board levels of cultural complexity,” are “higher friction.” Read continues, “When you make your platforms completely frictionless, you basically eliminate any solid ground or community commitment through which shared context or purpose might be built.” There needs to be enough “friction” to create a sense of responsibility and trust within online communities, but that friction shouldn’t be so rough that it doesn’t welcome new people or ideas. What makes Discord a potentially promising tool for fans is its happy medium.

The app saw spikes in usership during lockdowns, as people quarantined in their homes, away from public life and new connections. John (who asked us not to use his last name) moved to Portland in 2019 after living in Cleveland for his entire life. By the time lockdowns hit, the 30-year-old web developer hadn’t made local friends, so he turned to Discord. John is a member of 20 different servers but is most active in the server for his favorite podcast, Yeah, But Still. He keeps the YBS server open on his work computer to chat throughout the day, and then switches to his phone when the clock strikes 5. Aside from his fiancé, John has talked to YBS server members more than anyone else in his life over these past few years, even his family.

“Facebook is the social media equivalent of a dead mall, and Reddit is the social platform equivalent of going to, like, a convention for your favorite interests,” John laughed. “A good Discord server feels like going to your favorite bar and hanging out with all the other regulars. It’s like a dating site for friendship.” Meanwhile, attending the 24-hour Discord “bar” started to feel like a chore for Wolf, checking the 100 Gecs server during school, in the middle of the night.

“The platform lends itself to a 24/7 nature,” Discord senior manager of community Mindy Day tells NYLON. “Whenever you have time to check Discord, someone else will be there.” That always-on factor has become a popular, albeit ethically questionable, selling point for consumer tech and social media, the same kind of promise some tech execs and futurists are tying to the metaverse. You’re always consuming and creating content, and you’re never alone. You’re nowhere and everywhere.

Discord isn’t immune to most of what plagues social media as we know it. For one, the tool can easily be seized by the wrong kind of “shared interest group.” In 2017, white nationalists used Discord to plan the Unite the Right rally in Charlottesville. Just this month, a suspect in the recent Buffalo grocery store shooting was found to have used Discord to lay out his plans for the racist crime. Other complications run the gamut from content regulation to one-sided parasocial relationships.

For Pitchfork, Cat Zhang dissected the murky nature of music fandom on the messaging app, touching on how the all-hours access to musicians can create unrealistic expectations from the artist-fan relationship on both sides. Rivers Cuomo told Pitchfork that Weezer’s Discord server often acts like his assistant or a personal researcher, helping him find the best virtual reality gadget, Bach deep cuts, and “rare Cuomo data.” Like tweeting your life away for Twitter’s gain, Discord fandom can nurture a kind of free labor.

Unstable boundaries and rabid fan bases aren’t unique to entertainment-based servers. Discord’s constant motion and inner-circle vibe has made it a natural fit for conversations around crypto, which operates on a similarly volatile frequency and purportedly collectivist ideals. The VC-backed, Discord-based crypto social club Friends With Benefits is geared toward creative types and artists, but it’s extremely selective and pricey. Exclusivity is its main draw and potential downfall. The digital co-op, or DAO (decentralized autonomous organization), uses its own $FWB crypto tokens to determine which perks pre-vetted members have access to. To fully unlock all chat rooms on its Discord, considered the group’s headquarters, you need a “global membership,” which will run you 75 $FWB, $986 at the time of writing and $3,400 when the New York Times reported on the token a few months ago, pre-crypto crash. “Social clubs are one thing with expected elitism, but at least they don’t front like they’re inclusive,” one member told NYT. She added that the active channels are mainly “men in start-ups who play an instrument or two.” The flipside of a walled community is a locked gate.

Can the Discord fandom model be tweaked into harmony? Maybe not. But members and founders of these communities seem to recognize a missing piece, and are attempting to find it in real life. Friends With Benefits’ parties have become central to the group’s appeal. Straightiolab has been entertaining the idea of an IRL function for Discord members, but Civeris and Taggart say they can’t fully imagine how the sense of community would translate in person, or what it would look like in practice. Both John and Wolf have organized meet-ups with YBS and Gecs server friends, but those relationships have returned to their cozy online bases. “I wouldn’t consider any of these to be true friendships yet,” John admits.

While life online has made the desire for a “third place,” a location to spend time between work and home, less apparent, the human need for another physical haven is no less real. A post-digital physical space, where people are known by their avatars first and faces second, is imperfect, but it’s something.