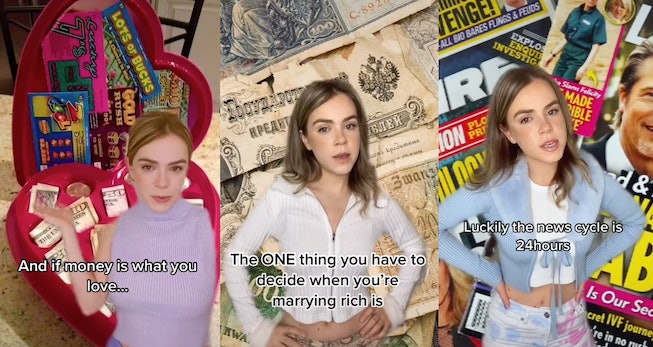 Drinks With Devin is TikTok’s latest cunning socialite, who, with an endless supply of candy-colored halter tops, offers advice for marrying rich, negotiating the prenup and how to talk to old monied parents. A mix of How To Win Friends and Influence People, noughties pop star, and a crypto-digger, Drinks With Devin doles out sharp satire that unpacks modern celebrity and wealth in a high-pitched Valley Girl cadence straight out of 2001.

Her video series around marrying rich, which include “So You Want To Marry Rich” and “So You Have Some Questions About Marrying Rich” which have garnered a collective 14 million views, answer burning questions such as: Where do you meet rich people? What are the differences between old and new money? What if you want to marry for love?

Drinks With Devin is as inspired by Succession and the Wall Street Journal Business section as she is by 2000s It Girls, and her TikTok videos lie at the confluence of both.

“I’ve always been really inspired by Britney Spears, Paris Hilton, Lindsay Lohan, these ‘bad girls,’ who I was not supposed to aspire to be like, because I went to Catholic school and I felt like, ‘oh it’s not feminist,’ to like them,” she tells NYLON over the phone. She started creating the character that would become Drinks With Devin her freshman year of art school. “That was in 2012, so obviously we had a much different understanding of these people. Now we have the Paris documentary, the Britney documentaries. But at the time it was like a bit taboo, especially in an art school space, to really want to be this bimbo-esque person.”

But as we as a culture are beginning to reframe the Spears paparazzi, “Bimbo Summit”-era as exploitative and dangerous for celebrities, Drinks With Devin has become more interested in conversations about wealth, particularly the differences between old and new money and the rise of crypto wealth.

“As a culture we’re just kind of starting to talk about wealth inequality and it’s weird, it very much mirrors the theme that I’m interested in, which is we all know it’s bad but we all still want it. We all talk about the wealth gap, but I think most of us would be happy if we had a lot of money and it’s this weird thing where we’re all just kind of trying to survive and it’s like, ‘Oh you’re not supposed to gold dig, but at the time same time its almost like a survival skill,” she says. “I’m torn, because of course you should like someone for who they are, but at the same time I think it’s valid to like someone because they have money.”

Drinks With Devin is part of a larger trend on TikTok, the trope of the self-aware, cunning socialite that TikTok creators like Serena Shahidi (glamdemon2004) and Caroline Ricke (@richcaroline) popularized to talk about disgraced financiers, the agony and ecstasy of capitalism, and navigating the dating world.

“The larger goal is to be able to bring these questions up in an interesting way and make people think,” Devin says. “I do feel like it at least plants these questions in people’s heads and hopefully that inspires them to also take it offline and think about it elsewhere.”