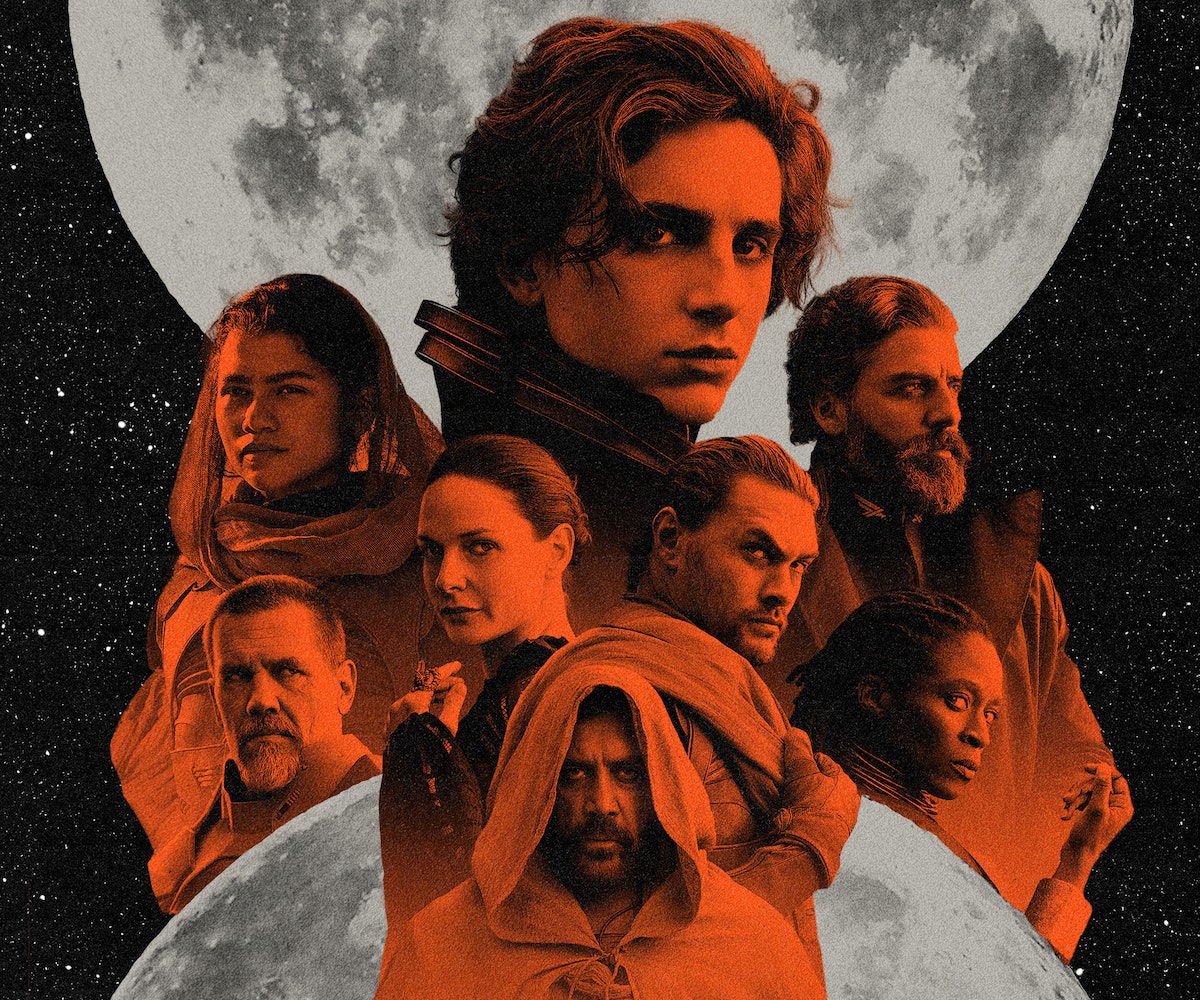 At the 2021 Met Gala, Grimes turned up wearing dark nebula couture and a sword, in tribute to Frank Herbert’s sprawling space series Dune. And though the genre-changing novel was first published in 1965 — becoming the highest-selling sci-fi novel of all time — Dune’s influence still reigns supreme, with dynastic drama and a byzantine mythology that would come to inspire Star Wars and Game of Thrones.

After multiple failures on the big screen — including Alejandro’s Jodorowsky’s wild, unfilmed magnum opus and David Lynch’s derided camp bomb — Dune returns on October 22nd, with Timothée Chalamet, Zendaya, and Rebecca Ferguson embodying the iconic archetypes of Herbert’s dark planet. Chalamet plays Paul Atreides, scion to the posh Atreides family, who has been tasked to bring order to the mysterious planet Arrakis, where a mind-altering substance called Spice promises cosmic transcendence — or abject madness. As Paul joins the noble Fremen to free Arrakis from the industrialist Harkonnen clan, he’ll discover new love, psychic gifts, and his own destiny in a savage galaxy.

Beyond its complex political allegories and metaphysical ideas, Dune still glimmers for its Piscean possibilities: cosmic consciousness, interconnected humanity, and a new world to come. Through its sprawling cast of characters, Dune hits different rungs of the spiritual ladder — one which matches with the archetypal journey of astrology. Before Paul, Chani and Lady Jessica debut on the big screen, we connect the characters of Arrakis to the 12 zodiac signs.

Fearless and ferocious, the sign of the warrior embraces new conflicts with a “let me at ‘em” enthusiasm. Taking the family to a hostile desert planet full of marauders, assassins, and sandworms? Count on Duncan Idaho, the Atreides swordmaster, to take the first steps on terra nova. On strange sands of corruption, betrayal, and hard choices, Duncan, like a true Aries, is driven by a pure and direct mission: Fight for the ones you love.

Harkonnens and Atreides may come and go, but there will always be Fremen on the sands of Arrakis. How do you beat someone who can’t be bought? Joining fellow Taureans Grace Jones and Cher is another unswayable, incorruptible boss: Stilgar, the stubborn, solid leader of the Fremen. The true Taurean roots down in their values, which, in Stilgar’s case, are his people and his planet. Though Paul was raised in the soulless diplomacy of the stars, he’ll only discover his integrity in the earth beneath his feet.

Though he’s officially the Atreides warmaster, Gurney excels at a variety of roles: teacher and father figure to Paul; superb combatant and marksman; poet and musician; and, astoundingly, an adept sandworm rider. Look to Gemini for such a vast array of talents; acting as the voice of the divine, Gemini can deliver the message through all manner of mediums. Embodying the mutability of the twins, Gurney surprises himself by how easily he adapts to the conditions of Arrakis.

Cancer will do anything to secure their family’s future, signifying the archetype of the warrior mother fending for her young. The conditions of Paul’s birth have long been predestined, and as mother to the messiah, Jessica must pass down the ways of her cosmic coven, the Bene Gesserit, to its chosen vessel, fulfilling Cancer’s work to perpetuate the heritage of their tribe. Though most of House Atreides doesn’t have the grit to survive Atreides, a Cancer can claw her way through anything, especially if it's for the sake of her brood. If Paul knows what’s good for him, he’ll stick with his mom.

In a benighted world of mediocrity and exploitation, we look to Leo, the king of the zodiac, for a sense of dignity and decorum. And when the tasteless Harkonnens have brought Arrakis to ruin, who you gonna call but Caladan’s most elegant Duke? In classic Leo style, Leto radiates charisma and love, inspiring devotion among his tight inner circle. Is Leto naive to believe that decency will endure in a desert of ethics? Perhaps. But in expressing themselves at their highest, Leo knows that their example will be followed.

Virgos define themselves by their place in the world, and the role they play in it. House Atreides’ Mentat employs Virgo’s skill for foresight, organization, and efficiency as he advises Leto on the most prudent strategies for ruling Arrakis. Of course, when circumstances spin out of their control, a Virgo spirals into neurotic self-doubt, wanting to be everywhere and nowhere at once. When sh*t gets real on Arrakis, Thufir has a hard time keeping a cool head. But, inevitably, a Virgo is devoted to service, and this one will always return to his duty and directive.

Love is Libra’s providence, and its currency. An unsentimental air sign at its core, Libra weighs and judges the value and promises of its relationships. When the Harkonnens hold Yueh’s wife, Wanna prisoner, the Atreides’ valued physician must choose between his house and his beloved. Though the Baron understands that Yueh’s loyalties can be quantified, he underestimates the sign’s core tenacity. As Gwen Stefani and Gwyneth Paltrow have taught us, you can’t keep a good Libra down: No matter how bad the circumstances, they’ll always find a way out, and a way up — even when you’ve locked them in a Harkonnen cell.

“She was like a touch of destiny,” Herbert writes of Paul’s first encounter with his soulmate, the Fremen warrior who shepherds his rebirth as Muad’dib. For Scorpios, every relationship is fated, meant to change your life forever no matter its duration. From his dreams on Caladan to his awakening on Arrakis, Paul knows that Chani is his destiny. As for Chani, when she’s in, she’s in, and no matter how high Paul ascends in the ladders of cosmic royalty, he knows better than to ever betray her.

To play the Bene Gesserit’s long game of generational manipulation, maintaining subtle control of the entire cosmos, you’ve got to be able to think big. Look to Sagittarius to go all the way in their grand pursuits, expanding beyond the bourgeois morals, traditions and restrictions of the current order. The HBIC of the Bene Gesserit embodies Sagittarius’s global point of view, but, as is customary for a sign that’s always looking to the future, she’s not very good at connecting in the moment. Who wants to hear about marriage and children when you’re cooking a centuries-spanning plan for royal subterfuge?

“The day hums sweetly when you have enough bees working for you,” Herbert writes, in the voice of the Harkonnen’s bloated head honcho. The dark architect of Arrakis outlasts other sci-fi supervillains by embracing not moral supremacy or godhood, but rugged capitalism. With an eye towards efficiency and longevity, Capricorns were born to govern, and can’t help but indulge in megalomania once they’ve been given a staff and a walkie talkie. Sure, the Baron may be so bloated and decrepit that he has to bark orders from floating jet suspenders, but he does run a tight ship! Who else could carry out the methodical decimation of House Atreides with such finesse? Maybe Leto, all star power, could have learned a thing or two from the grandmaster?

While the Empire thinks of Arrakis as a savage deathtrap to be plundered, Kynes envisions the possibility of a lush paradise. The true Aquarian works to build a better world, even if they may not live to see it, through new technologies and youth movements. And so Kynes, in the fashion of her sign, acts as a bridge between House Atreides and the Fremen, and a pioneer in the cultivation of Arrakis’ natural treasures. When the rest of the cast devolves into intercanine conflict, count on the Aquarius to keep a focus on the future.

Lisan al Gaib: “voice from another world.” Mahdi: “the one who will lead us to paradise.” There could only be one sign for a man of such titles, Dune’s messiah-in-training, awakening to his higher mind. The Piscean ocean connects all consciousness, and through the miracle of baptism — an elemental surrender of the individual into the collective — the soul elevates to its greatest potential. “Aware of things others cannot see,” the Christ-like hero of Dune embodies an ability to empathize with all of humanity. But the fishes swim in both directions, and like any ruler, Paul can exhibit cruelty and avarice as he rides the current of power.