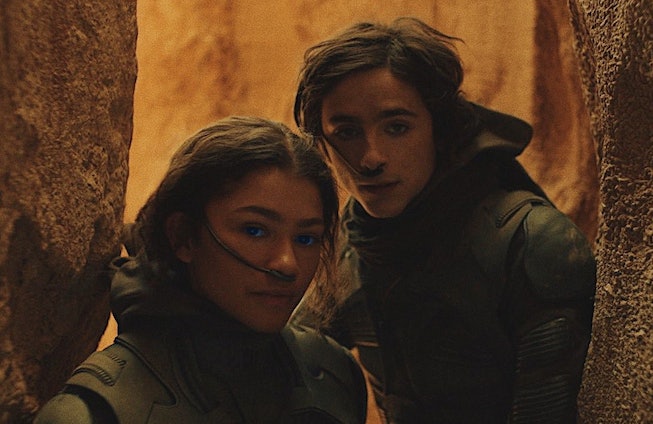 Since it was announced that Frank Herbert’s 1965 science-fiction epic Dune was going to be adapted yet again for the screen, there’s been endless questions about the film. Things like “when is it coming out?” or “why is the release date being pushed back again?” and even “should I watch the horrific 1984 version by David Lynch, too?”

Dune — a sprawling tale about giant worms, sand, a psychoactive substance called “spice,” and the people who love them — has historically had a hard time translating the majesty of its interplanetary future to the big screen. There’s a literal (and also excellent) documentary regarding this phenomenon, Jodorowsky's Dune, which follows Alejandro Jodorowsky’s failed attempt at directing a visionary adaptation of Dune in the 70s. Then there’s Lynch’s catastrophic rendition of Dune, and as if that wasn’t enough, there’s the weak miniseries, Frank Herbert’s Dune. Some might be tempted to call the Dune franchise unadaptable, or even cursed. But those people, dear reader, haven't seen Denis Villeneuve's 2021 version of Dune, and therefore have no idea what they're talking about.

Villeneuve, in a few words, totally freaked it. As a person of the Dune book reading experience, the latest Dune adaptation not only does justice to the text, but brings the colossal world of Arrakis to life in full force. The sandworms, known to the native Freman as Shai-Hulud? They're enormous and mean business. Timotheé Chalamet as Paul Atreides? He's having visions of his future baby mama Chani, played by Zendaya. The main antagonist, the Baron Harkonnen? Better believe he's just as grotesque and obese as Herbert's visions! Spending approximately one million years to read the dense novel is a beautiful experience, but Villeneuve’s take on the first half of the story is just as satisfying, ultimately wins as far as time efficiency is concerned — sorry!

As the masses finally get acquainted with the backstory and political inner workings of Arrakis, the film’s opening weekend blew up the box office, along with the true indication of cultural impact: memes, baby! The people have been tweeting, and they're liking what they see. Find the funniest memes and tweets about Dune, below.

Nothing but respect for my Shai-Hulud!

Spice is a psychoactive substance that fortifies health, expands sensory perception, and allows for prescience. Talk to your doctor if Spice is right for you.

And now for some classic Fremen humor