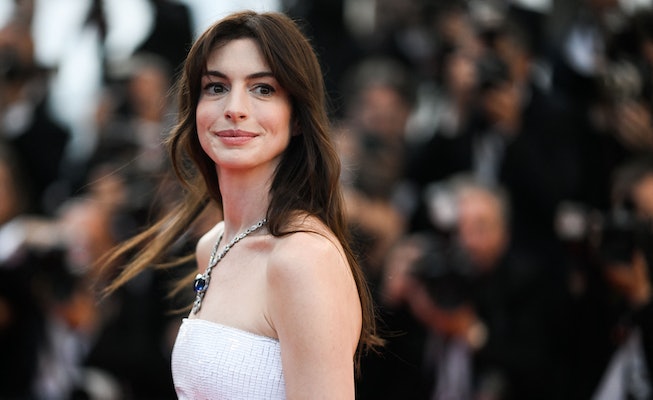 Ottessa Moshfegh, the patron saint of #BookTok, has not one, but two film adaptations of her tantalizingly gross novels in the works. Anne Hathaway and Thomasin McKenzie are starring in an adaptation of Eileen, Moshfegh’s 2015 debut coming-of-age novel about a 24-year-old woman in the 1960s, who works as a secretary at a juvenile detention center, lives with her alcoholic father, pops laxatives like there’s no tomorrow, and wallows in self-loathing.

McKenzie will play the title character, while Hathaway will play Dr. Rebecca St. John, the new counselor who changes her life when she arrives at the detention center — inspiring Eileen to explore new aspects of her personality and desires. That is, until Rebecca’s dark secret upends everything.

“This is a movie about a woman breaking free,” producer Anthony Bregman told Deadline. “Eileen is stuck inside the constraints of history, place, social class, upbringing, and imagination, and Rebecca provides her with a deviant way out.”

The film shot all over New Jersey this past winter, and according to Deadline, filming has wrapped. It’s unclear when the film is set to release, Moshfegh said in a recent interview with i-D she hopes it will premiere in the fall. (As an aside, Hathaway attended Moshfegh’s book launch party for her latest novel Lapvona on June 20.)

Here’s everything else you need to know about the film adaptation of Moshfegh’s Eileen.

The reason movies often fall flat compared to the book has more to do with the fact that reading a book takes a lot longer than watching a movie. Film adaptations are an exercise in concision, and who better to condense 300 pages of a book into a two-hour script than the author themselves? Fortunately, Moshfegh and her husband, writer Luke Goebel, took on the task.

And she’s a fan of the film

In an interview with i-D, Moshfegh called the screenplay a “very tonally faithful adaptation,” and shared: “I think it’s amazing.”

A24 and Moshfegh are a match made in the most tantalizing, strange corner of hell. It’s only a matter of time before the studio adapts one of her novels — our money is on it being Lapvona, her recent novel about the twisted goings-on of a medieval town — but in the meantime, Moshfegh and Goebel are penning an A24 script. Along with Elizabeth Sanders, the duo wrote the script for Red, White and Water starring Jennifer Lawrence and Brian Tyree Henry, about a U.S. soldier who struggles to readjust to life at home after suffering a traumatic brain injury while fighting in Afghanistan.

It’s not the only Moshfegh novel being adapted

Margot Robbie’s production company acquired the rights to Moshfegh’s cult favorite novel My Year of Rest and Relaxation, which has spawned countless TikTok devotees and even an aesthetic, last year. At one point, Greek director Yorgos Lanthimos was attached to the project, but it’s unclear what stage the film is currently in.

“What I can say is I have been working on the screenplay,” Moshfegh told i-D. “The way things work in movies is it takes a lot of time, because there are so many moving pieces and so many important roles. You have to factor in other people’s lives, my life, and everything has to come together at the right time. And this has just been something that has been just slowly brewing.”