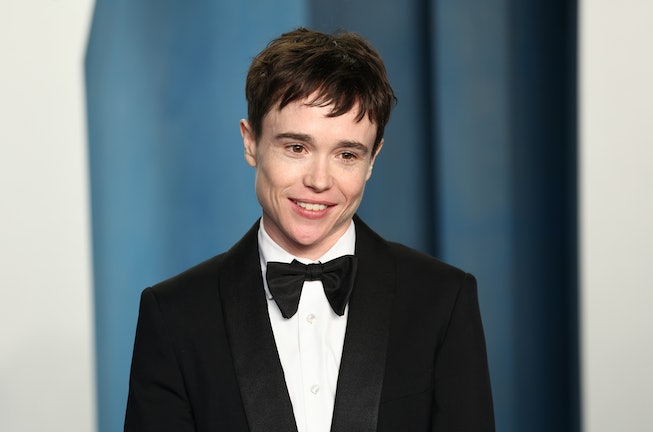 Elliot Page scooped Netflix — announcing on Twitter himself that his character will be transitioning in the upcoming third season of The Umbrella Academy.

“Meet Viktor Hargreeves,” Page Tweeted with an emoji of an umbrella for good measure, along with a screencap from the upcoming season, showing Page’s character sitting at a diner, gazing wistfully at something.

For the uninitiated, the show, which is based off a collection of comics and graphics novels created by My Chemical Romance singer Gerard Way, follows the lives of six siblings with superpowers while living under the threat of a global apocalypse. Page’s character, previously known as Vanya Hargreeves, has the power to unleash force through the use of sound. It’s a big gift for fans that Page, a top-notch actor best known for his roles in Juno (which still makes me cry every time) and Inception, is going to flex his acting chops by portraying a major life transition for a character that he has also experienced. A gender transition and the weight of the free world on his shoulders? Big stuff!

When Page first came out as transgender, insiders told Variety that Netflix didn’t have plans to change Page’s character’s gender on the show. “Trans actors can and do play both trans and cisgender characters. I’m sure Elliot will continue to be brilliant in Umbrella Academy and many different types of roles in the future,” Nick Adams, director of transgender media at GLAAD, told Variety at the time.

The Umbrella Academy fam seems to be really behind this plot decision. Netflix reposted the tweet, adding, “Welcome to the family, Viktor — we’re so happy you’re here.” The Umbrella Academy Twitter also replied, “WE LOVE YOU VIKTOR,” with two violin emojis, as a nod to Viktor being a violinist. Justin H. Min, who plays Viktor’s half-brother also reposted the tweet, writing: “ben would be proud.”

Season 3 of The Umbrella Academy premieres on June 22. In the meantime, you can watch a tiny teaser here:

And if you don’t watch The Umbrella Academy, there’s still Elliot Page updates you can use: The actor is coming out with a memoir. Pageboy, which was announced last month, will be published by Flatiron Books next year.

“The memoir will delve into Page’s relationship with his body, his experiences as one of the most famous trans people in the world, and will cover mental health, assault, love, relationships, and the cesspool that Hollywood can be,” according to Flatiron.