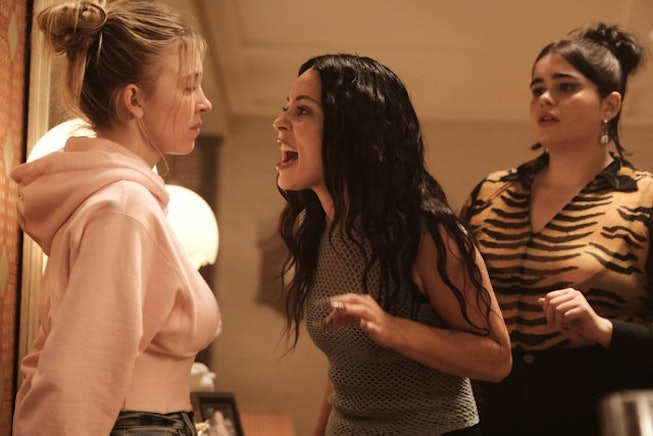 Watching bloopers used to require a dexterous hand on a remote control to find the special features on a DVD menu. Now, HBO makes them into a charming little blooper reel to enjoy between hours of endless scrolling. With massive layoffs and the company getting replaced by a new streaming service, we’re glad HBO released their vaulted Euphoria Season 2 blooper footage before some employee loses access to it. And they didn’t skimp out on us, either! In the nearly four-minute reel, we see sweet, funny, tender moments of TV’s hottest cast just be normal young people, even for a few seconds.

We see Angus Cloud, not stoic and emotionless, but actually laughing! We see Barbie Ferrera sticking her tongue out, Alexa Demie teaching the kid she babysits to do a British accent, or pretty much everyone saying “f*ck” when they forget a line. Speaking of forgetting, in one blooper, Zendaya messes up the order of “Jamie, Amy, Lanie,” where she gets tongue-twisted and says, “What the f*ck is the order?” Angus Cloud, meanwhile, introduces Chloe Cherry as Chloe instead of her character Faye, and Zendaya is shown having hard time falling out of a garbage can. In another blooper, Dominic Fike panics over his suprise co-star: a buzzing bug. Nobody said acting on one of HBO’s hottest teen dramas was an easy job!

In one particularly sweet moment, Zendaya and Hunter Schafer laugh their way through their rendition of Demi Moore and Patrick Swayze’s seminal ceramics scene in Ghost, and in another they make out on the garbage cans before a crew member says “beautiful,” to which they separate and gush, “Aw! That was so cute!”

Euphoria was renewed for a third season after drawing in a record-breaking number of viewers for Season 2. Zendaya, who will executive-produce the show’s third season, recently told The Hollywood Reporter she’s excited for the show to explore characters’ lives after high school.

“I think it’ll be exciting to explore the characters out of high school. I want to see what Rue looks like in her sobriety journey, how chaotic that might look,” she said. “But also with all the characters, in the sense where they’re trying to figure out what to do with their lives when high school is over and what kind of people they want to be.”

Watch the full blooper reel, below.