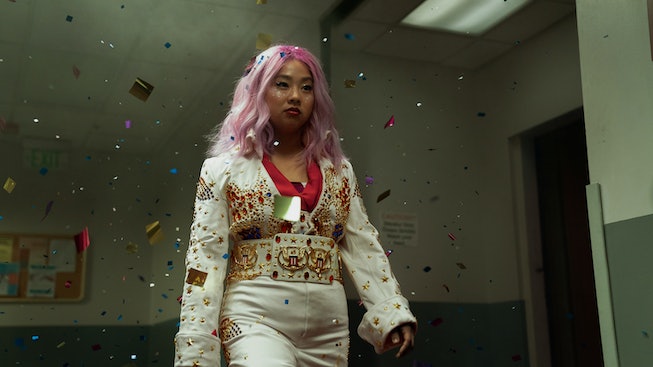 There’s so much to talk about when it comes to A24’s Everything, Everywhere, All At Once: the whimsy of its unpredictable, logic-defying multiverse, Michelle Yeoh and Jamie Lee Curtis playing lovers with hot dogs for fingers, or the way you suddenly find yourself sobbing over a scene where two rocks talk. But one of the most memorable parts of the latest film from directing duo the Daniels are the audacious looks, which range from from Curtis’ IRS employee-from-hell mustard turtleneck to Stephanie Hsu’s pearl-encrusted makeup for her role as Jobu Tupaki, the supervillain alter ego of her teenage girl character Joy.

Hair stylists don’t always get the recognition they deserve for translating the psychological aspects of a character through hair, which is often a character in and of itself and done so subtly that audience members don’t even notice. But in Everything, Everywhere, All At Once, hair stylist Anissa Salazar took on an enormous task: to create dozens of hairstyles across different characters and entire universes – a job that resulted in more than 40 different hair styles.

But the maximalist approach to hair follows the rest of the Daniels approach to filmmaking, as well as to the film’s reception, which has been astronomically good. “It’s fun to see an indie switch over into this almost Marvel-sense era,” Salazar tells NYLON over Zoom.

Salazar had worked with the Daniels previously, on 2016’s Swiss Army Man, which starred Paul Dano and Daniel Radcliffe as a farting corpse. The director duo was already working on the script for Everything, Everywhere, All At Once at that point, and Salazar knew immediately she wanted to be involved. Every year she’d keep checking in until the script was finished, and was eventually hired.

Similar to how Daniel Schenier said in an interview that a lot of the concepts for the film were based on rejected music video ideas “Rihanna said no to,” Salazar says a lot of the hair designs came from ideas she wasn’t able to incorporate for use on network television, and were influenced by things like 1997 Fall/Winter Vivienne Westwood, along with Cindy Sherman’s self-portrait photographs.

Nearly every look in the film is memorable, like Yeoh’s traditional Chinese opera updo or Curtis’ blunt bob with seven-inches worth of box dye regrowth. But the style that’s rightfully getting the most attention is Hsu’s complex, gravity-defying updo of braids in the shape of a bagel that’s supposed to represent a black hole of Jobu’s creation.

“We knew this was going to be some type of celestial goddess situation, like a heavenly feel. I wanted to make something that was really complex and deep, the way this character is at that moment,” Salazar says, explaining that she created the look by experimenting with cutting up pieces of styrofoam and arranging them on her own head. “My husband and I went to Tokyo in 2019 for Christmas and I was in the hotel rooms playing with anime wigs that I got and he was like, ‘You’re such a freak,’ and now we're getting all this positive awesome feedback and he’s like, ‘That’s insane, you were making a styrofoam cutout in the kitchen for a week, and now people are drawing it and talking about it for Halloween costumes.’”