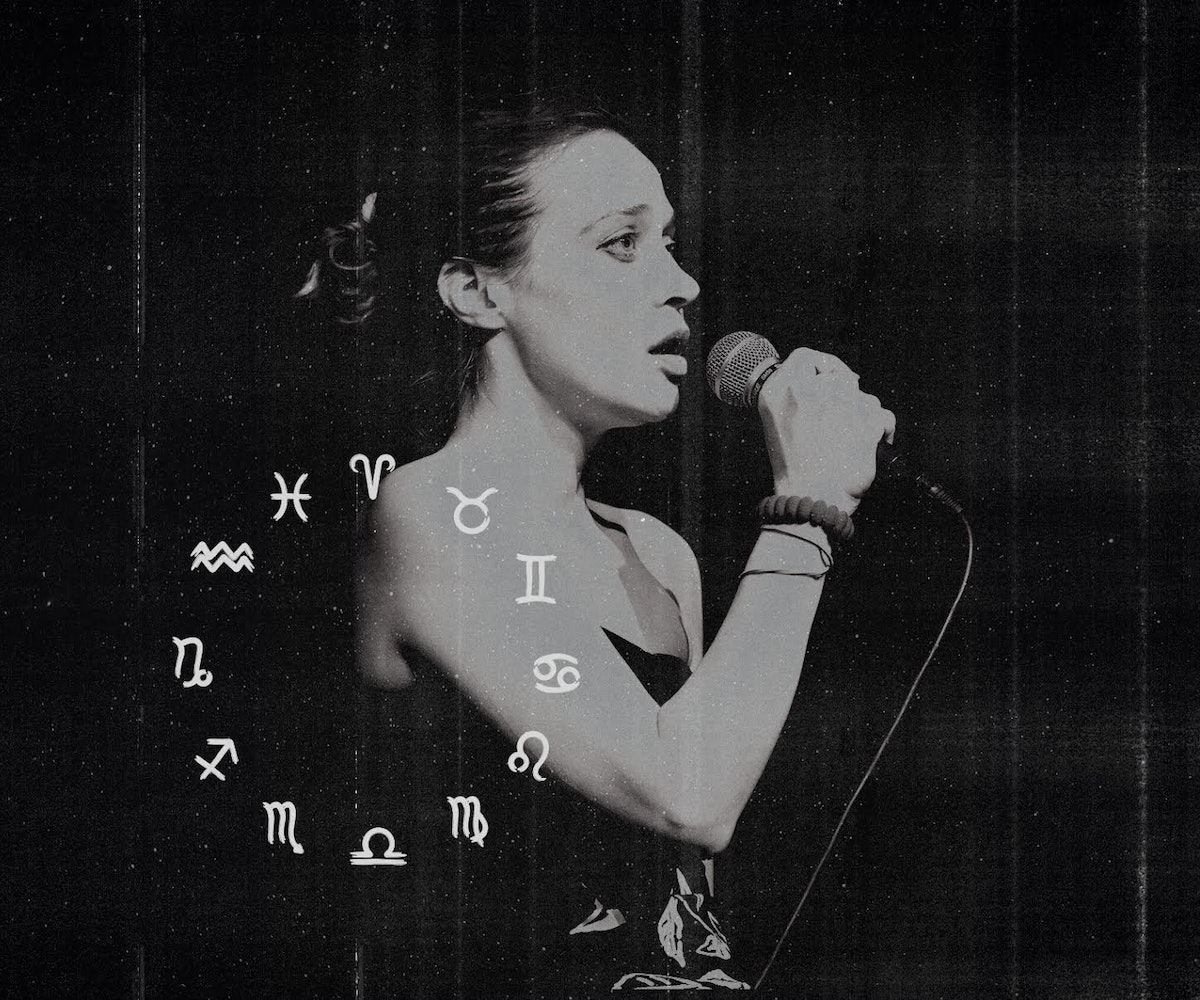 If you, like me, have been Fetching the Bolt Cutters for the past couple of weeks, you know that Fiona Apple's new album is the perfect accompaniment to quarantine madness and quarantine transcendence. While there are listeners out there who are just beginning to discover the power of our Virgo witch's songs, some of us have been "sullen girls" ever since she released Tidal in 1996. That's 24 years of being heavy with mood, friends. That's 11 years of mistaking paper bags for birds. The truth is, any one of Fiona Apple's albums would serve in this time of facing one's own difficult solitude, but only one of them was released with the expressed purpose of getting us through this contemporary moment.

In her interview with Rachel Handler at Vulture, Apple let us know that while the album was slated to be released in the early fall, she understood that we needed it now: "There are people who are alone at home or people who are not alone, who are at home with abusive partners or with people they just can't stand. Maybe they need to put on some headphones as an excuse to get away from those people, and maybe the music can help them get out their feelings inside that they want to scream at these people. So it just seemed very logical to me to put it [the album] out early."

In celebration of the gift she has given us, I've assigned a zodiac sign to every song on the album save one— "Drumset" — which, given the fact that she is both a Virgo Sun and Moon, can be an extra Virgo track!

When Fiona described herself as "pissed off, funny, and wrong," I understood this was the Gemini track. Pissed off, funny, and wrong is a very Gemini mood. The other side of matters, as there must always be in Gemini territory, is that the song itself is all three of those things. There's something very striking about Fiona writing an ode to a black girl whose words empowered her. There's also something troubling about it, the need to specify she wasn't gentle. The admission, that Fiona doubted Shameika was real, that she remembered her as a bully, and as harder than she was. And, the self-indictment of that admission.

Well, of course an album's title track should be its Leo track. The name of the album is taken from BBC's (RTÉ One) crime thriller The Fall starring Gillian Anderson who is, undoubtedly, a Leo Goddess and the one who delivers the line. That's not all: When Fiona sings "I need to run up that hill…I will…I will…I will…" there's just no way she's not referencing Kate Bush's "Running Up That Hill." Is Kate Bush a Leo? You betcha! This song is a Leo witch invocation.

First thing's first: It's imperative that I let you know that Fiona Apple is a Libra rising (a Libra rising in the anaretic degree). Secondly, if ever there was a Libra war cry, it would be "I won't shut up." A cardinal air sign, Libra fights language first — especially when they have assessed a situation to be ethically unsound. Fiona sings, "I would beg to disagree but begging disagrees with me," and there's a reason why few people have ever heard a Libra beg. A Libra would much rather cut down your position until you're begging them to let you just move over to their side.

You might think this is my Sagittarius song because it has the word "sport" in it, and that would be a good but incorrect guess. "Relay" is my Sagittarius song because it is using a sport metaphor to talk about the proliferation of harm, and it is therefore a song that doubles as an allegory: "But I know it if I hate you for hating me I will have entered the endless rage… Evil is a relay sport / When the one who's burnt turns to pass the torch." Here we get to the philosophical meat of the Sagittarius taco. This allegory uses the metaphor of passing the torch. That's right, a fire that is moving, there's nothing more Sagittarian than that.

It’s not that Cancers are better at loving someone than any other sign, it’s just that they’re really good at cultivating an atmosphere of love. They evoke feelings of devotion and nurturance in others. It’s why Cancers can pretty much get away with murder. Cancer energy is all over this track, it’s the fact that Fiona begins by describing her soft sentimental gestures as feats, “I gave you pictures and cards on non-holidays and it wasn't because I was bored.” It’s the way she sings “It was because I was loving you so much It's the only reason I gave my time to you,” maintaining that both her affection and her time were equally precious and still are, even when you’re gone.

There’s a lot going on in this song — a lot under the surface that you can’t know but you can feel.

It’s emotionally unnerving and Scorpio is the queen of this shit, of songs that are mournful and erotically dangerous: “We were cursed the moment that he kisses us.” That line would be enough to cement the track into Scorpio territory, but there’s more if we want it. Behold, Scorpio paranoia, “I wonder what lies he’s telling you about me,” and Scorpio deviancy, “When I learned what he did, I felt close to you. In my own way, I fell in love with you.”

This song is entirely outside of cultural norm, and I’m not just talking about the way Fiona is able to take the word ladies and make of it an endearing, critical joke. Ladies is a song about collective memory over the individual narrative. It’s about refusing to compete with other women, about “the looming effects of the parallax view” which, by the way, is the primary view that plagues all Aquarians everywhere. When Fiona sings “no love is like any other love, so it would be insane to make a comparison with you” she is singing the song of our illustrious fixed air sign who was born thinking with her heart and feeling with her brain.

The title of this track might have you thinking it belongs with air signs, but the moment the song begins, you know this has Earth written all over it. What does Fiona spread like? Strawberries. What does she climb like? Peas and beans, baby. That’s cardinal Earth and this is a song about functional depression if I’ve ever heard one. What does Capricorn do with that heavy balloon? They “keep it up to keep the devil at bay.” Ah, and what does a Capricorn placement do to get through? Well, they “suck it in so long” that they’re “bursting at the seams. “

Fun fact: Cosmonaut is the specific word for a Russian astronaut. A song about being cosmic sailors (what’s up etymology) might have you mistaking this for an Aquarius song, but I’m here to guide you back to Earth. First, this is a song about exploring affection with “way more gravity than when we started off.” And what is gravity? A force that attracts a body toward the center of the Earth. Second, a Taurus definitely possessed Fiona’s body when she wrote the words “Your face ignites a fuse to my patience, whatever you do is gonna be wrong. There's no time to interrupt the detonation, be good to me before you're gone.” Prove me wrong.

Virgo is ruled by the planet Mercury, and if had to pick the most mercurial song on this album (a feat) it would have to be “For Her.” The chanting, the fast pace, the euphoric beat, the sudden and critical shift to Fiona’s bold courageous voice bidding good morning to her rapist. It’s really an upper cut. If that doesn’t convince you this is THE Virgo song of this Virgo’s album, consider the fact that Virgos collect and guard information and this Virgo is through with containing it, “It's the season of the ward and she's trying to cut the cord. She's tired of planting her knees on the cold, hard floor of facts.”

This is a song very much on the Virgo / Pisces polarity axis. It’s like “here are all the material things I am assessing as indications of your feelings about me” and “I did nothing wrong. I don’t believe your reasoning.”

Aries is all about movement. Aries is a cardinal fire sign that lives for starting things, for getting on with it. You can’t even get an Aries to comfortably sit in front of a Zoom meeting for more than 20 minutes. They will inevitably say something like “OK! I don’t have all day!” This song is an Aries chant about cardinal growth. It’s a song that shifts from impulsivity that is reactive “Up until now in a rush to prove” to initiative that is self-actualizing “But now I only move to move.”