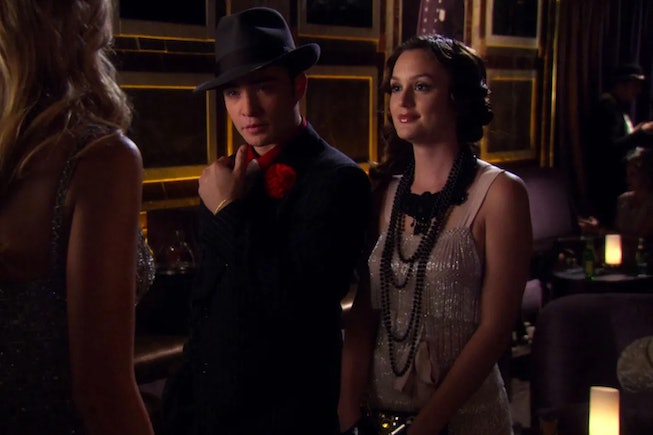 The only demons Gossip Girl exorcises on Halloween are its frighteningly firm grasp on tabloid culture and media manipulation. Nothing is ever as it seems on Gossip Girl, because of course it’s not: It’s a show about conniving rich teens, and how their lives revolve around unconfirmed gossip. But on Halloween, the gang takes their powers of manipulation to media-influencing new heights that go beyond the purview of Dan Humphrey’s silly little hobby. (Spoiler alert: Sorry!)

In Season 3, Episode 7 “How to Succeed in Bassness,” Chuck decides to open his club on Halloween in order to promote his hotel; Serena is trying not to get fired at her new PR job; Jenny attempts coolness by unleashing a reign of terror over her subjects AKA being rude to Eric and Jonathan, and Dan and Olivia, played by Hilary Duff, consider consummating their relationship. While it’s still absurd that a 19-year-old could acquire a liquor license let alone open a club, we can suspend our disbelief because there are at least 10 more absurd Gossip Girl plots I can think of off the top of my head.

All of the drama in this episode centers around PR stunts. Gossip Girl has become the student, not the teacher. The only thing more terrifying than super rich kids are super rich kids who have a staunch command of the press cycle.

Dan is freaked out about having sex with Olivia for the first time because Nate shows him a sex scene in her vampire film where the sex is so good she levitates. Sure, it’s a sex scene, but Olivia and Patrick were dating at the time, which makes it more like a sex tape, according to Nate. (Nate, by the way, should also consider getting a hobby.) When Dan tells Olivia he’s nervous, she reveals that the relationship was just a publicity stunt; they never actually dated. Meanwhile, Olivia’s publicist, who is also Serena’s boss, wants Serena to get Olivia and Dan to break up; it’s important for Patrick’s career for him and Olivia to be dating.

Chuck realizes his liquor license is fake, but throws the club opening party anyway, then calls the cops on his own party to guarantee front-page headlines. “I’ll take care of the paparazzi,” Blair tells Chuck with a conspiratorial smile after he reveals his plan.

Serena is pissed: All of her celebrity PR clients are at risk of having mugshots — or God forbid, TMZ videos, taken.

“When we found out the liquor license was fake, we could with wait for Jack [Bass] to call ABC to take us down or we could take control and call the police to blow up the party for a night nobody would ever forget,” Blaire explains matter-of-factly. “Without your celebrities, we’re buried in the city section. Now we’re front page news.”

To distract the paparazzi, Serena leads them to snap photos of Dan and Olivia making out. When one of them asks who Patrick is dating, Serena volunteers. “I am,” she says and he dips her into a front page-worthy kiss — thus saving her job.

The references to publicity and tabloid culture painfully reflect where we were as a culture in 2009; rewatching it gives me flashbacks to the languid days I spent poring over Perez Hilton and his basic command of MS Paint. At one point, Blair even leaves Marc Ronson a message. “Perez Hilton drew his own tears on his face because he was so sad he wasn’t there,” Blair triumphantly states. Gossip Girl is arguably too self-aware in this episode.

Chuck’s club shutting down is now front page news; his hotel doubled its bookings overnight. Once again, the teens have not only sabotaged each other, but have built what is effectively the most successful astroturf campaign of the show — even without the help of Gossip Girl. It’s terrifying because it’s how the world really works.

NEXT UP
Culture
Jenna Ortega’s Childhood Hobbies Included Animal Autopsies
Culture
Remember When Gossip Girl Made The Quintessential Thanksgiving Episode?
Culture
The White Lotus Will Return For A Third Season
Culture
Aly & AJ's "With Love From" Video Is A Postcard Of Melancholy