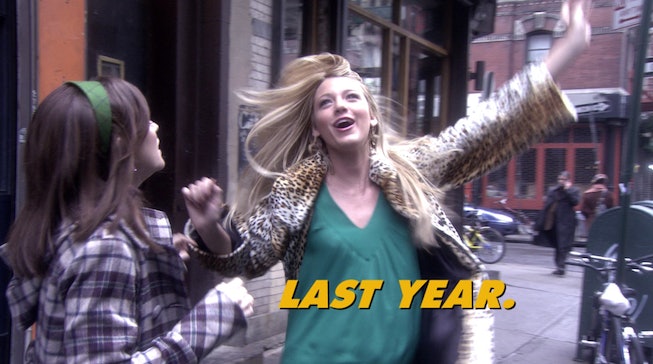 There’s no Thanksgiving tradition I look forward to more than watching the Gossip Girl Season 1 Thanksgiving episode “Blair Waldorf Must Pie.” The episode is the show at its best — which it accomplishes even without having Chuck Bass in it — a perfect cocktail of salacious gossip, dark psychological, underpinnings and the year 2007.

The episode is told in sepia-toned flashbacks to last year’s Thanksgiving, which shows Serena in her 15-year-old socialite prime, already blackout in the morning, while Nelly Furtado's "Promiscuous” plays. She trips and falls in the street and Dan Humphrey, who at this point has only obsessed about her from afar, heroically steps in front of a cab to save her, then and proceeds to obsess about their interaction all day (ugh, even in the pre You days...) Last Thanksgiving, Blair’s dad had yet to leave her and her mom for a model named Roman, though we see that last Thanksgiving is the day they met, after Eleanor invites Roman to dinner. “Not this one,” she warns him. (Screaming!) But this Thanksgiving is different: Serena is dating Dan; Blair’s dad lives in France with Roman; Nate’s dad is an addict in hot water for embezzling money; and Lily and Rufus have rekindled their long lost love affair with a steamy make out.

Of course, the episode shines in the details. Lily, Eric, and Serena waltz through Chinatown and consider making Peking duck — as if this family would ever go below 59th street to stroll through Chinatown? Blair comments on her good mood: “Sometimes because I increase my Lexapro, sometimes because my dad’s in town.” Dan chastises Lily for reading a Nicholas Sparks book like the a Literati-in-training he is, and in turn, Blair chastises Dan’s loft for having a garage door in the middle of the room. Dan picks up Serena, Lily, and Eric from the Upper East Side in a van (?) to drive them to DUMBO. And through it all, Nate still manages to be the most boring person alive, even after his dad overdoses. Not to mention, the clothes and music are peak 2007: Blair’s empire waist lace collared dress and lengthy pearl necklace, Jenny’s puffy short sleeves, Serena styling her ruched, shamrock green dress with a cheetah-print coat and stiletto ankle boots, OK Go’s “Here It Goes Again, and Vanessa Carlton’s “Nolita Fairytale.”

To check off the gossip part of Gossip Girl, it’s the Thanksgiving episode that the kids are introduced to Lily and Rufus’ wannabe Almost Famous love story. Lily comes to Thanksgiving dinner at the Humphreys not knowing that Allison is there and she pretends to not know Rufus, something nobody does in real life. It’s revealed during dinner that Rufus has a song with the same name as Lily’s horse and sleuthing offspring Dan, Jenny, and Eric put it together that their parents dated, prompting them to wonder if they’re actually siblings, because who doesn’t have a little incest threat? This episode also contains my favorite Lily line of all time, where she says she spent “nine hours on the Ohio turnpike with Jane's Addiction.” We get it! You used to be cool, Lily! You’re not like the rest of the old money Park Avenue moms! (An aside: Jane’s Addiction has never been so culturally relevant as on Gossip Girl. The show references them so many times I’ve wondered if it’s #sponcon.)

But we also have real consequences for the emotional turmoil these kids have to phase with their wacko rich families, something that, as a high schooler who spent Thanksgiving with friends’ families to escape the dysfunction of my own, still hits. We learn that Blair used to be bulimic and we see her relapse after her dad is a no-show to Thanksgiving dinner. She self-medicates, eating an entire catered pie, angrily plunging her fork in again and again as we witness the guise of her perfectionism finally crack.

The format of the episode mirrors what a lot of us do on holidays, which is taking stock of what your life looks like and what it looked like the prior year. Because everything is the same — the specific meal that you wouldn’t eat at any other time, the football game and parade being on TV, the massive lines at Best Buy — the day serves as a blank canvas that leaves you a little too much room to think about Thanksgivings past. In the episode, we see how much a year can change in the endlessly tumultuous lives of these moneyed high schoolers. Nobody had a good Thanksgiving. Things aren’t really okay for anyone, but by the end they’re all having moments that are as good as things can be for their circumstances: Blair and her mom drink tea standing at their marble countertop, the Humphreys play football in an empty Brooklyn Bridge Park in what is their last Thanksgiving as a family, and because Serena loves nothing more in this world than cosplaying middle class, she, Lily and Eric eat fries at a diner. Gossip Girl may plant a fake pregnancy rumor the next day, but for one day, things are manageably messy.

This article was originally published on November 23, 2021