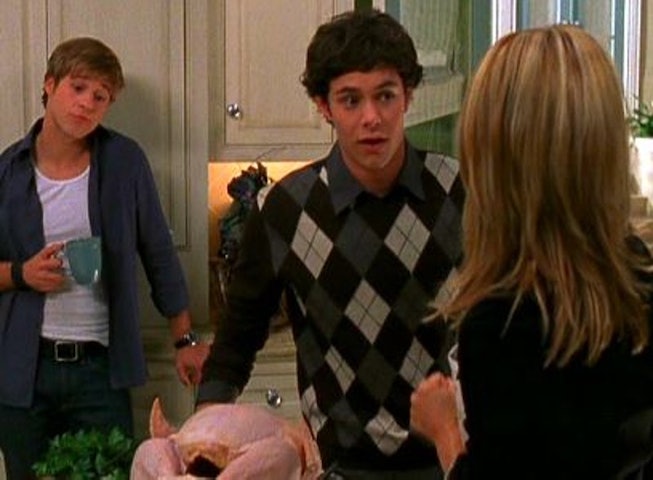 For some people, the apex of TV watching on Thanksgiving is the Westminster Dog Show. For others it’s the Macy’s Day Parade. For a lot of people, it’s football. For me, it’s laying prostrate on a couch after dinner watching Gossip Girl Season 1, Episode 9. Thanksgiving TV episodes are the best holiday episodes because they’re never as earnest as Christmas episodes, and because Thanksgiving is just as much a friend holiday as it is a family one. It’s easy to see ourselves in Thanksgiving episodes — whether it be a random group of friends coming together for a messy night or a tense family dinner that leaves someone in tears. (Just me? Okay!) Anyway, read on for our favorite Thanksgiving TV episodes — including haunting trips to Chino, turkey made in a dryer, and more.

Nothing beats Gossip Girl Season 1, Episode 9. The episode is told in flashbacks to Blair and Serena’s Thanksgiving the year prior, a time when Serena is running around in a drunken stupor on the streets of Manhattan and Blair is happy and in love with Nate, but in the throes of an eating disorder. Fast-forward a year later to a very different Upper East Side; Serena is spending Thanksgiving with the Humphreys and Blair’s gay dad ditches the States to move to France with a model, but everyone still manages to find a rare moment of peace in their new lives. (HBO Max)

Lorelai and Rory attempt to attend four different Thanksgivings, because if there’s anyone that can eat four dinners, it’s our favorite prediabetics. The only one you really need to know about is Lane’s, which Adam Brody attends and eats Mrs. Kim’s Tofurky because he likes Lane that much. (Netflix)

The O.C. is best known for creating Chrismukkah — the fictional holiday Seth Cohen lives for that includes “eight days of gifts, followed by one day of many gifts.” There’s even an O.C. soundtrack Chrismukkah edition. But The O.C. Thanksgiving episode is seriously slept on. In Season 1, Ryan goes to Chino to visit his incarcerated brother and brings Marissa, Caleb brings Julie Cooper to dinner and Seth tries to figure out if he should date Anna or Summer, bringing together the combination of emotional, ridiculous and charming plot lines that make us love the show so much. (HBO Max)

Friends has an insane number of Thanksgiving episodes. Pop in any season and go to the eighth or ninth episode and you’ll see the gang up to some Thanksgiving shenanigans. The beauty of network TV sitcoms! In this episode, Brad Pitt guest stars while he was married to Jennifer Aniston (RIP) as an annoying hot guy who started an “I Hate Rachel” club in high school. (HBO Max)

Grey’s Anatomy, Season 2, Episode 9 - “Thanks for the Memories”

Before Izzie banged a ghost, Meredith hung out in the afterlife, and a patient had an undetonated bomb in his chest, Grey’s Anatomy had normal storylines. In the Season 2 Thanksgiving episode, George shoots a turkey and Izzie just wants to have the perfect Thanksgiving in their cute Queen Anne house, but doesn’t know how to do anything and doesn’t have Pinterest or Tiktok to consult. (Netflix)

It may not feature Lawrence in a turtleneck, but he does slide into Isa’s DMs after learning about Condola’s divorce at her Friendsgiving while Mya’s “Case of the Ex” plays. Relatable content! (HBO Max)

Jess invites her crush (Justin Long) to Thanksgiving dinner (very Jess behavior) and it does not go well. She tries to cook a turkey in a dryer (she’s kooky!) and starts a fire, and the gang discovers the corpse of their elderly neighbor across the hall, which traumatizes her crush, but he still likes her anyway. Shenanigans! Most shockingly, Zooey Deschanel did not find a reason to write a song into the episode for her to sing. Netflix.

It may not have anything on The Godfather Thanksgiving scene, but on this Italian American’s family’s Thanksgiving, Jackie Jr. gives Meadow free ecstasy at a party, chaos queen Janice invites her narcoleptic Christian boyfriend to Thanksgiving and Tony meets the hot Mercedez Benz dealer, Gloria Trillo. (HBO Max)

Yes, you can have Thanksgiving with the most dysfunctional family on TV! Between Shiv wearing burnt orange, everyone drinking out of the finest crystal goblets in Manhattan, and talks of restrictive prenuptial agreements, the Roys take familial tension to a new level. Logan slaps his grandson over a memory game! You know the deal. (HBO Max)

Buffy’s Thanksgiving episode does something our other favorite TV episodes don’t, which is try to tackle the colonialist history at the heart of the holiday. In this episode, there’s a Chumash spirit seeking revenge on behalf of his people, and the Scooby Gang questions oppression and colonialism. (Hulu)

Like The O.C., Seinfeld is better known in holiday TV lore for creating Festivus, the alt-holiday celebration to avoid the unavoidable commercialism of Christmas. But the Thanksgiving episode has Kramer taking all of Jerry’s shoes to a repair shop, leaving him nothing but cowboy boots to wear, and Elaine has a crush on Jerry’s dentist in this messy celebration of Friendsgiving at its finest. Netflix.

The Fresh Prince is known for giving us a bounty of Thanksgiving episodes, the best of which is considered to be Season 1, where Will’s mother comes into town and the kids have to cook for the adults and everyone dances to The Temptations' “Ain’t Too Proud To Beg.” Wholesome family fun! (HBO Max)