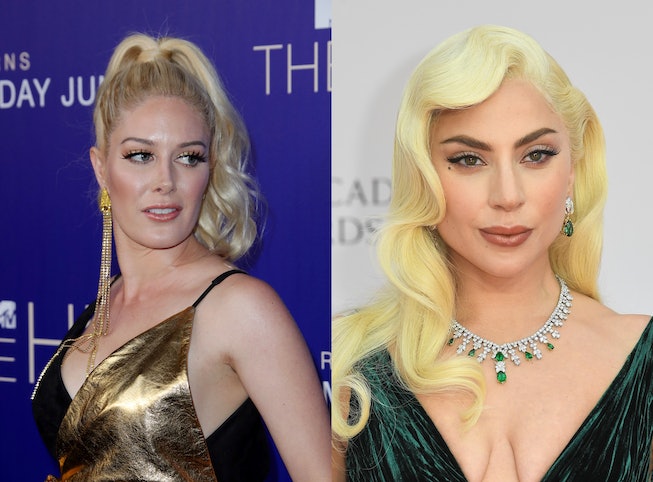 The Hills star Heidi Montag knows how to grab a headline. She eats raw meat out of a Ziploc bag for “fertility.” She tweets things like “i love being” and “i want to start using bigger words.” She is still with Spencer. Now, she’s taking her penchant for talents to an unseen level: She’s going after Lady Gaga.

Montag accused Gaga of sabotaging her music career, in an interview with “The Unpopular with Jacques Peterson” podcast on March 21. “People are, like, ‘I love Lady Gaga,’ and I’m sure she’s great, but I have not had the best encounter with her,” Montag said.

Montag said she and Gaga had both been working with producer RedOne in the late-aughts. RedOne, who was also Gaga’s writer partner, had high hopes for Montag’s music career, something that never really came to fruition. He even told Us Weekly she was a “born star.” (This I believe!)

RedOne asked Gaga’s permission for Montag to release a track called “Fashion,” that Gaga had originally written on her debut album Superficial, which I did not know existed until this very moment and I’ve seen every episode of The Hills. To be fair, I think Montag would have been a little too earnest for a song with lyrics that requite a little bit of cognitive dissonance: “Look at me now/ I feel on top of the world in my fashion/ Looking good and feeling fine/ (Slay, slay).” But I digress.

Montag used the song for an appearance on The View, but when producers of the 2009 rom-com Confessions of a Shopaholic wanted it for the film, Montag says Gaga told RedOne she wanted the song back. Montag alleges that Gaga told RedOne she would not work with him anymore if he kept working with Montag, which in turn severed their relationship and evidently sabotaged Montag’s music career.

“I think she saw that RedOne is one of the biggest and best producers and writers and if he takes Heidi that’s taking my magic,” she explained on the podcast. “He wrote ‘Just Dance’ for her, he wrote almost every song with her and produced it. So of course she’s not going to want to share that when at that moment I was a potential rival for what she was doing.”

This incident wasn’t the first time Montag and Gaga crossed paths, something that feels so unlikely now given the wide canyon of their respective levels of fame. But in 2009, things were different. Obama was president! In a quintessential 2009 Hills moment, Lauren Conrad and Whitney Port sew Gaga into a vinyl hooded catsuit after her zipper breaks before she launches into “Lovegame.” She’s identified onscreen as “Interscope Recording Artist,” in what is certainly the only scene Gaga is ever in where she is the least famous person in the room.

NEXT UP
Culture
Aly & AJ's "With Love From" Video Is A Postcard Of Melancholy
Culture
Jenna Ortega’s Childhood Hobbies Included Animal Autopsies
Culture
A Britney Spears-Inspired Musical Is Coming To Broadway
Culture
Mowalola Teams Up With Bratz For A Daring, High Fashion Collection