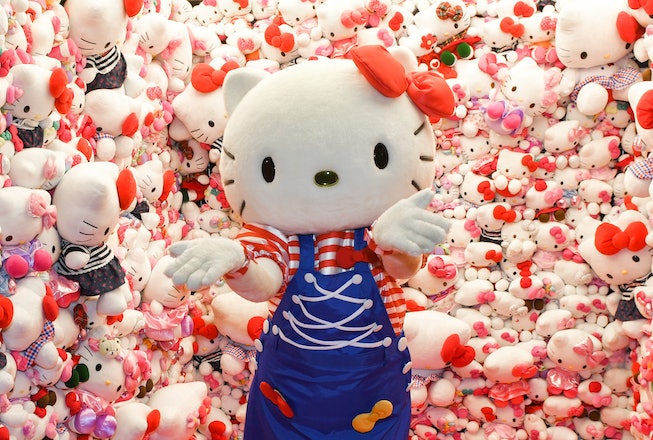 Everything you love is becoming an NFT, which doesn’t necessarily change the way we consume or think about our favorite pop culture artifacts, but is more just a sign that nothing (literally nothing!) is sacred. Hello Kitty, the ubiquitous little face that I just learned isn’t actually a cat, but is instead a little girl who has a cat of her own, is a cultural force — appearing on everything from backpacks (thank you, 2005 Target collection) to motor oil to sake, and starting next year, the NFT market.

Sanrio and NFT company Recur are partnering so fans can buy and trade Hello Kitty digital collectibles, as reported by the Hollywood Reporter. I, for one, really appreciate the candidness of Sanrio exec Silvia Figini, the COO for the company’s EMEA, India and Oceana regions, who said: “To explore this new and innovative business is for us a big challenge. For Sanrio, stepping into the NFT space adds a new way of being part of contemporary culture and provides our fans a new way to enjoy our brand.” Understanding this stuff is a big challenge!

It’s unclear yet what exactly we can all buy, but Recur co-founder and co-CEO told the Hollywood Reporter, it would be an “entire Hello Kitty world of many collectibles.” Though only Hello Kitty will be available for NFT consumption, sorry to fans of Pompompurin. (Hands down, the cutest member of the Sanrio fam. But is he even a dog? Who knows?!)

Recur is working hard to build a slammin’ portfolio of other popular characters, which is smart. Hello Kitty joins Recur’s portfolio of pop culture gold. Last month, ViacomCBS and Recur partnered to turn characters across CBS, Paramount Pictures, Nickelodeon, Comedy Central, MTV, Showtime, and BET into NFTs. If there’s anything that could heal my brain when it comes to NFTs, it would be the opportunity to buy a digital collectible that is Patrick Star-related.

Bt the way, if you’re in shock at the revelation that Hello Kitty, is in fact, not a cat, you can read more background on the revelation here. And you’re not alone: Even Christine R. Yano, an anthropologist who spent years studying the phenomenon of Hello Kitty and served as the curator for the Japanese American National Museum’s retrospective in 2014, didn’t know Hello Kitty was a cat.

“That’s one correction Sanrio made for my script for the show,” Yano told the Los Angeles Times. “Hello Kitty is not a cat. She’s a cartoon character. She is a little girl. She is a friend. But she is not a cat. She’s never depicted on all fours. She walks and sits like a two-legged creature. She does have a pet cat of her own, however, and it’s called Charmmy Kitty.”