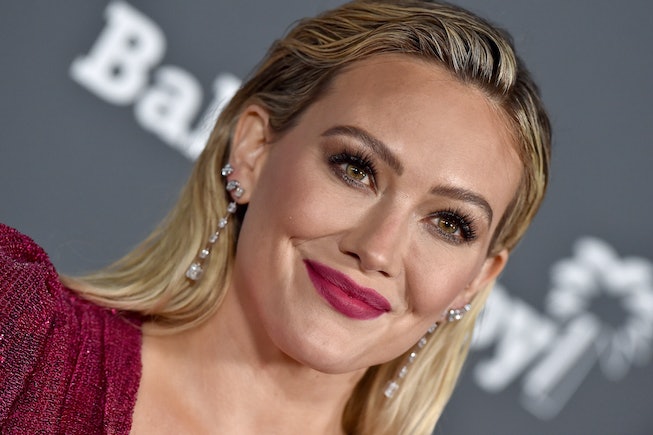 Hilary Duff is starring in How I Met Your Father — a spiritual sequel to How I Met Your Mother for the dating app era — which means a slew of new interviews where she’s dishing on everything from the plot of the long lost Lizzie McGuire reboot to how the media treated Britney Spears unfairly.

Unlike most of her celebrity peers, Hillary Duff didn’t have a “rebellious” phase where she was being chased by tabloids or getting DUIs that made it easier for her to break out of her Lizzie McGuire character. Duff remained a “good girl” in the eyes of the public — though she did tell Bustle in a recent interview that she, too, partied some nights but knew she had to be careful.

“I knew I had a responsibility. If I found myself in a situation of being drunk at the club, I didn’t want to be on the cover of a magazine like that,” she said. “I kept a low profile, [used] the back door, not the front door.” This was in the early 2000s Bimbo Summit era over which, in the wake of Britney Spear’s conservatorship trial, we’re having a greater cultural reckoning, examining the ways we treated young women celebrities, particularly those that were struggling with substance abuse or mental health issues.

“I 100% relate to and feel for her,” Duff says of Britney Spears. “It was so unfair what we all did to her. Halsey shaves her head and it’s celebrated. Britney Spears shaved her head a long time ago, and it was like, ‘She’s gone mental! Check her into the institution.’”

Duff also shared the difficulty of breaking out of the character of Lizzie — a character that felt both intensely, personally, her but that also wasn’t the sum of her. It also certainly wasn’t the only role she ever wanted to play. “I was like, ‘I’m me! I’m Hilary, not that person. That’s a made-up person,” Duff told Bustle. “It was a desire to be seen as a person outside of a character. By the time I was 18, I was like, ‘If I hear that name [Lizzie McGuire] one more time!’”

And as of now, Lizzie McGuire is staying in the Disney Vault after Disney+ ultimately scrapped because they didn’t want audiences to Lizzie to be a real adult (i.e. get laid).