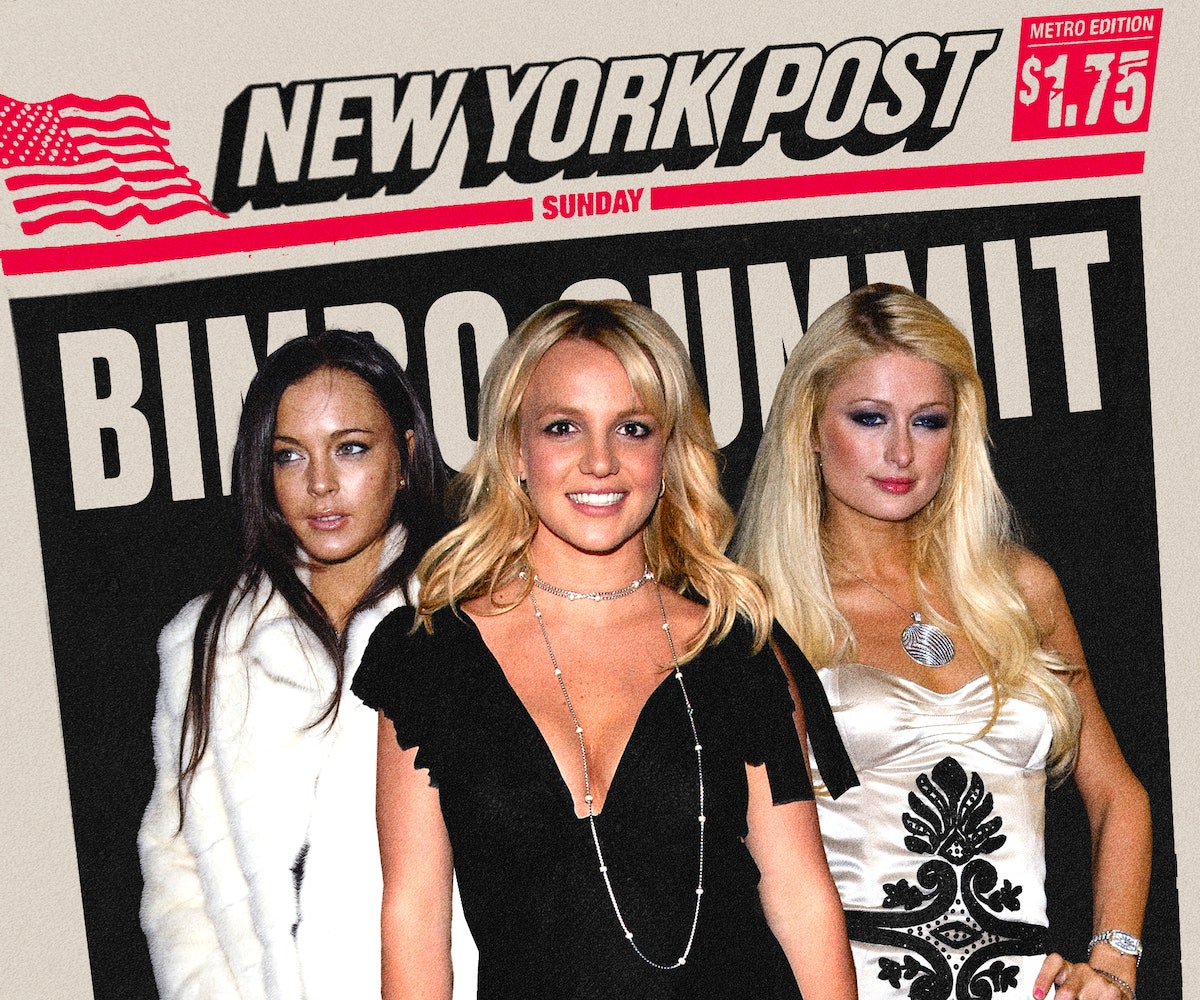 On Nov. 29, 2006, the New York Post ran its front page with the sleazy paparazzi photo of Hollywood’s most controversial “it” girls — Paris Hilton, Britney Spears, and Lindsay Lohan. The posse was caught just hours before dawn, crammed in the front seat of Hilton’s Mercedes-Benz SLR McLaren looking reckless and thoroughly unbothered after partaking in the gaudy hubbub of high-class Los Angeles nightlife. Accompanying the million-dollar shot was a biting headline written in bold and all-caps: “BIMBO SUMMIT.”

Like clockwork, the Post’s broadsheet cover spurred national speculation and incited public scorn against the three women. But the nasty angling was hardly anything new for the generation’s popular figures. The early 2000s were intertwined with an infatuation with young stardom, promulgated by 24/7 tabloid-splashed gossip. Everyone, from the newfound Twitter dwellers to ardent fans, leeched off of an ongoing feud between two former friends — Hilton and Lohan — along with their individual celebrity acquaintances-turned-pawns.

At the drama’s forefront was Hilton, who leveraged the public notoriety following a sex tape leak into stardom. After a seminal five-season run as a displaced socialite on The Simple Life alongside Nicole Richie, Hilton set trend cycles in motion — subsequently becoming the world’s first influencer — and utilized that fame toward catapulting a burgeoning music career with the launch of her debut studio album, Paris, and the release of her successful single “Stars Are Blind.” Lohan, whose childhood stardom catapulted her into starlet success story thanks to hits like The Parent Trap, Freaky Friday, and Mean Girls, was on her way to becoming an acting legend.

Instead, the famed friendship quickly turned into animosity that obliterated ambitions and endeavors. Lohan was slapped with the brutal moniker “fire crotch” after she was seen clubbing with Greek heir Stavros Niarchos III, Hilton’s on-and-off boyfriend, and it was enough to spark the flame for the decade’s greatest celebrity debacle. In one ostentatious moment, Lohan tried her hand at throwing vulgarities and took a jab at Hilton while exiting a late-night party at the Roosevelt Hotel. She called Hilton the C-word on camera before redacting her comment when paparazzi questioned her further. The disheveled duel also involved Hilton’s former flame — oil heir Brandon Davis — and her then-publicist Elliot Mintz. Spears, who was hailed as the “Princess of Pop” after her breakthrough entrance into the industry at the age of 17, was also strung along after she was touted as Hilton’s new bestie and main sidekick.

When the Post’s November cover photo began racking up headlines, the outright display was branded as a PR stunt to absolve Lohan’s image after her previous tirades against both Hilton and Spears. Hilton, however, was quick to counter those claims with tales about the night’s happenings. In the end, Lohan was branded as a mere imposter and a party crasher by Hilton. She allegedly wasn’t even invited to the Beverly Hills bungalow party both Hilton and Spears arrived from moments before the photo was clicked.

Paparazzi, media outlets, and internet commentators descended like vultures, eating up the ensuing gossip and voraciously anticipating the next stumble. Hilton, Lohan, and Spears’ personal plights became a national topic of interest — a type of spotlight that no amount of money could alleviate. Fast-forward a year, and all three stars were experiencing a different reality. Hilton served jail time for violating probation, Lohan checked into rehab, and Spears suffered several public mental breakdowns that paved the way for a strict conservatorship that strangled her personal liberties and her multimillion-dollar estate.

In 2006, society had yet to grasp the concept of empathy, allowing for a broken system that thrived off incessant exploitation to stay fueled. Today — 15 years later — Hilton, Lohan, and Spears have redefined the “bimbo” into a symbol of triumph. The once-infamous paparazzi photo, which aimed to maim reputations, has cemented itself as an iconic moment that fueled trailblazing narratives of both hope and redemption.

Hilton’s latest role is one of advocacy. On Oct. 20, she made an appearance on Capitol Hill to advocate for the Accountability for Congregate Care Act after suffering from years of congregate care facility abuse firsthand. (In her 2020 YouTube documentary, This Is Paris, Hilton opened up about the explicit abuses she experienced in a similar teen boarding facility.) As a natural innovator, Hilton has also been on the forefront of the NFT market and crypto, championing them as the future art. And to top it all off, Hilton also tied the knot with American author and entrepreneur Carter Reum.

Meanwhile, Lohan’s headlines are skewing positive; not only is she officially making her acting comeback with an upcoming Netflix holiday rom-com, but the star also announced her engagement to financier Bader Shammas. And after 13 years of being silenced, Spears is finally free from a conservatorship that plagued every aspect of her life — from her finances to her personal life and medical decisions. The tireless #FreeBritney movement returned the pop star’s stolen independence. And like her “Bimbo Summit” colleagues, Spears is also heading toward matrimony with longtime boyfriend, Sam Asghari.

“For me, success is a state of mind,” Spears said in an interview with Stylist magazine. “I feel like success isn’t about conquering something, it’s being happy with who you are.” Perhaps the sentiment also holds true for Hilton and Lohan, along with the Hollywood icons that are yet to come.