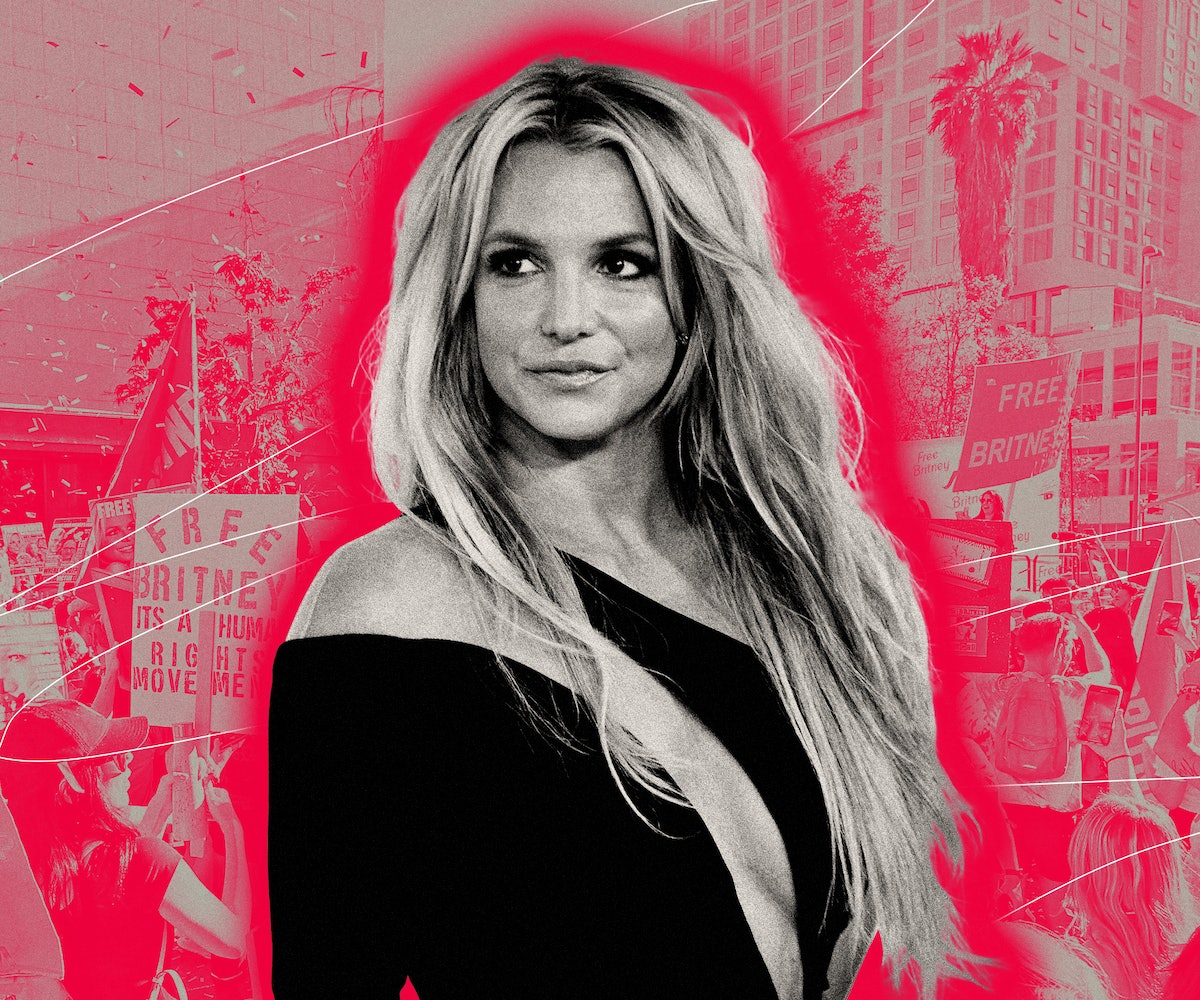 Outside a courthouse in Los Angeles on Nov. 12, confetti cannons, applause, and the jubilant cries of an adoring crowd marked the celebration of a moment in history: the emancipation of Britney Spears.

Inside, moments earlier, Judge Brenda Penny of the Los Angeles Superior Court announced the termination of the conservatorship of Britney Spears. “The conservatorship of the person and estate of Britney Jean Spears is no longer required,” she told the court, finally putting an end to the controversial and contentious legal arrangement that has controlled the pop icon’s life since 2008.

The ruling concludes an almost 14-year battle for Britney’s freedom after her father placed her under a conservatorship in 2008, which saw him gain control over everything from his daughter’s medical care and business dealings to whether she can drive a car on her own or even get married. The validity of the arrangement has always been questioned by fans, but in 2019 a series of events kick-started the #FreeBritney movement, a fan-led initiative that, along with dogged reporting and two documentaries by the New York Times, brought the alleged horrors of the situation to light. In fiery, candid, and emotional testimony given in June 2021, Britney spoke out against the conservatorship and the actions of her father, whom she claimed had spent over a decade relishing the control he exerted over his daughter’s life.

“I truly believe this conservatorship is abusive,” she said, alleging that under the conservatorship she had been forced to perform while sick, threatened into going on a world tour, drugged and checked into a mental health facility against her will, exploited for money, and prevented from having children because the conservatorship refused to allow her to remove her birth control.

“I’ve lied and told the whole world I’m OK and I’m happy,” she continued. “I thought if I said that enough maybe I might become happy because I’ve been in denial. I’ve been in shock. I am traumatized. But now I’m telling you the truth, OK? I’m not happy… I’m so angry it’s insane. And I’m depressed.”

Sharing an Instagram video of #FreeBritney protesters outside the courthouse on Nov. 12, Britney called it the “best day ever,” adding, “Good God, I love my fans so much it’s crazy! I think I’m going to cry the rest of the day.”

Echoing this sentiment, her lawyer, former federal prosecutor Mathew Rosengart, called it a “monumental day” for his client.

“What's next for Britney — and this is the first time we can say this in a decade — is up to one person: Britney,” he added. “Britney, as of today, is a free woman.”

Freedom and autonomy are themes that have long been part of Britney’s life. Since her debut album was released in 1998, the singer’s records have been littered with references to being underestimated, overprotected, misunderstood, and controlled by the powers that be. Songs like “Lucky,” “Piece of Me,” “Alien,” and even “Just Luv Me” from 2016’s album Glory, spoke of the malignant force of fame and her fears of isolation. Her cover of Bobby Brown’s “My Prerogative” even opened with an eerily prophetic monologue. Over rolling beats, Britney said, “People can take everything away from you, but they can never take away your truth. But the question is: Can you handle mine?”

The answer to that question remains unknown. Britney may have shared her brief testimony in court, but the full story of the conservatorship — how it was implemented and organized, the full scale of any alleged corruption, and the impact it had on its subject — has yet to emerge. While there are two more hearings scheduled that may unravel any financial wrongdoings, the decision to pursue any civil or criminal action or further investigate any wrongdoings by the conservators remains with Britney.

For Britney Spears, now is not the time for our expectations.

What’s inevitable is that the singer’s next moves will be monitored and reported on in detail. Already, TMZ has claimed that she wants to record another album, while her upcoming nuptials to fiance Sam Asghari will undoubtedly draw coverage by the media. For some fans, there’s also a desire for vindication: They want to see those who have allegedly wronged Britney pay for their crimes.

Ultimately, Britney’s future belongs to her. What’s important is that it remains that way. For her entire career, her life has been narrated for her by the media and then, later, controlled by those around her. The ever-present gaze of the public should remain averted unless she calls for it. For Britney Spears, now is not the time for our expectations.

Rather, the termination of the conservatorship should act as a time of reflection. As a fan, I have spent the last few years reckoning with my own complicity in maintaining the status quo. I bought merch and albums and went to concerts, including the 2018 world tour that Britney said she was threatened into doing. I had always been aware of the conservatorship and often been critical of the control her father wielded, yet I never stood back and took stock of the situation. Instead, I prioritized the pleasure that being a Britney fan brought me, turning a blind eye to the realities of the person whose art has defined my life.

Writing in her newsletter about this very topic, the pop culture critic Grace Medford said, “You can’t know what you can’t know.” Indeed, for a decade Britney’s father, management, and publicity team presented Britney alongside an image of fragility. Access to the singer was carefully managed by those involved in the conservatorship, as were interviews, TV appearances, performances, and public appearances. Rumors and tabloid stories constantly circulated about her mental well-being, with the conservatorship often cited as a good thing that was responsible for setting Britney’s life back on course after a tumultuous time.

Evidence of this delicate state was compounded by those rare moments when she did appear in public. Her live performances, once electric, seemed to lack vigor and enthusiasm. Interviews were also awkward, often revolving around games or basic pre-approved questions about fitness, her relationship with her children, or her colorful Instagram account. Even her live shows kept audience interaction to a minimum. Taken together, it painted a portrait of a troubled star who was still in need of the fortress that surrounded her, and the public, for the most part, accepted it.

We now know we were being gaslit. According to court documents, interviews with those involved, and Britney’s own explosive testimony, it’s become apparent that this carefully crafted image and the legal arrangement it supposedly justified were a smokescreen. The full details of what occurred over the last 13 years are as yet unknown, but it’s hard not to question every aspect of the past decade of Britney’s career. Since 2008, what has she actually wanted to do?

Despite everything, I believe Britney still loves what she does. It’s something that she herself has repeatedly said during those rare moments we’ve heard from her directly over the past decade. What we don’t know is whether, artistically, she was always steering the ship. Alongside career highlights like 2016’s quirky Glory and the innovative Femme Fatale were 2013’s less than brilliant Britney Jean, which arrived with allegations that Britney wasn’t actually singing on some of the songs, and the derivative Iggy Azalea collaboration, “Pretty Girls.” The conservatorship stole so much from her ­— did it strip her of her artistry, too?

Only Britney knows the truth; it’s hers to share should she choose to. But perhaps the music from that era of her life should be laced with some discomfort. While I can only speak for myself, listening now is a prickly reminder of all the years I prioritized my own enjoyment of Britney the pop star over the wellbeing of Britney the person.

Throughout her career, Britney has unwillingly been charged with holding the expectations, desires, indignities, and humiliations of society itself. “She acts as a distorted mirror, allowing public and press alike to scrutinize their own reflection,” writes academic and historian Jennifer Otter Bickerdike in her book Being Britney: Pieces of a Modern Icon. “By picking apart someone seemingly familiar, we are not forced to look at our own fundamental wrongs. ... Britney is, in many ways, just a cultural vessel for our own projections.”

With the termination of the conservatorship, this burden should also come to an end. Instead, now is a time for personal accountability for the role we all played in what happened to her life, as well as a recalibration of how Western society values, consumes, and engages with the concept of celebrity. What does it mean to be a fan if your participation in fandom can actively harm the subject of your adoration? How does our voracious appetite for pop culture affect those who are creating it? How does society’s consumption of culture and art as a product contribute to the dehumanization of the artist themselves? What harm are we willing to ignore in order to remain entertained?

I don’t know the answer to these questions, and it’s not Britney’s job to give us solutions. Whether she decides to release new music, release a tell-all memoir, or retire to a ranch in Pasadena to have lots of babies, after 13 years under the oppressive confines of the conservatorship and over two decades of scrutiny in the public eye, Britney Spears still owes the world nothing. “I deserve to have a life,” she told the court in June. The only thing we can do now is allow her to live it in peace.

“I’m stronger than yesterday, now it's nothing but my way,” she once proclaimed on the chorus of “Stronger.” Twenty-one years later, that may finally be the truth.