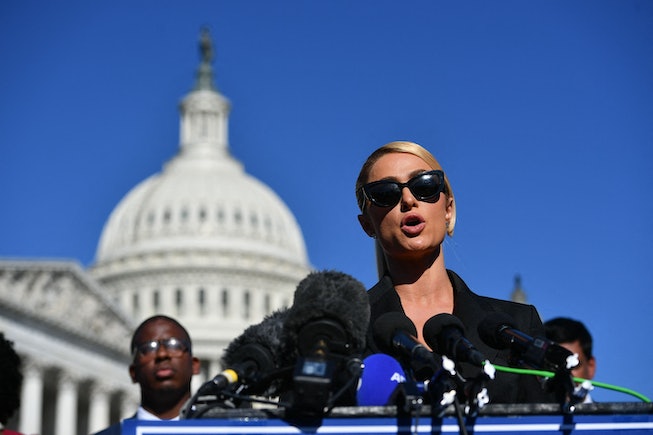 Hilton is helping lawmakers craft the first “Bill of Rights” for children and teenagers in congregate care facilities, which would protect the emotional and physical rights of youth placed in facilities as part of what’s commonly referred to as the “troubled teen industry.” Hilton has long been an advocate for the rights of teens in care facilities, which include therapeutic boarding schools, military-style boot camps, juvenile justice facilities, and behavior modification programs.

Earlier this year, she testified on behalf of a Utah bill that reforms troubled teen institutions, and shared her chilling experiences at the Provo Canyon School, a psychiatric youth residential treatment center, and her experiences in the centers were a large part of her 2020 documentary This Is Paris.

“Today I come here not as Paris, but as a survivor,” she said at the press conference October 20. “For 20 years I couldn’t sleep at night, as memories of physical v*olence, feeling of loneliness, the loss of years rushed through my mind when I shut my eyes.” She continued: “I was sent to four facilities over a two-year period, and my experience at each one haunts me to this day.” She added: “Every day in America, children in congregate care facilities are being physically, sexually and emotionally abused,” and blamed it on a “systemwide lack of transparency and accountability.”

Hilton shared chilling details of her experiences in four different facilities over two years, saying she was strangled, thrown into solitary confinement, forced to stay indoors for 11 months straight, and forced to take medication without having a diagnosis.

This bipartisan socialite and entrepreneur also penned an opinion piece this week for the Washington Post, where she explained how she was awoken by two men with handcuffs one night when she was 16 year old, who asked if she wanted to go “the easy way or the hard way,” before forcibly taking her from her home to a residential care facility.

“Ensuring that children, including at-risk children, are safe from institutional abuse, neglect and coercion isn’t a Republican or Democratic issue — it’s a basic human rights issue that requires immediate action,” she wrote. Paris for office?