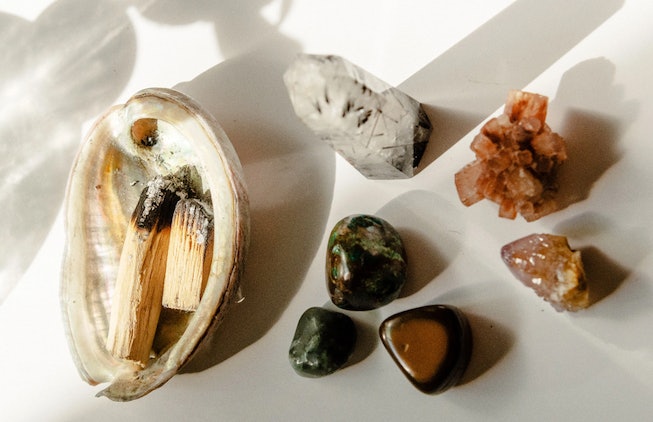 Like humans, crystals carry energy. This energy varies by stone, but it’s why they are thought to hold properties that can be used for mental, physical, and spiritual healing. These powerful (and pretty) little rocks make wonderful additions to any self-care, manifestation, or protection ritual, but sometimes, the crystals themselves need a little care as well. There are a number of ways to cleanse your crystals, and you should find the method that best suits your needs. One of the most popular techniques? Wafting those stones in some spiritual smoke. While it’s pretty simple, it’s important to know how to cleanse crystals with incense properly to get your gems firing on all cylinders for your highest benefit.

When you first start using a fresh crystal that’s been charged, cleansed, and activated, it feels vivacious and ready to serve. But just as people get bogged down after a certain point of putting in hard work, so too do your crystals. They get tired and need to hit the refresh button. “Cleansing your crystals is kind of the same concept as why we as humans shower or take baths every day,” says Breana Fernandez, House of Intuition crystal expert. “It's a way to release any energetic build-up and make way for fresh, new energy to enter into your aura.”

Why To Cleanse Your Crystals

Cleansing your crystals is an essential part of the crystal healing process. If you bought a new phone, you’d use it for a while, but then you’d eventually need to charge it in order to continue benefiting from its full capabilities. Cleansing your crystals is similar — it rejuvenates the stone’s healing properties and purifies it of any unwanted negative energy so you can reap its full benefits.

Your stones are constantly absorbing the energy of their surroundings, which isn’t always going to be aligned with your intentions and won’t always be positive. Anyone who comes into contact with your crystals could be instilling all kinds of unknown vibes into them, which is why Jessica Troupe, founder and owner of Heritage Apothecary, recommends bringing your crystals back to their original energetic state via cleansing. “You want to be able to infuse your own intentions for the crystal,” she tells NYLON. “By cleansing it with incense smoke, you're able to do that.” She recommends cleansing any new crystals before integrating them into your rituals, as there’s really no way of knowing how or by whom they were handled before they got to you.

As Madison Young, owner of Open Eye Crystals and the Ace of Cups club, previously told NYLON, overworking your crystals without nourishing them can have adverse effects. “You'll find that if you don't clear your crystals, they will feel a little more lackluster, a little dull,” she said, adding, “sometimes you'll find that you lose the stone or the stone will just break if it's just taking on too much energy.”

To keep your crystals happy and teeming with vitality, cleansing them regularly is a must. While you don’t need to do this with incense smoke — you can alternatively cleanse with things like water, salt, other crystals, or even intention alone — Troupe says smoke is one of the safer physical methods of cleansing. “You're not putting it in water, you're not putting it in salt or doing something that literally might work against the stone that you're using,” she tells NYLON. Because crystals are made of various minerals, they can have different interactions with certain elements, which is why some crystals are not recommended for things like water or salt. Take salt-based crystal selenite, for example. “When you put that in water for an extended period of time, it's literally just going to disintegrate and you're not going to have a crystal anymore,” Troupe explains.

If memorizing which crystals are OK to put where sounds like too much of headache, smoke cleansing is a safe bet that won’t damage your precious stones. Below, learn how to cleanse crystals with incense, as recommended by the experts.

Like crystals, incense also carry their own healing and cleansing properties. Essentially, you can use the properties of one to revitalize those of the other. Again, the smoke is not mandatory to cleanse your crystals and set intentions, because literally you are the tool,” notes Troupe, adding that you can simply hold your crystal and set your intention. “But using incense or some sort of herb or botanical is just ... a way to elevate, intensify, or magnify [your intention],” she expands.

Of course, there are tons of different types of incense, and their specific benefits depends on the scents and resins they are made from. According to Fernandez, they will all cleanse, but each will carry a different sort of added intention. You can then match that purpose with a corresponding incense to amplify your goals. “If [the incense] is made from copal or some sort of resin, there is already a purpose aligned with that resin or the palo santo or sage [or] whatever botanical you're using,” Troupe tells NYLON.

For example, if you want to hit the reset to purify and clear all energy — both positive and negative — Troupe recommends grabbing some sage. Then, if you want to add in your positive intentions, she says to reach for palo santo. Or, as Fernandez suggests, use dragon’s blood incense for protection and goal amplification, or white copal for cleansing and connection.

How To Cleanse Crystals With Incense

As with anything in energy work, intention is everything, Fernandez tells NYLON. First, get into a tranquil state — whether you need to meditate beforehand, or do some breath exercises to clear your mind of all other worries and responsibilities. Get comfortable and be sure you’re not going to be disturbed as you use your incense to cleanse your crystals.

“The way that you would use it is by lighting up an incense stick,” Fernandez says. “Once you start to see that continuous flow of smoke, you would blow out your incense and pass each crystal through the smoke, because all you really need is your intention and the smoke to cleanse.”

Essentially what you’re doing is creating what Troupe calls a “smoke bath” for your crystal while focusing on your goal. “You’re going to waft the smoke over the crystal,” she explains. “As the smoke is surrounding the crystal, you're going to speak your intention for that crystal.” Ask your stone to accomplish whatever it is you want to accomplish, what you’re trying to manifest, or whatever energy you’re trying to call into your life and your space, Troupe says. That could just be you intending on setting a clean slate for energy and positivity, or you can get specific with what you want to activate using your crystal. “You can do that as you're clearing and cleansing the crystal with the smoke,” she adds. Focus on the feeling of gratitude and positivity as you set your objective and you’ll have a cleansed crystal ready to go to work for your highest good.

How Often To Clean Your Crystals

There’s no hard and fast rule on how often you should cleanse your crystals. It’s best to rely on your own intuition for when to do so, according to Troupe. “As you work with the crystal more, you'll become more in tune with when it needs to be cleansed,” she tells NYLON, highlighting that crystals should definitely be cleansed when you first get them.

If you’re new to crystals and their upkeep, Troupe recommends creating a ritual around cleansing them every so often within a time period of your choosing. “But if something happens that's kind of out of the norm, then you probably want to cleanse or clear your crystal,” she adds. Some people will cleanse their crystals anytime someone touches them, but in general, Troupe recommends cleansing if anything happens around your stone that makes you feel off. Additionally, when you want to set your crystal for a new purpose, you’ll want to cleanse it then as well.

Many crystal users sync their cleansing routines with the moon, according to Fernandez. “A lot of people like to use the full moon and new moon cycles to cleanse their crystals,” she tells NYLON. “I do like to remind people that it's important to remember that each cycle carries a different vibration and a different type of energy, so it's important to remember those intentions.” But again, how and when you decide to use incense on your stones is ultimately up to you and what feels right.

Learning how to cleanse crystals with incense is an easy addition to your healing rituals that will make a world of difference in your stones’ power and effectiveness. Sometimes crystals just need a little TLC, too.

NEXT UP
Astrology
Your February 2023 Horoscope Is A Breath Of Fresh Air
Astrology
February 2023’s Full Snow Moon in Leo Embraces The Real You
Astrology
How to Use Astrology to Access Past Lives
Beauty
11 Aquarius-Inspired Nail Art Ideas For the Unpredictable Season
Style + Culture, delivered straight to your inbox.