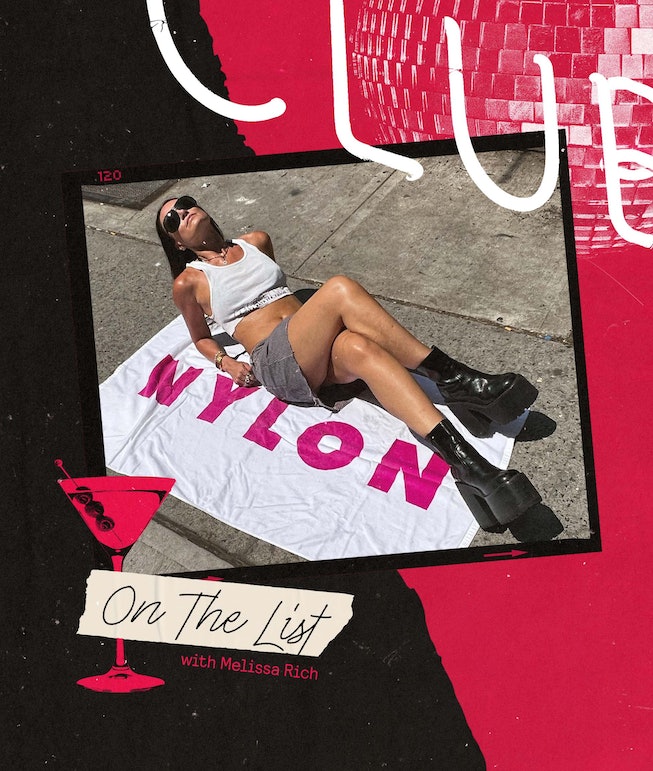 Welcome to On The List (With Melissa Rich), NYLON’S column with comedian Melissa Rich, here to illuminate the state of nightlife, one party at a time.

Partying abroad takes skill. From overcoming constant language barriers and diversions, like the hotel concierge’s bad recommendations, to actually finding a good spot, an international party girl is met with what can feel like nonstop hurdles. There’s the logistics: transportation, having cash, understanding time zones and military time, both of which require using math, art, and science. A few of my friends, professional party girls, themselves, awaited in suspense at their Airbnb for a party they found on Reddit. They were chasing the infamous outskirt raves of Paris, pre-gaming and fighting their jet lag to make it to midnight, only to arrive at the end of the rave, as it had started at 12 p.m., not 00:00 a.m. An easy French mistake!

While the cliché party scenes of Europe are generally a foolproof good time (in the words of Bethenny Frankel on Mykonos, “If you like going to Vegas on New Year’s Eve… this is a place for you…”), nightlife outside of these spheres gets very exciting. Opting out of the conventional, cookie-cutter experience leaves room for some intrigue. Even more challenging? Doing it alone. On my recent mostly-Euro tour, in between friends’ departures and arrivals, I had a few solo nights to really emphasize being the main character. There’s a natural discomfort of going out by yourself. Do you dance? Approach someone? Chain-smoke cigarettes? What do you do while watching your drinks and doing a crucial scan for demons? (Be alert! This is not the story of an elite squad called the Special Victims Unit. This is fun!)

Everyone has been sleeping on Athens. For its ancient roots, it also boasts a quickly expanding art scene; there’s really nothing better for nightlife. I started my first solo night at a tiny club in the city’s Monastiraki neighborhood, where the music plays through the windows and the party spills into the street. My friend named George recommended it, as nearly everyone in Greece is named George. This bar had everything: techno, stray dogs, a local man falling asleep in a chair, half of Berlin, a bathroom with no locks, Apple Pay, a group of Canadians talking to me about the dark web, Campari. I could have stayed forever, but I’d been there three times and felt the call to explore.

I walked to another techno spot and immediately hated it. The energy was darker and the people seemed shady. I left a full beer with no regrets and reverted to my always reliable Plan B: Googling “gay bar near me.” I reached my new locale, assuming I’d be swimming in jock straps and dodging monkeypox like much of my nights in New York, but was shocked to my core to walk into a bar filled with… lesbians! An incredible surprise, considering the elusive scene back home. The music was great — a mix of pop, house, and Greek — and everyone was throwing bar napkins in the air like confetti. I danced and chatted and eventually left on the back of a motobike, giving bisexual Lizzie McGuire.

“I left a full beer with no regrets and reverted to my always reliable Plan B: Googling ‘gay bar near me.’”

A few days later, I went to the remote island of Poros for the real Mamma Mia experience. My Airbnb was up approximately 1 million white stairs that wound up a hill to give me an incredible view and more cardio than I’d intended. Poros is not a party island — I was allegedly there to “relax” — however, it’s a big port for yachts and I don’t know how to relax. I assumed that there would be five to 10 shipping heirs fighting over who got to take me on their boat, however, the reality of the yacht community was mostly Swedish families wearing J. Crew and unfriendly American couples enjoying their retirement years. As the ancient party girl proverb goes, it was simply “not the vibe.”

There was a small stretch of tiny clubs playing house music. While I wish I was the girl who easily finds rich shipping heirs, or at least non-annoying tech bros, I’ll happily settle for my expertise in befriending fun bartenders. In this case, a German woman and a Greek man, the owners of the club and a couple who just moved here from Berlin, I learned from the girlfriend who was living her own Greek rom-com.

“Like the movie with Julia Roberts and Richard… ah…”

I sat drinking Campari sodas with a water taxi driver who charmed me within seconds, giving absolute Señor Cienfuegos (Andy Garcia in Here We Go Again). I asked about a beach club I’d heard about on the other side of the island. Venturing there would be a risk; there were no taxis, no streetlights, and bad phone reception. I was already stressed about getting up the stairs with my spotty Google Maps and iPhone flashlight, as I had the night before, with spooky stray cats and old women on their balconies saying something haunting in Greek at every turn. The club was closed but my new friends had a party to take me to. Their friends had opened a club in the city across the water, Galatas. We’d take the water taxi over when they closed the bar. I debated for a moment and thought, “Well, I can’t not…”

We walked into a full party around 2:30 a.m. playing the song of Greek Summer, Ximeromata. Suddenly, my shoes are off and I do two shots in a row of Tsipouro, which reads to me as Greek tequila, and make some friends who don’t speak English. I’m having a ball, but the German couple is fighting (in a hot way) and wants to leave. I can tell they feel conflicted about leaving me, their solo, and now drunk, guest. “Macarena'' comes on and everyone loses it. There was no chance of me leaving! The water taxi driver appears and says he’ll take me back on the boat. Was this wise? Debatable. But life is short. The world is wide. I want to make some memories (another Mamma Mia reference, for those who haven’t experienced joy…). While I loved and trusted Cienfuegos, cut to 6:30 a.m. and he quickly walks out the door. I half-heartedly run after him as he gets in his car and takes off. I wail. Yet another kind couple sees my drunken distress and gives me a ride to the water taxi. By the grace of Donna Sheridan’s ghost, I catch the last one of the “night” and show up to the island in full daylight.

Can I recommend this particular adventure in good faith? Probably not. But solo nightlife trailblazing can be the most stimulating way to travel — and staying out until sunrise really was the easiest way to climb the stairs.

NEXT UP
Ask A Witch
Ask A Witch: How To Survive The Holidays With Hoodoo Magic
Culture
The White Lotus Will Return For A Third Season
Culture
In Cann’s Holiday Campaign, The Greatest Gift Is Being Chill
Culture
Simona Tabasco Is the Lifeblood of The White Lotus