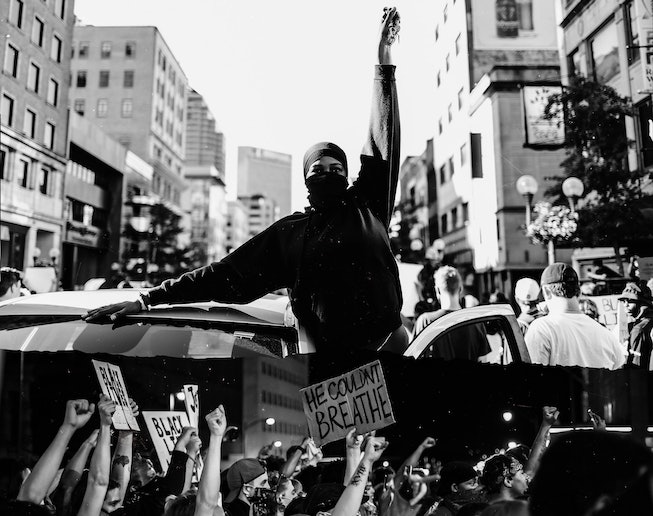 As media outlets continued to debate the ethics of publishing graphic visuals of killings by police this week, freelance photographers from around the country took to the frontlines of numerous protests in solidarity with Minneapolis. On May 25, unarmed Black citizen George Floyd was killed by asphyxiation by a police officer who knelt on Floyd’s neck as he took his last breaths. The disturbing incident was captured via smartphone, soon going viral and rousing uprisings in various cities.

On-going protests have been held in cities across the world. In the Columbus, Ohio downtown area, photographers gathered to the scene with the intention of documenting history in the making — some even physically encountering the Columbus Police Department. “The experience was surreal," photographer Tyler Armstrong said. "I witnessed a group of peaceful protesters attacked by police with mace, flash bangs, and rubber bullets. In several instances, I was hit with mace and tear gas — something I never experienced before."

The Columbus protests began late last week, reaching a boiling point as rioters stormed the city’s statehouse and ransacked a number of downtown businesses. As Columbus Mayor Andrew Ginther announced a citywide curfew on Saturday, the Ohio National Guard was called, along with the Columbus Police Department facing the brunt of tensions as they violently restrained protestors. Earlier that day, Ohio congresswoman Democratic Rep. Joyce Beatty was pepper-sprayed while talking with protesters as Columbus City Council President Shannon Hardin escorted Beatty away from the scene.

The uprising in Columbus was arguably long-anticipated — in 2017, the Columbus Police Department was ranked number one in the killings of Black people. The CPD has long been viewed as being excessive with force, especially towards Black residents, with a history of unprovoked violence causing a strain between Columbus residents and the police.

Their violent tactics have also been manipulative, especially in light of the murder of 16-year-old Julius Tate in December 2018. Tate — who would have turned 18 on May 29 — was killed during a CPD sting operation. His death led to his girlfriend, Masonique Sanders, being given a three-year juvenile sentence in conjunction with Tate’s murder, taking the fall for a murder that the CPD committed.

As Floyd, Ahmaud Arbery, and Breonna Taylor, among other unarmed Black citizens, were unlawfully murdered by the police in the first few months of this year, Columbus protestors have assumed solidarity with those affected by police brutality nationwide. The rage the city has experienced over the past decade alone — from the death by suicide of Black activists MarShawn McCarrel and Amber Evans, to the #BlackPride4 arrests, the murder-kidnapping of sex worker Donna Dalton and the numerous killings of Black residents — has been traumatic.

Still, the distress of the recent protests was necessary to have documented in unity with the Black Lives Matter Movement. In order to evoke emotion from viewers, photographers sought fitting angles for capturing, whether that meant climbing trees or standing atop of architectural landscapes. Rather than focusing specifically on editing style, photographers can shoot precisely based on the message they seek to convey. As protests are generally rapid-paced, it can be challenging to ask subjects for consent to capture, especially as facial recognition technology becomes a prominent method for identification. Some have even resorted to screenshotting pictures rather than posting the original picture to avoid subjects being geotagged.

“I try to capture exactly what’s in the moment without staging the shot, I keep my shots as authentic as possible,” said photographer Diamoni Davis-Ferguson. “When it comes to shooting during protests, I’m more so looking to capture moments that I feel tell the story of what took place. I keep the edits simple because I like to show exactly what was captured with the least amount of alterations.”

"When it comes to protesting, the story lies within who was there, who was on what side, and what they were doing for the cause."

Rather than censoring or blurring the faces of protestors to protect their identities — considered a crucial act by some, as protestors , some photographers refrain from asking subjects for consent, as other forms of media don’t use the same practices. “When the news is out there reporting, they don’t ask for consent to put us on live TV. When you're at the protest, everyone understands that there are a lot of photographers out there taking pictures,” says photographer Malik Moman. “If we blur out the faces of the people, it will take away from the feeling and the emotion going on during this time in history.”

In the midst of protests, the COVID-19 virus is still widespread. As additional protection from the virus, many protesters are using masks, which also makes them less likely to be at risk of being identified. “Most people are wearing masks for both health and anonymity reasons so it makes it a bit easier to capture without worrying about putting anyone in danger,” said David Mason III, photographer and one-half of music production duo The Dreamcatchers. “I have a few images that I published that have individuals' faces on them and they were asked for consent.”

With an eagerness to get as close as possible to the heart of protests, photographers assume the role of documentarians, even as they’re placed in dangerous positions. The violent use of flash bombs and pepper spray by law enforcement hasn't been limited to targeting only protestors. “I tried following with my camera in front of my face so it was obvious I was there strictly to take photos, but I was stopped and threatened with a tear gas gun pointed inches from my eyes,” said photographer Julie Jackson, who comes from a family of police officers. “I started hearing and seeing glass shattering down both sides of the street. It was heartbreaking, but I just kept my face behind my camera because I knew that the photos were more important than my reaction to the destruction of my own city.”

While capturing protests might be viewed as a simple act, photographers have to remain seemingly objective, in spite of covering controversial events. Protest photography can be not only a physical and time commitment, but an emotional one, as well.

“There is a responsibility as a photographer to tell the story. When it comes to protesting, the story lies within who was there, who was on what side, and what they were doing for the cause,” said Jackson. “I'll always be looking for implied or verbal consent [from protestors], but again, photography by nature is purely documentary. The story has to be told.”

NEXT UP
Life
What Is DALL·E? The AI Machine Creating Instant Surrealist Art
Life
A Breakdown of Ezra Miller’s Run-ins With the Law
Life
Facebook Is Desperate To Be More Like TikTok
Entertainment
NCT Teams Up With Sanrio For Their Next Merch Launch