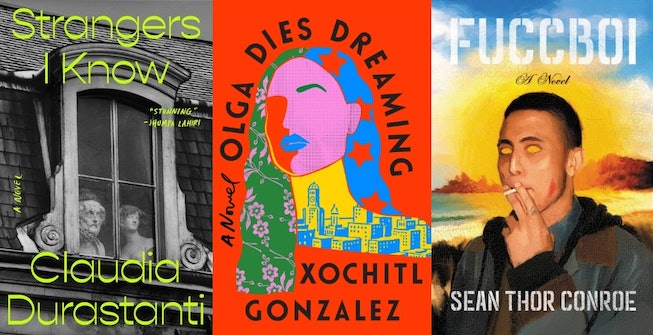 People always say they want to read more in the new year. It’s a laudable goal: Books gifted during the holidays start to stack up, while lists about what to read in the New Year abound. We all want to spend a little less time on our phones and get a little less dumb. It’s can be overwhelming! Thankfully, it’s cold. And with recent closures, canceled flights, and other various mayhem, it’s a good a time as any to escape from the world a little bit.

To help you with all of these goals, we’ve got a list of next month’s book releases we’re most excited about. If you want to revel in the beauty and complications of youth, we’ve got Brown Girls by Daphne Palasi Andreades, a novel about Mariah Carey-loving tweens running amok in Queens. Or if you want equal parts laugh and cry, there’s High-Risk Homosexual by Edgar Gomez, the coming-of-age queer memoir that has two wild virginity-losing stories. Or to cleanse your aura of past year’s dating life (and hopefully not conjure any more clowns), check out Fuccboi by Sean Thor Conroe, a novel about a failed SoundCloud rapper and weed farmer who’s back in his college city to write, work for Postmates, and hook up with a long roster of girls.

Read on for 11 of the books coming out in January 22 that we’re excited to add to our reading lists.

This debut novel is a love letter to a group of friends and immigrant families from Queens. Andreades writes about the soundscape of growing up in New York City: “If you really want to know, we are the color of 7-Eleven root beer,” she writes. “Dark as 7 p.m. dusk, when our mothers switch on lights in empty rooms. Exclaim, Oh! There you are.” Of course, they’re teens, so they also belt Mariah Carey and roam the streets while pining over crushes.

This novel captures the ever-so complicated intensity of those female friendships that feel more like soulmates — from teens running though seedy L.A. bars through adult life in California and New York, Fiona and Jane are two women who deal with a lot of s*** that comes with life: opportunistic partners, parent’s sudden death, etc. Their friendship is strained by it all but they always have a home in each other (*sobbing*) in this intimate, raw portrait of friendship.

This dystopian novel is about a mother who makes a mistake and then faces the consequences: Government officials have to determine if she’s a candidate for a Big Brother-like institution that measures the success or failure of a mother’s devotion. It’s about Big Things like state violence, family separation, so-called “perfect parenting,” and the unrealistic demands of motherhood, with a little sci-fi fun!

We know you shouldn’t judge a book by its cover, but everyone does, so who cares — look at that stunning cover! In this debut novel, a wedding planner for the wealthy and her congressman brother in Brooklyn deal with ambitions, their Puerto Rican roots, family secrets (dun dun dun!) and their absent mother in the wake of Hurricane Maria.

This gorgeous and hilarious queer coming-of-age memoir from Edgar Gomez has it all: cockfighting, amateur strip shows, and two absolutely bananas stories about losing your virginity — but at its heart, it’s about the sense of belonging and love for a community, and a deep joy for not just being able to dance at the club, but for having someone to smoke cigarettes outside with you when you get kicked out.

Chad Kultgen and Lizzy Pace don’t see The Bachelor as a reality show; they see it as a competitive sport that has as tight — and problematic — a grip on the nation as NFL. The duo watched every episode ever made of The Bachelor last summer to prepare their thesis: a book that goes into strategies for how to out-manipulate the game that’s trying to exploit them.

Praised by ballsy writers like Tommy Orange and Nico Walker, Fuccboi is a debut coming-of-age (but probably not in the traditional sense!) novel about hypocrisy and self-awareness, told through the story of Sean, a f***boy failed SoundCloud rapper and weed farmer who’s back in his college city to write, work for Postmates, hook up with a rotation of girls, and avoid responsibility.

Praised by Torrey Peters and Roxane Gay, this book of stories follows queer and genderqueer characters in the South, ranging from warm to the uncanny. In one story, a trans women purchases a pregnancy bump. In another, a young trans person brings home a replacement daughter for their elderly father. And in another, a young Virginian flees their relationship to pursue an intersex person from Colonial-era Jamestown.

John Darnielle, lead singer of The Mountain Goats, has written a novel and we’re already predicting an HBO miniseries adaptation. It’s about a down-on-his-luck crime writer who is offered the chance to move into a house where a pair of notorious murders accured in 1980s Satanic Panicked California took place. But his research leads him back into his own work and the core of what he does and who he is. Thrilling!

Claudia’s parents either met when her mother stopped her father from jumping off a bridge — or when he saved her from an attempted robbery. They can’t agree, and they can’t even really explain it to their daughter because they’re both deaf and never taught her and her brother sign language. Eventually, books, punk rock and a tumultuous relationship help show her who she is and a way to exist in her chaotic world.