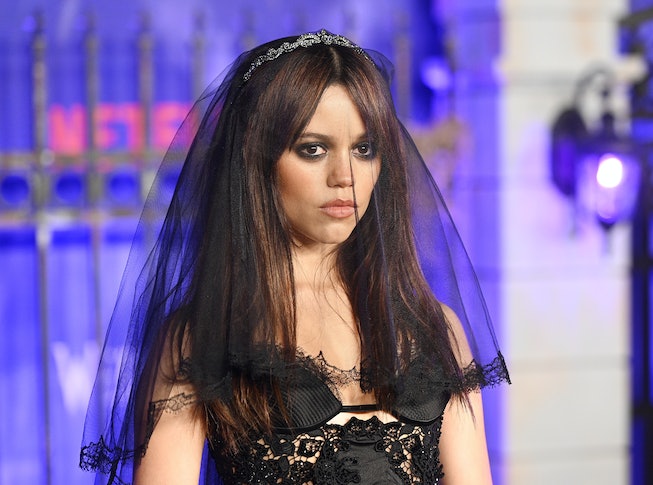 Jenna Ortega is a scream queen for a new generation, a reputation she’s garnered after roles in the Scream reboot and A24’s slasher X. Now, she’s solidifying her horror stardom with her role of Wednesday Adams in the Tim Burton-directed Adams Family spinoff Wednesday which premieres, fittingly, on Wednesday on Netflix. The star is leaning into her penchant for the macabre, volunteering information that might go from charmingly dark to disturbing.

The question didn’t exactly come up, so much as Ortega boldly volunteered her childhood hobby while answering a question about her friendship with Maddie Ziegler. Ortega said she and her costar from The Fallout are “the same person in different fonts,” (gonna steal that) and that they are weird in different ways. Spoiler alert: Only one of their ways includes lizard guts.

“I’m a weirdo,” she said in the interview. And she’s not talking about being a weirdo in the way that beautiful girls love to pretend things like eating peanut butter on Saltines is weird. “[I] used to perform autopsies on little animals when I was younger. Like, little lizards that I found that were dead in my backyard.”

Um...at least the lizards were already dead? We get it, it’s hard to carve a niche in Hollywood. Ortega’s PR team is undoubtedly working overtime to solidify her reign over all things creepy. Plus, filling in Wednesday’s macabre shoes is a big deal for a rising star.

“I think it’s the scariest role I’ve ever done because I’ve never played such a character before,” Ortega said to NYLON at the top of the year. “She’s iconic and extremely cherished and valuable in the horror community. I really, really want to do her justice, but I also want her to be something new.”

Overall, it’s not surprising that she doubled down on her fascination with horror in an interview with Olivia Rodrigo for The Face magazine. When asked what draws Ortega towards darker projects, she responded: “There’s some invisible string that’s connected to serial killers, monsters, creatures, and myself,” she said. “No matter where I go. I feel like it’s something that’s always been attractive to me since I was younger, something I was always into. It’s what feels right to me and it tends to be the scripts I’m into. I love things that are a bit off-putting, things when the closer you look, really aren’t that pretty. I love things that are disturbing.”

Listen to Ortega’s lizard autopsy tales in her Wired interview, below.

NEXT UP
Culture
The White Lotus Will Return For A Third Season
Culture
Remember When Gossip Girl Made The Quintessential Thanksgiving Episode?
NYLON Nineteen
Kosar Ali Is A Met Gala Aficionado
Culture
Simona Tabasco Is the Lifeblood of The White Lotus