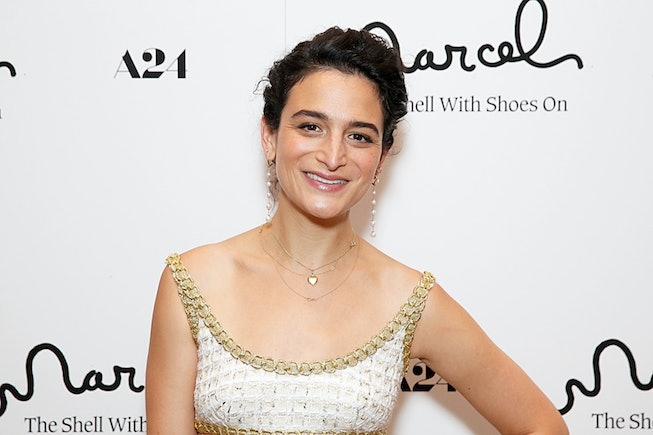 Jenny Slate is no stranger to taking on an unforgettable comedic role. She's played the spoiled and petulant Mona-Lisa Saperstein in Parks and Recreation; a rancid airhead in the Kroll Show sketch “PubLIZity;” and Bob’s Burgers’ resident valley girl, Tammy. But the one closest to her comes straight from her voice, and her heart: a tiny, curious seashell named Marcel, the titular character in the 2010 YouTube stop-motion sensation "Marcel the Shell with Shoes On."

Marcel, with his stumbling, nasally voice and gentle observations, has come a long way since his YouTube debut. Slate, along with her former husband, director Dean Fleischer-Camp, resurrected the seashell for their latest feature, A24's Marcel the Shell with Shoes On. The largely improvised film, which also stars Isabella Rossellini as Marcel's grandmother, Nana Connie, give the anthropomorphized shell a touching backstory. Marcel and Nana Connie live alone in a human-sized Los Angeles home, but that wasn't always the case. The previous tenants, a quarreling couple, ended things on bad terms — and in the breakup, all of Marcel's sock drawer-dwelling extended family was packed and moved away in haste. The home becomes an AirBnB, and the interim residence of an aspiring filmmaker named Dean (played by Fleischer-Camp himself), who meets and befriends Marcel, making him the subject of a documentary.

The film is tender, moving, and curious — everything Slate is searching for in the world.

Ahead, Slate talks about adapting Marcel's story for the big screen, motherhood, and working with a legend like Rossellini.

I remember the era of the internet when Marcel the Shell hit YouTube, and it was really sweet to see that come to the big screen. How was the adaptation process for you?

There are so many different parts of it. It took seven years to make this movie. And the first few of those years was locking down the audio play, everything that is said in the film was created first. I think when you're trying to make a movie, when you're trying to tell people that you have this beautiful idea that at least you think is beautiful, at least for me at that time, I was just so excited to have the idea. I was just so excited to have this thing, but it felt so far away from being actually able to do it.

With making this film, it was returning with an open mind every time. Trying to remember everything that had been said before, keep the character consistent. I just found the process to be so worth my time. I want to do detailed work. I want to do work that in one way or another shows in a surprising way, what is happening in my own emotional existence and shows in an unexpected way what I think is beautiful. There is so much about what is beautiful that Dean and I agree on. It's really nice also that that agreement really helped. And that what you see in the film is apart from all the other stuff is two artistic, the two creators who do actually share something that they think is beautiful and they want to put out there and we had to carry it together all this way.

What’s the difference in the creative muscles that you're working when you're inhabiting Marcel versus a different type of comedy?

I think when I would perform on a TV show, especially if I didn't write the character, you're stepping into kind of like a suit in a way that other people have created and they're trusting you with presenting it the right way, and not letting it fall flat on its face. And I really like that. I think that is so, so, so fun. And a lot of that for me is while I want to show my talent, it's putting away a lot of myself. It's the only part of myself that I'm showing is that I'm capable of being this other thing. Whereas with Marcel, it was the first time that I really, as a comedian understood what I was trying to get to, which is a sort of kindness that I really need from other people.

Like Marcel's dearness, the way that he is both showing himself without showing himself off, the way that he's presenting himself in complex ways and the way that he is really funny while also being touching, that performance is also a request or a wish for how I'd like to be treated and what I'd like to see in my world. And I think Marcel’s an example of what I wish to be and as my own self, and he's an aspirational character for me. And so it's really, really different because whether or not you can see that on the screen, I involve so much of my own personal desire for experience and identity and connection in what is there. It's deeply important to me, but hopefully not so self serious sounding.

It seems like you're looking for a lot of tenderness in the world.

You've said that it's like he's an example of the types of connections that you want. What are you searching for?

I think I'm searching for consideration, nourishment, courtesy, security, and consistency in other people. These are the things that are so important to me in my relationships. Just, not just to know what to expect, but to in a non-spoiled way, expect to be treated with curiosity and with care.

I know that now that I have my daughter, I think a lot about the difference between care and control and that there really is a really big difference, but that they can be confused for each other. You can tell that Dean, the documentarian in the film, that he really cares about Marcel. But in order to make his movie good, he can't control him at all. But sometimes it's confusing to him about how far he should go to care for him. Do you really care for someone if from afar you're, "Man, I really care about this little guy," but when they need you to help them light their candle, you're kind of, you don't know if you will? It makes Marcel doubt whether or not he's cared for. And I just, I love how Marcel lays it out.

Has being a mom shifted the kind of projects that you're interested in making?

Generally, it's just made it that I don't want to be away from my daughter at all. I also don't want to disrupt her quality of life. She just really comes first. So it's a big decision to go back to a movie set if it means I have to be away. I did make a movie 10 weeks after I had Ida. I made the romantic comedy, I Want You Back. My husband really encouraged me to do the job because he knows me well and knows that I need to show that part of myself. Just like, I mean, in the Marcel movie, Nana Connie says, it's good for him. He needs to perform. I am the same way, I do need to perform.

I would think that maybe any person who's had a baby might relate to the questioning that comes up, which is how much of myself from before will come back or will it come back and be different? Will I be able to do my work properly? How will that be? And what are the logistics? And it was really important for me to go back to work and just show myself that I could do it. I am really one of these people that if I live it, I believe in it. And that's just that.

That's beautiful. I also saw that movie, and it had been such a long time since I had seen a romcom that I really enjoyed.

And Manny Jacinto is such a cutie, too.

And what a nice person as well. We lucked out.

Isabella Rossellini as Nana Connie is so major. What was it like working with her in this capacity, in this very unique film? I watched the bit on Late Night with Seth Meyers about how surreal it was ordering Postmates for her.

There was one day where she choked on a pepper flake. Just the things that flashed through my mind. It was so, so intense. But she was fine! Isabella is a really unpretentious person while also being just very regal. Inside and out, an example of an intelligent, elegant, curious person. And I like that. You know how they say that you'll be better at tennis if you play with someone who's better than you?

That's how I felt. I was, "Well, I just have to do the very best I can because I'm doing it with her.” And I think she brought out the best in me.