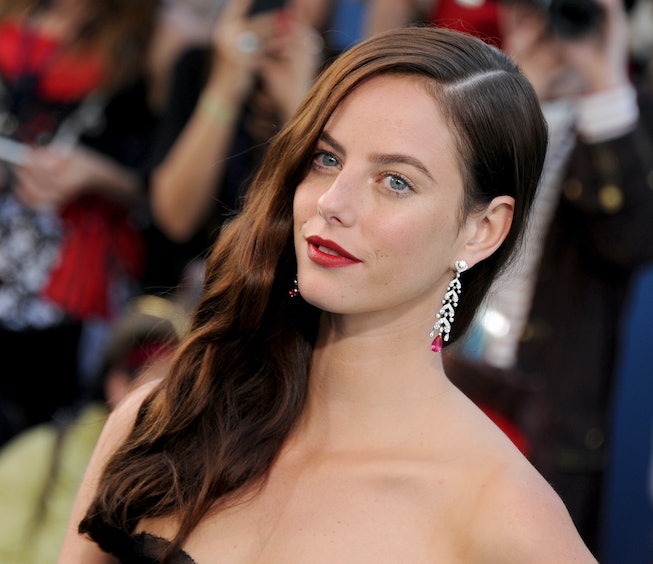 When I was in high school, there was nobody or cooler, or more disturbed, than Effy Stonem on Skins, the British drama that followed a group of Bristol teenagers through two years of “British college,” or high school-aged years. Played by Kaya Scodelario, Effy was all kohl eyeliner, dark hair, fishnets, and cutoff band tanks. She’d take MDMA at a Crystal Castles concert on a school night at a basement club, stare at men with her ice blue eyes until they fell in love with her, swig vodka out of the bottle, and wouldn’t speak unless absolutely necessary. But behind her cool facade, she was a severely depressed addict.

Effy isn’t unlike the self-hating Rue on Euphoria, a show that’s been compared to Skins since its release, for its similar portrayal of the dark realities of being a teenager. Now, Scodelario is watching Euphoria, which she posted about on TikTok on Monday. “Watching euphoria for the first time thinking this is crazy for 17 year olds then remembering what I was doing on TV at 14,” she wrote on a video of her looking at a screen. “Will always be greatful. But yeah safeguarding really wasnt a thing back then...” reads her caption.

Fans commented similar sentiments, acknowledging the controversial nature of Skins that undoubtedly informs Euphoria. “Effy makes Euphoria look like a Disney show,” one user commented. “Euphoria is like the PG version of Skins,” another said, while another said: “Effy will always be the blueprint, Skins walked so Euphoria could run.”

One user asked a question that a lot of us are dying to know: “Do you think being on skins affected your mentality at that age?” Surprisingly, Scodelario answered: “Yes. It was a beautiful time but also the deep rooted cause of a lot of my issues now. Still, it gave me the opportunity to do the job I loved.”

Scodelario was only 14 when she was cast as Effy. She had no prior acting experience, but auditioned for the show after the casting director spotted her walking by open auditions, which were being held near her school, and asked her to read.

Skins was a lifeline for me in high school, but it was a lot for a 14-year-old. Skins was so dark: It dealt with addiction, pregnancy, eating disorders, mental illness, and class issues in a way that felt like only British TV could. It was controversial, but gained a swift cult following as well as launched the careers of Dev Patel, Hannah Murray, and Daniel Kaluuya, who were all unknown at the time. There was briefly an American remake which aired one summer on MTV, but was thankfully cancelled after one season.

“We were teenagers and we weren't ready to face the realities of our situations. And Skins was so odd because we were experiencing things in real life as we were filming them. We were all going through our first loves, or our first breakups, or leaving home and arguing with our parents, and suddenly trying to look after our finances, or finding a place to live,” Scodelario told InStyle in 2020, adding that the cast is still extremely close, and has Christmas together every year. “And it was extremely stressful for all of us. I think it's the reason why a lot of us are still friends now, because that experience was so strange. And now we finally talk about it — when we have dinner and sit around, we discuss how we felt at the time when we were filming.”