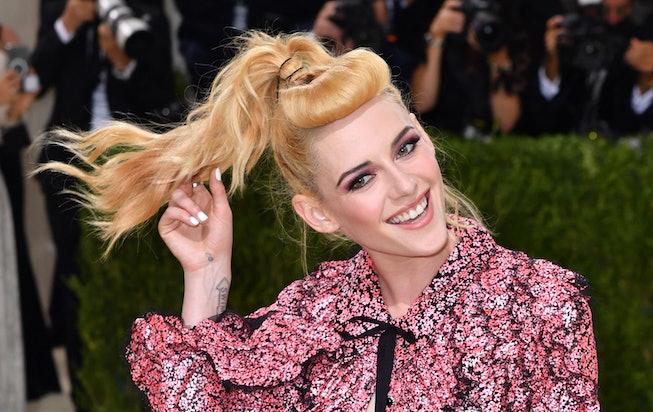 Kristen Stewart and her now fiancé Dylan Meyer are engaged after two years of dating — and K-Stew Hive couldn’t be happier for them. Neither could Jimmy Fallon, who talked about Stewart’s engagement with her on The Tonight Show on November 3.

“Also, knocked it out of the park, just saying,” Stewart told Fallon after he congratulated her. “I scored.” Precious! Fallon and Stewart then talked about how being married means you have a buddy to do stuff with all the time. “We have to, like, help each other out with stuff too,” she said. “You gotta do the stuff I don’t wanna do, man.”

They continued to chat about how cool Stewart is now but, how she wasn’t always cool, which is a thing celebrities love to say. She did share that she was mean to someone once in kindergarten, throwing nachos in someone’s face because they were mean to her. “It was so impulsive. It came from a deep-seeded resentment in me, but like who do you think you are? Is that funny to you?” She’s happy to report she’s never been a bully again.

Fallon also talked to Stewart about the real reason she was there: her role as Princess Diana in Pablo Larraín’s Spencer. Fallon said of watching the film, “I got lost. I thought it was Diana for awhile.” Of course, you can’t believe anything this jester says — he historically simps over all of his guests (including President Donald Trump), but based on the trailer and clips we’ve seen: He’s not wrong; there’s something uncanny about Stewart as the People’s Princess.

“It’s so muscular, It’s exhausting,” Stewart said of speaking in Diana’s accent. “When I speak I feel like I don’t open my mouth and I feel like this croaked frog. Words comes out of her mouth like bubbles and I’m like bricks to the floor.”

She continued: “If you cancel out all of that noise, she’s so sparkly and she’s so completely complicated and difficult to understand and we lost this person too early and we’re never going to have the information we want to have. Her connection to people matters. The reason we’re telling this story still is because she reached out and touched people in a way that nobody really has, especially in that environment.”

Anyway, watch the full interview, below. I highly recommend watching long enough to see where Fallon showed a clip of Stewart in her first acting role from Flinstones: Viva Rock Vegas where she played the ring toss girl and you can see about two seconds of the back of her head.