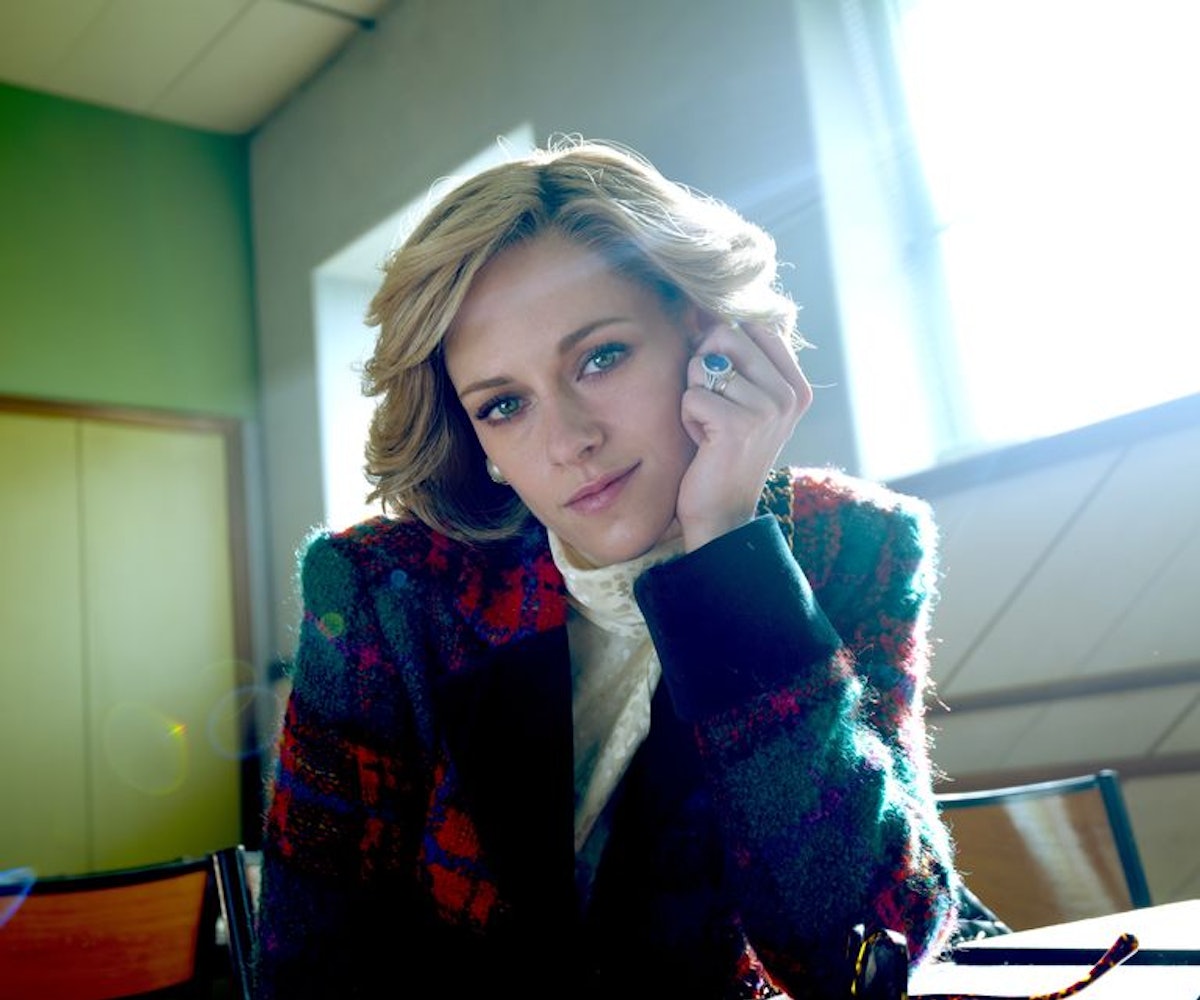 Pablo Larraín’s Spencer offers an idiosyncratic, intimate take on Princess Diana as an influential woman who could barely escape the public eye. The film takes place during a short but dramatically rich period in 1991, in which mounting tensions in her personal life came to a head during a Christmas holiday at the Queen’s Estate. Kristen Stewart plays Diana with an unforgettable mix of fragility and barely-concealed frustration.

Though Spencer only covers a few days in the Princess’ short life, it features a wide variety of gorgeous costumes from designer Jacqueline Durran, who previously won Academy Awards for her work on Anna Karenina (2012) and Little Women (2019). She has plenty of experience in period pieces, and has worked with acclaimed directors like Mike Leigh and Joe Wright multiple times. Durran’s costuming throughout Spencer offers an impeccably tailored and elegant take on late ‘80s and early ‘90s silhouettes, and perfectly blends the familiar iconographies of Diana’s style with boldly creative flourishes.

Ahead, we spoke to the designer about the joys and challenges of creating the wardrobe for one of modern history’s most stylishly influential women.

The costumes are meant to be a source of tension throughout the film.

The significance of fashion in Spencer goes deeper than the film simply featuring memorable costumes. Rather, costuming is built into the story. Racks and racks of fancy clothing prepared with tags indicating their exact moment to be worn by the Princess clearly show how Royal fashion can be stifling in its adherence to old school rules. “Even the very first time I spoke to Pablo, he explained how he wanted the clothes to be embedded into the structure of the film, and how central they were, and how much he wanted to coordinate the sets and the clothes,” says Durran.

Diana’s outfits look just as classic as her palatial surroundings, and neither the clothes nor the settings allow for experimentation. Diana even has a personal dresser (played by Sally Hawkins), who is also one of the only people she trusts. “Most of the clothes you see Diana in are formal clothes, the ones that are set by the family and her dresser, more presentational clothes,” Durran explains. “She has far less chance to be the more relaxed version of Diana that we are also very familiar with. There’s a kind of dual nature to her costumes, in the sense that there are the ones that she’s chosen as her own wardrobe and the ones there to represent her as Princess of Wales.”

The research process was pretty overwhelming.

Costuming a film about one of the world’s most photographed women was not without its challenges. “There’s so much to reference. I suppose in some ways you can almost justify anything. If you scroll long enough and you’re looking for a certain look, you’ll probably find it,” says Durran. “My process really was firstly trying to sift through all the images of Diana in that time period of 1988 to 1992 to try to get a sense of how she made her choices and what kind of style she chose over and over again.”

From there, she had to take a highly organized approach: “I went through hundreds, possibly thousands, of images of her and put them into groups, like colors, geometric prints, plaids, and got an idea of the kind of things she did repeatedly in the time period. When I first met Pablo I had these big boards, like montage boards, to show him all these things, offering up things he could respond to and tell me that he liked. I had this fantasy that somewhere there must be a book, a Royal ledger, that wrote down every single outfit she wore and the designer, and the combination she put together. I thought it must exist somewhere, but obviously I couldn’t ask the palace for that kind of access.”

There’s a mix of vintage designer pieces and ones that were custom-made for the film.

Durran clearly had a ton of material to work with for Spencer, unlike some of her previous films. “When I did Mr. Turner, about the painter J.M.W. Turner, I think there was one picture of him. So you use that one picture and imagine around that. With Diana, it’s the absolute opposite. There’s just so much evidence,” she explains. It’s well-known that the Princess wore a variety of high-end designer clothes, and Durran sourced pieces by designers she actually wore, including Chanel, Escada, and Mondi. Diana also often showed national pride by wearing British designers, and Durran pulled pieces from those labels, as well, such as Murray Arbeid, Bellville Sassoon, and Arabella Pollen.

A number of looks throughout were custom-made for the film, including Durran’s favorite: “I was very pleased with the multicolored plaid jacket. I felt like it was really Diana even though the fabric was different and the styling was different, and it was kind of a mixed up version of something she wore. I felt that it was a strong look.” It was a surprisingly difficult piece to make, too. “It looks like it would be easy to do, but it was actually very hard to do because I couldn’t find the fabric,” recalls Durran. “I couldn’t find the size of check I wanted, and I had to get it from a little shop in Cyprus and have it shipped over, and then there was only just enough to make the jacket. I see that as a kind of little personal triumph. It was so ‘80s and so perfect for the date.”

Diana’s fashion legacy has changed over the years.

Diana’s more casual looks have recently found new life as fodder for nostalgic Instagram accounts, and shows like The Crown, along with public figures like Meghan Markle and Prince Harry, have kept the Princess in the public consciousness. “We’re in this weird situation at the moment where how fashionable Diana is has sort of changed over time,” says Durran. “When I was young, in the ‘80s, Royal fashion wasn’t really fashionable. It was sort of on the edge of fashion. Some people wanted to look like Diana but there wasn’t a lot of overlap in terms of street fashion. It was quite separate.”

Decades later, things are different: “Now the way people look at Diana, she’s much more center stage in fashion and has become much more fashionable than she was in, say, 1989, when her fashion was considered slightly more elitist. It’s quite interesting that her position in fashion has changed.” The change in Diana’s fashion legacy is further compounded by the often differing views of Royals by English citizens versus Americans. Durran, who is British, notes, “I spoke to one or two English journalists about this, and we all agreed that we didn’t really take that much notice of what Diana wore, but I think in America maybe you did take more notice of that back in the ‘80s. That was sort of a cultural difference I hadn’t realized before.”

Designing for a period piece set in the recent past combines memory and creativity.

“I’d never really done a film that was set in the ‘80s before,” says Durran. “I really enjoyed it. I enjoyed looking at something I could kind of remember but I had never really been interested in.” Having worked on a wide variety of period pieces, Durran has a good deal of perspective on the genre: “When you’re doing something distant, you use a lot of imagination to fill the gaps in things you don’t know about the clothes and the choices that were made. It’s a mix of history and imagination.”

In the case of a film like Spencer, which is set just around three decades ago, “the closer you get to modern times, the more we understand the clothes and the more detailed the choices become,” notes Durran. “Because we understand the difference between the clothes that people buy nowadays. You know when people are making a statement and you know about class and money and all those kinds of things that clothes signify.”

When it comes to the ‘80s, Durran sees it as, “somewhat in the middle, in the sense that I remember quite a lot about it and understand the choices, but it isn’t quite the modern world.” In all period films, including this one, “You’re trying to create a system of meaning, which makes the audience understand something about the characters from the way they dress.”

Kristen Stewart may initially seem an unexpected choice to play Diana, but she fully embodies the role without resorting to caricature. “I’m blessed to have her playing Diana because she really brought the clothes to life,” notes Durran. “My feeling from having worked with her is that she is just stylish. You can give her any look to wear and she will look at it and assess it and then she can really wear it, because she has such an innate style.” She also pays Stewart the ultimate compliment for being such a fashion muse: “I honestly think that she can make anything work.”