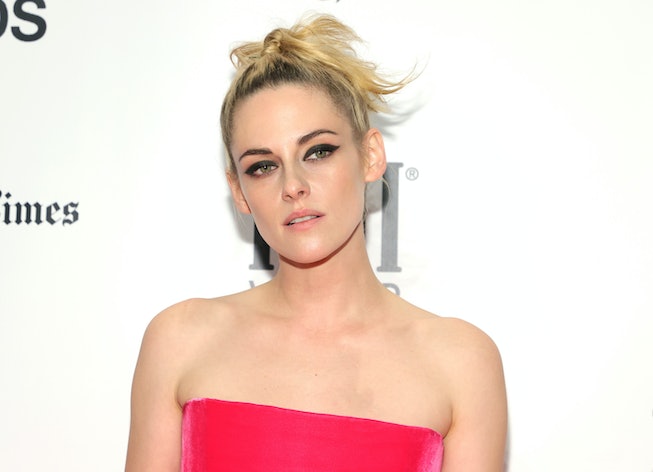 Kirsten Stewart has a lot going for her right now. She’s been dazzling the masses and critics alike with her portrayal of Princess Diana in Pablo Larraín’s Spencer; she’s engaged to longtime girlfriend-now-fiancé Dylan Meyer; etc., etc.. But one thing Stewart has in her wheelhouse that no other actress has is a past paradigm-shifting role so seminal, so legendary, that journalists will never stop asking her about it despite the long-established arthouse turn in her career. And that role is Bella Swan in the Twilight franchise.

More often than not, interviews with Stewart includes some mention of her vampiric past when she’s clearly moved on creatively — it’s been 14 years since the first film. But the Twi-hard fandom is more robust than ever, especially since the franchise hit streaming giant Netflix in 2021 and introduced Bella and Edward’s intense love to a new generation of viewers. Speaking of Netflix, Stewart has no idea the films were there until she was casually browsing.

"I saw that it's on Netflix, and I was like, 'Oh, it's on Netflix,' like it was on there while I was looking through," she said to Entertainment Tonight. "Dude, it's weird because it feels incredibly far away and also still not that far away from me and my time in this film. I don't know, like, on one hand you're like, 'Oh, I'm old, my God, I did this five minutes ago, now it's like 10-year anniversary.' I'm like, wow, I have to go to my high school anniversary already."

There could be many reasons why Stewart was months behind the Twi-Hard update. Perhaps it’s because she was busy promoting her current film for which she’s a frontrunner for Best Actress? There are some mysteries of the world that are meant to remain unknown. Stewart could easily tell what I’m sure is a passionate and hands-on public relations team that no, journalists may not speak to her about anything having to do with vampire eternal love, but it seems like there isn’t any bad blood to be had.

"It's rad, I don't know, I haven't really ... that hasn't touched me yet," she said. "I can't wait for someone who's 12 or 15 to suddenly think, like, it's like when you're little and you tell your parents how great Jimi Hendrix is or something — not to say that I'm remotely comparing my life to Jimi Hendrix — but you know what I mean where they're like, 'Dude, you don't even know, it's like, so sick.' I do, I was in that." Imagining the future children of Twi-hards telling their parents about the immortal residents of Forks, Washington only for them to reveal they are card-carrying members of Team Edward is, like Stewart said, rad.