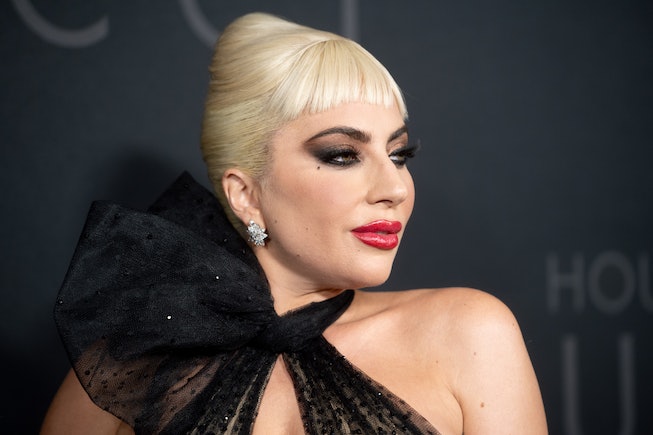 Lady Gaga’s press junket for House of Gucci is getting campier by the week. Since the release of Ridley Scott’s House of Gucci, where Gaga play Patrizia Reggiani, the infamous wife of Maurizio Gucci, we’ve heard about how Gaga voluntary wrote a secret 80-page biography of Patrizia in preparation, how she spoke in an Italian accent for 18 months, and how she had to hire an on-set psychiatric nurse to support her in her “extreme role.” Now, the singer and actor is revealing that Patrizia Gucci — who is alive and well in Italy — may have sent a “swarm of flies” to the House of Gucci set.

Gaga shared the details of her haunting in a recent interview with W Magazine for a “Best Performances” spread.

“On the last day of filming, I was on the balcony of my apartment in Rome, and I was blasting Dean Martin singing ‘Mambo Italiano’, and I had a cigarette hanging out of my mouth. I was Patrizia,” Gaga said of her final day on set. “But I knew I had to say goodbye to her: Large swarms of flies kept following me around, and I truly began to believe that she had sent them. I was ready to let her go.”

It’s only a matter of time before Gaga’s fly-swarming story gets optioned for an Oscar-buzzable short of its own. But it begs a bigger question: Did Patrizia put a curse on Gaga? What else causes a “large swarm of flies” to follow around a superstar?

According to Witchcraft In The Middle Ages by Professor Jeffrey Burton Russell, swarms of bees are among the animals most frequently associated with witches, though there was an event in the sixth century where a woodcutter became a heretic after having been surrounded by a swarm of flies. It’s not clear how tapped into witchcraft Patrizia is these days; writer and comedian Jake Cornell called both her and Maurizio “viciously superstitious” upon reading Sarah Gay Forden’s The House of Gucci: A Sensational Story of Murder, Madness, Glamour, and Greed, the book that inspired the adaptation, but perhaps 17 years in prison brought upon a change in judgment.

Patrizia already had some beef with Gaga before the film’s release, telling an Italian newspaper that she was “annoyed” that Gaga didn’t want to come and meet her. “I believe that any good actor should first get to know the person that they are meant to be playing,” she continued. “I think it is not right that I wasn’t contacted. And I say this with all the sympathy and appreciation that I have for her.”

In the meantime, any and all swarms of insects around Gaga will be noted.