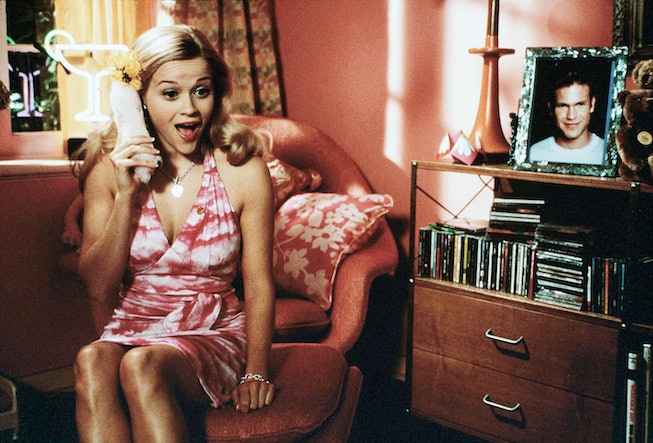 Legally Blonde, famously a perfect film with perfect casting, was this close to becoming an iconic queer film.

The movie’s ending as we know it is triumphant in all of its rom-com glory. Elle Woods frees her client thanks to her extensive knowledge of beauty and hair care, graduates at the top of her class at Harvard Law, is best friends with her former nemesis Vivian, and her doting boyfriend Emmett (who’s not a complete bonehead) has a ring in his pocket and is ready to propose. But the screenwriters and some of the cast recently opened up about the original ending 20 years after the film’s release in an in-depth oral history with the New York Times, and blew our minds in the process.

“The first ending was Elle and Vivian in Hawaii in beach chairs, drinking margaritas and holding hands,” said Jessica Cauffiel, who played Elle’s clueless but loyal best friend, Margot. “The insinuation was either they were best friends or they had gotten together romantically.”

The culture of 2001 would have had its sh*t rocked had that ending actually happened. Would we have experienced only peace and understanding in its aftermath? Who’s to say what the butterfly effect could have been! The only safe assumption is that the fictional and perverted Professor Callahan would have dropped dead in his sleek office from shock, and possibly, jealousy.

Another shocker from the oral history was that Selma Blair was almost overlooked for the part of Vivian in favor of perennial It Girl, Chloë Sevigny. Thankfully, Blair and Reese Witherspoon already had a fabulous dynamic, thanks to freaky little film called Cruel Intentions. (Hollywood, please make fun movies again! You used to be so good at it!)

“I remember talk about getting Chloë Sevigny to play Vivian,” Legally Blonde screenwriter Kristen Smith recalled. “That didn’t work out, and we ended up with our queen Selma Blair. Selma and Reese were close, because they had done Cruel Intentions together. So their friendship is a great anchor for everything.”