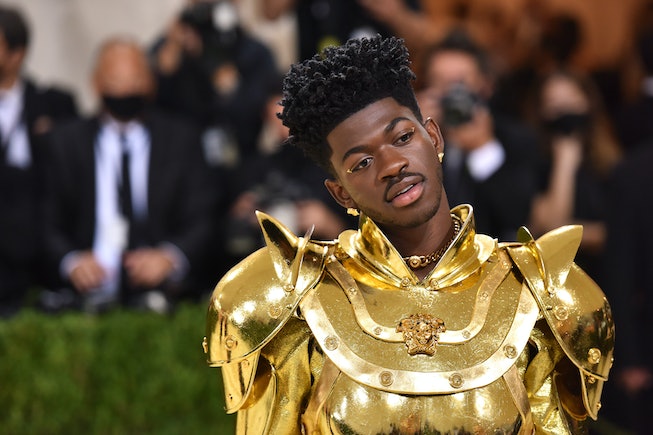 Lil Nas X, who I’d gladly give my firstborn child to except that he just gave birth to Montero, a perfect album, performed a dreamy cover of Dolly Parton’s “Jolene” in the BBC Radio 1 Live Lounge, in a video released September 21.

This marks the singer’s first time in the BBC Radio 1 Live Lounge, and the performance was relatively tame compared to the leather-clad pole dancing of his Saturday Night Live appearance. On the BBC, he wore a white, short-sleeved suit and stood at a flower-covered, bejeweled microphone for his performance. In an interview, he explained, "This song is kind of like beautifully sad, you know? I like the little twang, like the country twang in it. So I was like, 'Lemme try this out.’”

Lil Nas X did unleash a noticeable twang for the cover, hearkening back to his “Old Town Road” country roots, particularly on the lines “your beauty is beyond compare/ flaming locks of auburn hair.” It’s a much-covered song (while we’re here, listen to Miley’s backyard sessions cover, whew!), and while most artists belt the chorus, Lil Nas X kept it smooth and grounded with no vocal embellishments, looking the camera directly in the eye as he croons, “please don’t take him just because you can.” The understated performance gave the whole song a kind of confident reverence for our queen Dolly, as well as emphasizing the sadder side of the song, which famously works both as an anthem and a ballad. He is, after all, a man of class!

Covering Dolly is also kind of a nod to his collaborations with the Cyrus fam: Lest we forget that Dolly is Miley’s godmother, which is the plot of an entire Hannah Montana episode. And Dolly actually was asked to be a part of an “Old Town Road” remix, but declined. “Well, I’ll wait and do something later on. No point in going down that same Old Town Road,” she told Elle. “We got other roads to travel.” We don’t deserve it, but is the world finally ready for a Dolly x Lil Nas X collab? We can only dream.

In addition to “Jolene,” Lil Nas X performed two songs off Montero: “Dead Right Now” and “That’s What I Want” — which is inspiring us all to raise our standards in men.