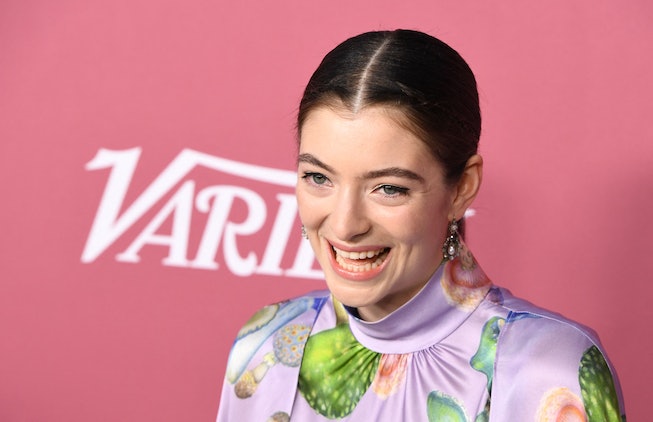 Lorde wants you to shut up during just one of her songs. At least, that’s what it looks like in a TikTok compilation of Lorde shushing fans who were singing along to “Writer in the Dark” during her Melodrama tour. The singer is seen in multiple fab outfits, putting a finger to her lips to get everything to be quiet, before she launches into an acapella verse. Normally, Lorde wouldn’t respond to a video like this. The singer is known for her offline presence (save for an Instagram account dedicated to rating onion rings.) In fact, she’s historically been so offline that when posted a promo Solar Power promo photo of her butt, it was all anyone online talked about for a day. But questioning her artistic practice is another thing, and Lorde shared a new video via the fan account @lordecontent to address shush-gate.

"OK, I just woke up. I just wanted to talk about this thing of me shushing people at my shows," says Lorde, confirming that she had in fact just woken up by leaving her eye mask on. "That was something I did in that one song, a couple of times, when I wanted to sing it a capella and/or off the microphone so people could hear me and because I wanted to try something different."

“If you come to my shows, you know it's like an hour and a half of all of us singing and screaming together," Lorde continued. "Also, that dramatic ass move was literally for an album called Melodrama, so don't stress too hard."

Later that night, at a show in Chicago on her Solar Power tour, Lorde performed “Writer in the Dark,” for the first time since 2018, and acknowledged the oh so controversial decision to ask people to be quiet for one song of a concert.

“The internet has decided that this was very bad and very rude,” Lorde said of the shushing, mentioning that she was 19 and “very dramatic” in the mashup's clips and had “a lot of feelings.”