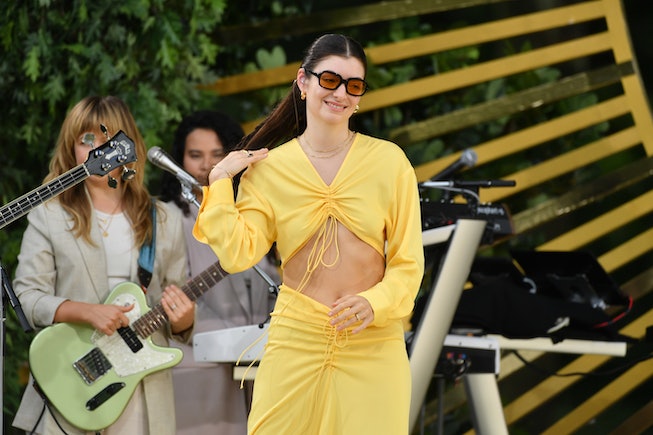 Lorde’s highly-anticipated Mood Ring might have been kind of a sleeper, but an album release for an elusive musician means press. For this album cycle, that’s meant learning Lorde wants to work with Harry Styles or watching her get delightfully wasted with Seth Meyers, but now — Lorde’s October Vogue cover has done the greatest act music journalism can do: resurrect her onion ring Instagram account.

Lorde posted on her only, very elusive social media account @onionringsworldwide Wednesday morning, an account where the singer posts only photographs of onion rings. Today’s post is only her 10th since 2017.

“Gracing the cover of the great American fashion book is a very special day for any young witch however you slice it. But if you slice it, dredge it in batter and then lower into a deep fryer? Cannot be topped!!! The story might be full of interesting morsels, but the REAL exclusive is right here on ORWW — the rings that were ordered on the drive back from the shoot.

She continued, writing that the rings were from Humboldt Brewery, which is certainly about to go out of business due to over-demand. She also wrote she was “delirious from 2 days of 4am starts and immersion n very cold water” (oh, the life of a pop star in a press cycle!), but that the rings “appear to be golden and glistening with a shattery coat.” She gave them a rating of 3/5.

Obviously the onion rings are the story here, but she did also talk about her basically nonexistent social media use in the interview, sharing that she “recruited a coder friend to block sites in the source code of her devices.” Unclear what CIA-level blocking we’re talking about here, but maybe she borrowed someone’s phone to post her onion ring pics. “So I’m not, like, lurking on a Finsta. I’m really off,” she said in the interview. Okay, you don’t have to brag!

She also talked about how she generally feels about fame, which, in the vein of Billie Eilish, isn’t great. “I’m great at my job, but I’m not sure I’m the man for the job,” Lorde told Vogue. “I’m a highly sensitive person. I’m not built for pop star life. To have a public-facing existence is something I find really intense and is something I’m not good at. That natural charisma is not what I have. I have the brain in the jar.”

The cycle of Lorde is that she’ll do a ton of press for an album and then disappear for four years, leaving fans to pick up cryptic clues she leaves in email newsletters — a cycle she acknowledges in the interview:

“But for whatever reason people have allowed me to say, okay, I’m going to come and do the thing — do the shoot, do the red carpet, speak to the journalists, put the music out — and when I’ve done it to the point of total exhaustion, when I have completely quenched that thirst, I’m going to go home, and you’re not going to see me for two or three or four years,” she said. “I’ll be doing the other thing, which is being there for every single birthday and dinner party and cooking every single meal and going on every single walk and taking every single bath. And when I’ve done that, and I’m like, all right, that’s enough of that for a little while, I’ll come back again.”

We can feel Lorde starting to ascend out of our orbit — but at least she’s leaving onion rings in her wake.