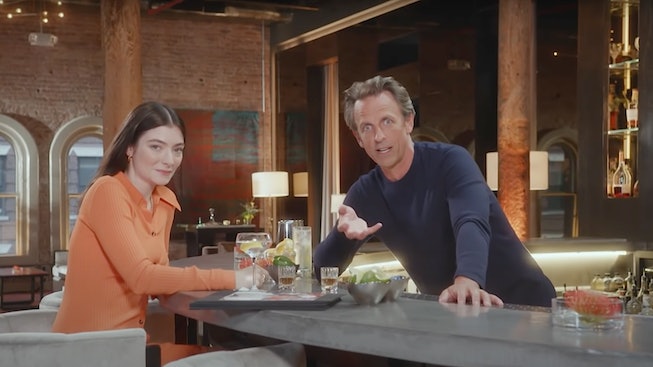 There’s no bigger indication that a celebrity is back than a corny late-night TV segment — and on June 21, Lorde solidified her return while appearing on Late Show with Seth Meyers to promote her upcoming, highly-anticipated album Solar Power.

Meyers got to live out our dream and get plastered with Lorde in the middle of the day. They started out with an Australian beer (which Lorde hated, so she switched it out for a chic martini), and then creating drinks based on Lorde songs. The “Solar Power” was a mix of iced coffee, Red Bull, espresso beans, and Four Loko, which Lorde had — bless her — not heard of. They also drank a cocktail based off Lorde’s song “Ribs,” which was a glass of gin with a pork rib dipped into the glass.

Meyers and Lorde also played a game where they both had to guess the meaning of New Zealand and New England slang terms and, in a segment called “Royals,” had to guess members of the royal family based on photos, and had to take shots when they were incorrect. A running gag of the segment was whether or not Seth Meyers could remember Lorde’s real name (Ella Marija Lani Yelich-O'Connor, in case you need a reminder), which he failed to do several times, and had to drink each time he got it wrong.

Needless to say, they both got pretty tanked. During a segment while they’re painting replicas of Lorde’s Melodrama album cover, Lorde says, “I've watched this before. Like, who knows, are they drunk? But, like, I'm drunk,” before proclaiming that her painting was better.

"I almost can't even talk about it. I can't look at an alcoholic drink ever again,” she told Meyers about the aftermath of her day drinking experience. “You did kind of destroy me and I had to get a very pop star thing: an IV drip.”

Lorde also performed “Stoned At The Nail Salon,” with Jack Antonoff, during which she was (probably) sober.